Bankers Acceptance (BA) is a short-term money market instrument that comes in handy in international trade. It helps to eliminate the payment risk, in the case; the supplier and buyer do not know each other and belong to different countries.

Basically, it is a time draft that a business can get from the bank as an extra cover against counter party risk. Here bank promises to pay the exporting firm a definite amount on a specific date after it recovers its money by debiting the importer’s account. In simple words, you can understand BA as a post-dated check from a bank.

Fed’s aim was to boost United States trades and make the US banks more competitive. At the time, National banks were given the authority to accept time draft, while the Fed had the authority to take over some eligible bankers acceptances.

The eligibility criteria included bankers acceptance finance self-liquidating transaction with a maturity under six months. Fed, however, no more buys BA. Still, the eligibility requirement holds significance as there are no reserve requirements in case a bank sells an eligible acceptance.

Bankers acceptance could be in the form of drafts, letter of credit or any other financial transactions. Thus, it works in various ways.

For instance, an importing company looks to buy goods from an exporter and approaches the bank because the seller is not granting credit. Importer and the bank execute an acceptance agreement, under which the bank will accept a draft from the importer or buyer, who promises to payback the face value of all the drafts before their maturity to the bank.

Importer, thus, draws a time draft, listing itself as the payee and the bank accepts the draft, thereby paying the importer the discounted value of the draft. The buyer then use the funds to pay the seller.

Talking of another way in which BA works is seller agreeing to accept a letter of credit (LoC) from the importer’s bank. The LoC will specify that the bank would accept time drafts from the seller only if they (seller) provides proper delivery documentation. In this case, the seller is the drawer and payee of the draft.

It must be noted that the importer’s bank usually transacts with the seller’s bank, and not with the seller directly. The seller may realize the money from BA in a few ways, such as discounting it, selling it, or holding it till the maturity.

A business that wants to get BA should approach a bank with which they maintain a good credit rating and relationship. You should be able to offer collateral (or prove you can do so) against the ability to repay the bank at a future date. However, not every bank gives the facility of bankers acceptance. The business has to go through credit checks and may be underwriting process as well. Bank charges a percentage of the total acceptance amount as fees. 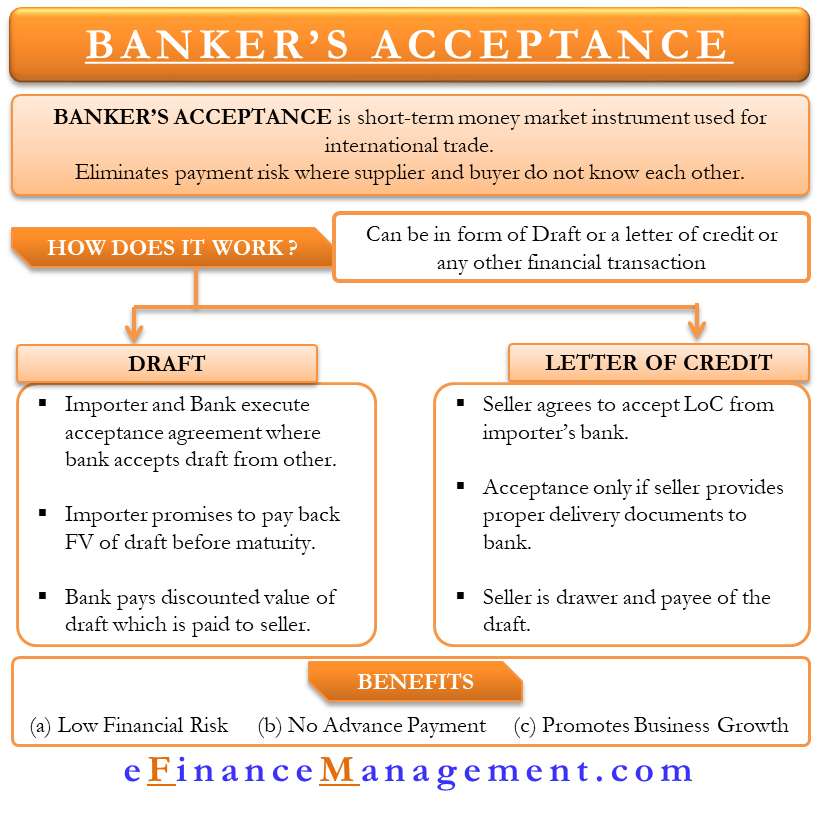 Sellers will be more interested in dealing with buyers, who are backed by a known and reputed bank. A buyer with BA is usually less risky than the one without it. Also, the interest rates on BA are low when compared to the benefits that a buyer can garner from it.

Since the buyer has a good relationship with the bank, he or she does not have to worry about making advance payments. And, as both buyer and seller do business, they build trust, and overtime, they don’t need any BA. Thus, we can say, BA helps to build trust between the parties.

A new buyer with BA will always attract more sellers in comparison to the buyer who does not have any guarantee from the bank.

Talking of disadvantages, it has one major one. Not all banks deal in BA, and even the ones that do, will evaluate you fully before agreeing to anything. In some cases, banks may even ask you to give collateral as well.

It is important to understand that bankers acceptance is deemed as an obligation on the accepting bank. Thus, a payee can sell the bankers acceptance depending. Selling BA means selling the time draft, but it will sell at a discount. The discount will depend on the time period left for the maturity and reputation of the bank.

Because of this, BA is tradable in the money market and is an effective short-term instrument. There is a big and liquid secondary market for such instruments. In the secondary market, these instruments are usually sold at prices slightly less than London Interbank Offer Rate (LIBOR).

A point to note is that BA does not trade on an exchange. These money market instruments trade through large banks and securities dealers. Therefore, there are no formal bid and ask prices, rather investors negotiate the prices. As said above, the negotiations majorly depend on the size and goodwill of the paying back. For instance, a BA from a bank with a strong credit rating usually sells for lower yield since the chances of default is less.

What if Bank Fails?

Bankers Acceptance is a safe and secure money market instrument, and banks are primarily responsible for making the payment. However, in case, if a bank somehow fails to honor a BA, what happens to the investor or seller?

A point to note is that along with the bank, other related parties are also responsible to the investor. So, if a bank fails, the onus lies on the importer to make the payment. Truly speaking, any party that has purchased or sold the BA has an obligation.

Bankers Acceptance is not only a useful tool for international trade; it is a good investment option as well. Investors can add it to their portfolio to compensate for the high-risk securities, while businesses can use this to eliminate risk.1,2

Last updated on : November 16th, 2019
What’s your view on this? Share it in comments below.
Pin It Tweet