A Swingline loan is a type of loan that helps the lender to pay the existing debt or loan. It is a large amount of loan, but for a very short duration (average of 15 days) and on shorter notice. The interest rate on such loans is higher than the usual loan.

It can be a separate loan or a sub-limit of a company’s ongoing credit facility. The primary purpose of this type of loan is to meet the borrower’s cash management needs. For instance, if the quarterly sales of a new company are not as per the expectations, it may resort to Swingline loan to pay some of its creditors.

Swingline Loan – How They Are Different?

Swingline Loan may appear very similar to any other lines of credit as they also help to meet temporary shortfalls in cash flow. However, there are many differences between Swingline loans and other loans. 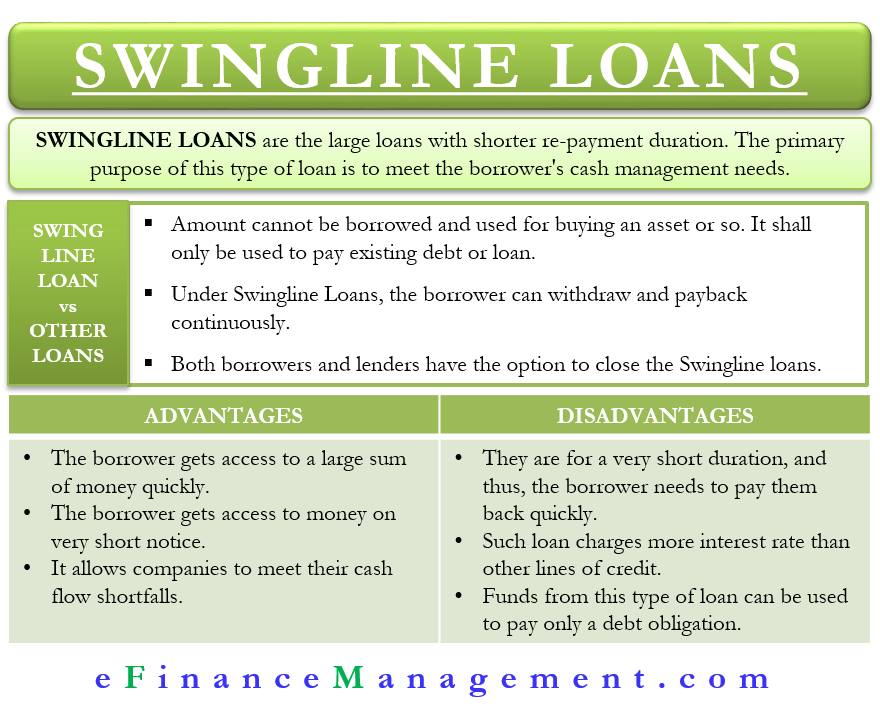 Let us understand the importance and need for Swingline loan with the help of a real-world example.

In 2011, ACCO Brands and MeadWestvaco Corporation decided to merge a unit of the latter into ACCO. ACCO manufacture office products, while MeadWestvaco is a big name in the world of packaging.  The total value of the deal was about $860 million.

Due to the deal, ACCO had to refinance all its existing debts. Its new capital structure was $500 million in high yield bonds and about $750 million in term loans. Also, the company had two revolving credit facilities – $200 million in US dollar and $50 million in other currency. The $200 million revolving credit facility, included commitments from a syndicate of 16 banks. Commitment from each bank would range between $4 million to about $20 million. Moreover, ACCO could use this facility for letters of credit (LoC) and general liquidity needs.

It means if ACCO needs $100 million, all it needs to do is contact the leader of the syndicate. But, what if ACCO requires just $5 million for five days. If it makes use of the $200 million revolving credit facility, then it needs to follow the same process of sending a notice to the syndicate. However, if all 16 banks contribute, then the commitment of the smallest bank could be minimal. The bank would get very less interest, which may not be enough to meet the administrative expenses.

In such a case, having a Swingline loan could prove beneficial. So, instead of asking all 16 banks, the company can rely on one bank for the full amount. Even though only one bank in the syndicate provides the fund, the risk needs to be borne by the entire Syndicate. ACCO had the swing line limit of $30 million.

Following are the advantages of Swingline loan:

Following are the disadvantages of Swingline loan:

A bank or a financial institution may make Swingline loans to companies, as well as individuals. For individuals, such loan is very similar to the payday loan, i.e. they are quick loan. But, the borrower also has to pay a comparatively higher interest rate on such loans than other forms of loans, such as a personal loan.1