A Certificate of Deposit or CD is a short-term money market instrument that allows a user to utilize their savings effectively. It is basically an agreement between an investor and a bank, where the former agrees to put a fixed sum of money for a fix time period. In exchange, the bank agrees to pay interest on the amount deposited.

We can also call them a special form of term deposits that are traded in the secondary money market. The yield to maturity of the Certificate of Deposit determines its trading price. The interest rate on the CD can be fixed or variable, and regardless of its duration, it is mandatory for the bank to pay the interest on time.

CD’s help banks to collect funds to make loans. The interest that the bank pays on Certificate of Deposit is less than what it charges for the loan. This allows the bank to make a profit.

Features of Certificate of Deposit

The short-term CDs are usually for upto a year, and have no coupons or interest payment. At the end of the maturity, depositors get the principal amount and the interest due.

In the case of a long-term CD, the bank pays coupons (or interest) at regular intervals, such as every quarter or six months. Also, a long-term CD gets a higher return in comparison to a short-term CD. This is because the risk is higher in the long-term as the holder holds the certificate for a longer term, resulting in more uncertainty.

How Interest Rates on CDs Are Set?

The funds that a bank can get from the nation’s central bank (Federal Reserve) costs the lowest. However, banks could only use these funds for very short-term reserve requirements. To meet their other requirements, banks borrow from other banks at the Libor rate (London Interbank Offer Rate).

Another rate that helps in deciding the rate of interest on CDs is the prime rate. It is the lending rate that bank charges from its best customers. Banks must rate CDs below the prime rate, in order, to make a profit.

The interest that the bank gets from the borrowers is its income. Banks expenses are the interest paid to the depositors of money market accounts, other banks, and CDs. Thus, to make a profit, the interest rate on CDs should be more than the fed funds rate, but less than the prime rate. 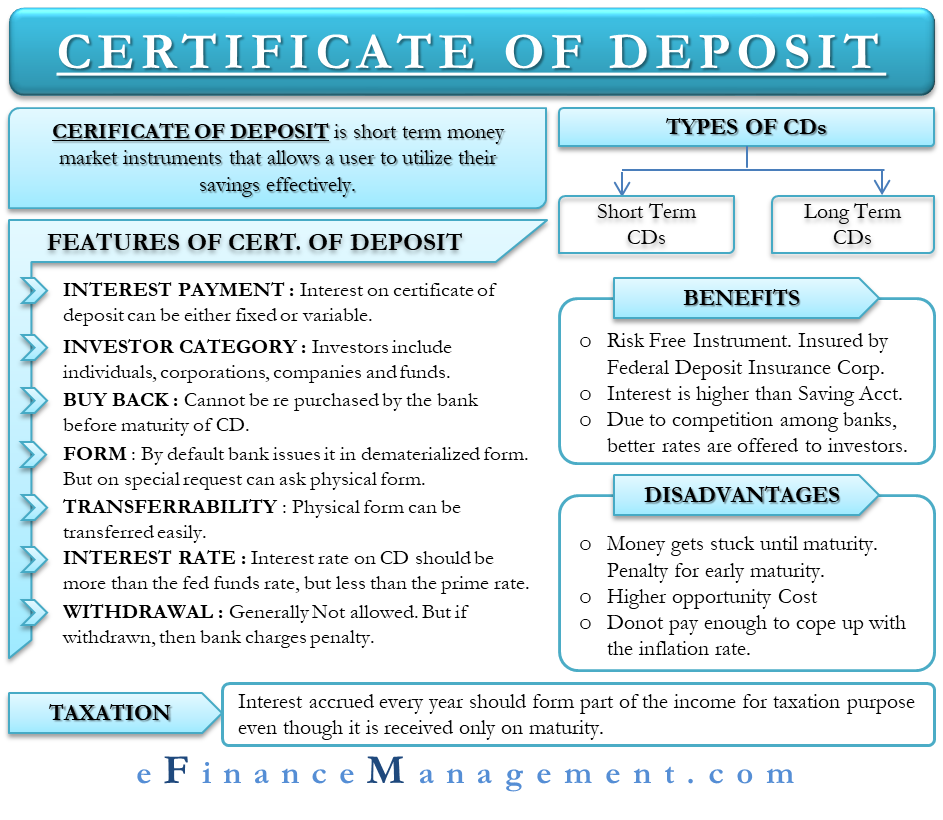 Early Withdrawal – Is it Allowed?

As said above, the Certificate of Deposit is for a fixed period, so the depositor is not expected to withdraw it early. However, banks do allow an early withdrawal, but charge a penalty for it as well. The penalty amount will depend on the duration left for maturity. In general, the penalty equals the interest rate.

Benefits of Certificate of Deposit

Money Market Accounts and Funds – How They are Different?

Since CDs are a source of funds for the money market deposit accounts, the interest on the latter is less. However, it offers the flexibility to withdraw funds anytime without any penalty. Also, FDIC insures these deposit accounts, so there is no risk.

Talking of money market mutual funds, they invest in CDs and other financial instruments as well. It also allows you to take out funds anytime, but FDIC does not insure it.

How to Choose a CD?

Below are the few useful guidelines that could help you to choose the best Certificate of Deposit;

If you have a CD, the bank will regularly credit the interest amount at regular intervals, like every quarter or after six months. When a bank credits the interest, the same will show up in your account as interest income. Thus, similar to other interest income, you should also report this as part of your income when you file a tax return.

Most people, however, feel that since they can’t actually withdraw the interest on CD when the bank credits them, they should be taxed only at maturity. This is wrong as interest becomes taxable as soon as the bank adds it to your account.1

1.
Karl S. What is a Certificate of Deposit (CD)? Investopedia. [Source]