In Invoice discounting the company is liable to collect payments from its customers. Generally, a company can borrow up to 80% of the invoice amount within 24 hours. The actual percentage and duration may vary with different financial institutions and banks. This is very widely used by companies for immediate cash requirements and is one of the working capital sources.

In other words, it is a process in which short-term advances are extended in lieu of unpaid sales receivables. The tenure of the loan is very short. The finance company charges interest on the advance made as well as a monthly maintenance fee from the borrower.

It is important to know the advantages and disadvantages of the invoice discounting technique in order to use it effectively.

Invoice discounting is comparatively quicker and faster method to procure cash than applying for a Cash Credit in which credit institutions or banks take quite a lot of time in credit appraisal of the borrower. Invoice discounting provides liquid cash to business as soon as an invoice is issued. It accelerates cash inflow by converting sales receivables into cash. The cash injection can be invested in increasing sales, pursuing growth, capital investment, repaying critical debts etc.

Invoice discounting releases cash that has been locked in customer invoices for a long period of time. Invoice discounting converts the company’s account receivable (debtors) into liquid cash. This may even be used in cases of emergencies.

Collection period refers to the time taken by accounts receivables to realize into liquid cash. The collection period is generally the credit period allowed. Invoice discounting facilitates the provision of finances by taking an advance from the invoices issued. Thus, a businessman may collect his blocked funds without waiting for the entire credit period against a fee.

No Asset as Collateral

Cash can be obtained without using any assets as collateral; only invoices to which customers are yet to pay are submitted for the transaction. Discounting houses require just account receivables as collateral. No inventory or other movable item is pledged/hypothecated. Hence, entities which have a huge amount of pending receivables can release the blocked funds. As the discounting companies require single collateral, i.e. book debts, other movable assets of the business are free to raise additional finances.

No Effect on Business Relations

The business relations between the seller and buyer are not hampered in case of invoice discounting, unlike the case of factoring. Discounting companies have no contact or correspondence with the buyer. Hence, the buyer is sure that he would continue to be liable to the seller, not to other parties.

The company can choose to grow sales in terms of cash or credit. Sales that are on credit can be converted into cash quickly and the company need not bother much about the liquidity issue which comes with credit sales if invoice discounting process is in place. 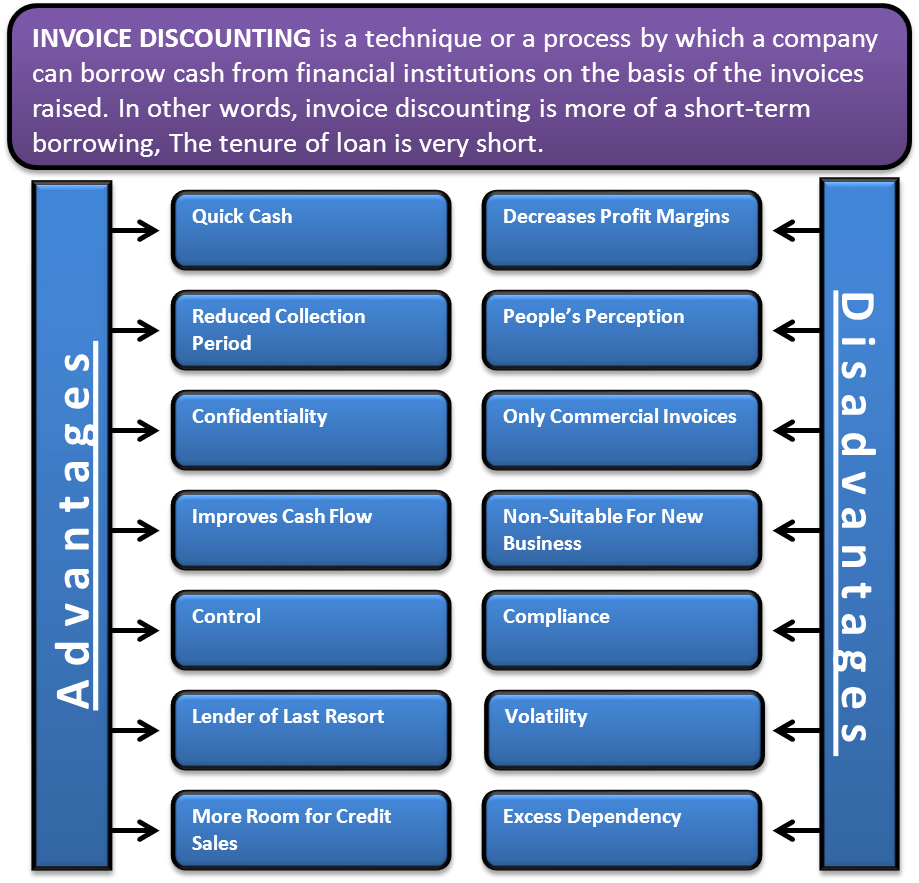 The seller continues to exercise control over the sales receivables. He has the sole right to manage the credit terms, negotiate further deals, collect the payments etc. In short, the loan agreement remains between the borrower and lender. The lender does not get to deal with the accounts receivables.

In the case of invoice discounting, confidentiality can be maintained by the discounting houses. The suppliers and customers need not know about the borrowings of the company against sales invoices. The financial agreement between the borrower and the lender is not disclosed to buyers. Unlike factoring, the buyer does not get an idea of the financial agreement from the lender.

The borrowing company can obtain the cash it needs whereas the customer can be given the credit period. This creates a win-win situation for the company and the company’s customer which in turn helps in building a healthy relationship with customers.

The discounting companies are a sort of lender of last resort. This type of finance opts when other sources are not available. Hence, a businessman can always rely on invoice discounting during his cash crunch time. The finances are released generally within 48 hours, depending on the lender’s policy.

The financial institutions providing invoice discounting generally charge a fee which becomes an additional cost to the company. This decreases the profit margins for the borrowing company. Presence of interest charge and maintenance fees levied by the lender directly impacts the profitability of the borrower. The interest rate is significantly higher than the usual rate of borrowing.

The majority of financial institutions allow borrowing only on commercial invoices. If a company deals with general public then that company may not be eligible for invoice discounting.

Excessive usage of invoice discounting facility may cause management to be non-focussed on strengthening credit norms for debtors. The company should ideally be focussing on shorter credit periods and not invoice discounting as a mechanism to improve working capital cycles and liquidity.

This type of finance is not suitable for new business entities as it would affect their financial statements in a negative way. Their profits are not significant enough to absorb extravagant interest costs and maintenance fees. Presence of high-interest costs in a startup is always a bad sign for any kind of prospective investor too. It is especially recommended for high-profit ventures that need additional funds to pursue extra growth.

The lender is required to furnish a statement of accounts receivables to the discounting company at regular intervals. It burdens up the administrative and compliance aspect of the entity.

The amount of loan that can be extended is highly volatile. It changes with the change in accounts receivables present at a particular point in time.

Too much reliance on invoice discounting makes the entity carefree about the receivables department. The company would have no regard for the credit monitoring of the customers, whether the book debts are being realized within the credit period etc.

Sales receivables constitute a big part of current assets held by a business. Current assets (Inventory, Receivables) are generally pledged for working capital finances. The receivables against which the loan has been obtained will no longer be available for further debt arrangements which would curtail the drawing power.