A consignee, in most cases, is the receiver of the goods. But, in some cases, there is an intermediate consignee who receives the shipment on behalf of the ultimate consignee.

Mrs. Pincha, (Consignor) wants to sell her homemade pickle, but don’t have a customer base. She decides to enter into consignment business, where the retailer or wholesaler (Consignee) takes possession of her homemade pickle and sells it to its outlet’s customer on behalf of her. Mrs. Pincha may receive some advance against the consigned goods or receive the full amount by the retail outlet on sale after deducting its commission.

It is a win-win situation for both Mrs. Pincha and the retailer. The consignor – Mrs. Pincha gets access to a new market for her homemade products and the consignee- the retailer earns a commission in return for the sales.

Briefing a few points about the consignee (Retailers) from the above example:

Difference between Consignee and Regular Purchaser 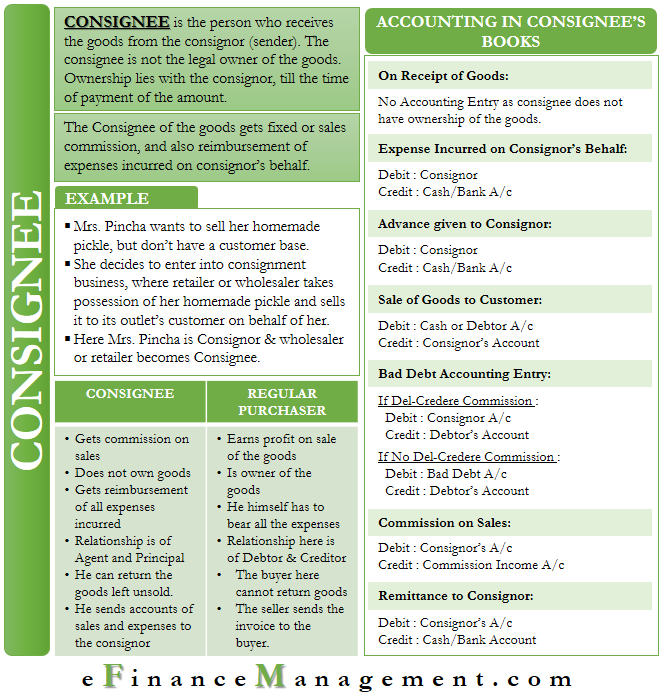 Accounting Entries in the Books of Consignee:

Below are the necessary journal entries passed in the books of Consignee:

1. Receipt of the Goods

2. Expenses incurred on behalf of the Consignor

(Being expenses incurred on goods received on the consignment on behalf of the consignor. )

3. Advance(if any) given to the Consignor

(Being advance given to the consignor against goods received.)

(Being sale of goods received on consignment.)

Note: The consignor is the owner of the goods; his account gets credit for all the sales made of the consigned goods.

There are two types of entry for bad debt:

(Being commission earned on the sales of goods of the consignment. )

7. Remittance to the Consignor for the final settlement of his Account.

(Being payment of the balance due to the consignor)