Budgeting or budget is basically planning all your revenue and expenses ahead. Companies usually project their revenue and expenses for a specific time period, basing it on different external and internal factors. A budget can be for a quarter or half-year or a year. There can be various types of budget on the basis of purpose you want to the budget for and also on the basis of budgeting approaches. Let’s see some of the popular budgeting examples:

Sales budget basically depicts the sales expectations of the company. Let’s see an example of the sales budget. 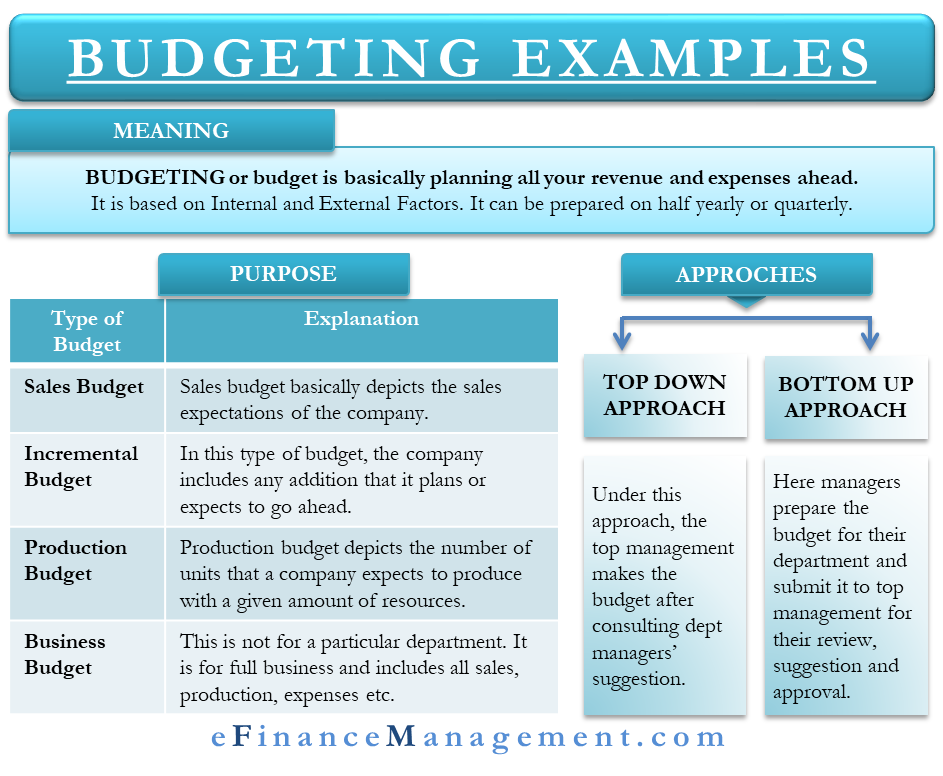 As the name suggests, in this type of budget, the company includes any addition that it plans or expects to go ahead. Let’s see an example of Incremental Budget:

Last year Company A paid a total salary of $500000. For the next year, the company plans to give an increment of 10% to the entire staff. Also, Company A plans to hire four new employees with a salary of $20000 each.  Following is the Incremental Budget for Company A:

Production budget depicts the number of units that a company expects to produce with a given amount of resources. It includes expected sales, inventory and more. Let’s see an example of Production Budget:

This budget is not for any department, rather for the full business, and includes all sales, production, expenses and more. Let’s see a simple example of Business Budget:

Company B has sales of $500000. For the next year, the management expects sales to increase by 10%, while expenses (rent, insurance, Internet, travel, interest) by 10%. Cost of goods sold currently is $200000 and is expected to go up by 5%. Following is the Business Budget for Company B:

Based on the above budget, net income for the Company B increases by $37,600.

First lets us understand the Top-Down Approach. Under this approach, the top management makes the budget after taking into account the goals and objectives of the organization. Management takes suggestions from managers, but they may or may not implement their suggestions.

Following is an example of the Top-Down Approach. Company A has set a target of selling 10000 units of mobiles next year. This is 2000 units more than last year. Since management sets the budget under the Top-Down Approach they were not aware of the last-minute machinery breakdown. Due to this breakdown, the production department will be unable to produce a given number of units. Such a situation could lead to clashes between the sales and production departments.

Now let’s understand the Bottom-up Approach. In this approach, managers prepare the budget for their department on the basis of past experience and available information. Thereafter, they submit it to the management for their suggestions and approval.

Last updated on : January 24th, 2020
What’s your view on this? Share it in comments below.