Though it is a simple approach, most professionals don’t recommend it. Such type of budgeting is suitable for companies with fix funding needs or with little changes.

The Theory of Budgetary Incrementalism (by Aaron Wildavsky in the 1960s) is the basis of incremental budgeting. The theory assumes that department heads are responsible for the budget process and that the budget is revised annually with an increment. This theory remained popular until 1984.

Why go for Incremental Budgeting?

Management goes for such budgeting if it does not want to spend too much time on preparing budgets. Also, businesses go for this approach, if they don’t feel the need to carry thorough re-evaluation of the operations.

One can say that lack of competition in the segment is one major reason inspiring companies go for this approach. Since there is no competition, a company doesn’t feel the urge to do anything extra. So, it continues with a similar budget.

Being easy to implement is a major reason why businesses go for this approach. Also, it does not require a lot of detailed analysis like other budgeting techniques.

Incremental Budgeting favors the programs or projects that require funding for multiple years. The approach ensures that the funding keeps flowing to the program.

Easy to see the impact of change

Budgets are mostly the same year after year under this approach. But, if management makes any change made to it, one can easily identify it by comparing with earlier budgets. 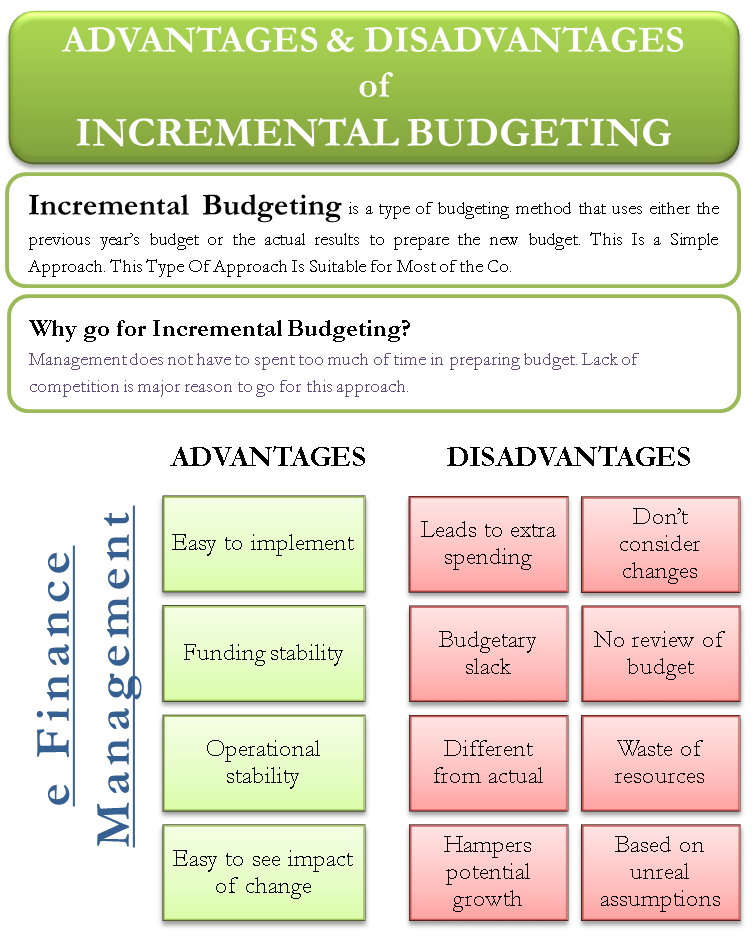 This is the biggest disadvantage of this approach. It is a known fact that each department tries to get as much as funds it can to fund its operations. So, if incremental budgeting is in use, the department will try to spend as much money as they possibly can to ensure that they get a similar amount for the next budget.

This approach assumes that everything stays the same as last year with minimum changes. Thus, it fails to take into account the changing circumstances

Managers when using this approach factor little revenue growth but more expenses. They do this to ensure they always get favorable variances.

No review of the budget

When a similar budget is carried forward next year, those who review the budget have little incentive to carry a comprehensive check. This leads to inefficiencies rolled into the new budget as well.

If the previous budget allocates a certain sum to a specific business unit. Then, the new budget will also allot funds to the same unit even if the unit doesn’t need it, or needs a lesser amount.

As the budget allocates funds in a similar way year after year, it often gets difficult to get funds for the new activities. This leads to a conservative business environment that kills innovation and risk-taking.

Based on unreal assumptions

This budgeting method assumes that there is no need to analyze the objectives and activities of the department. Also, it assumes no significant change in policy and financing approach as well.

Overall, it can be said that though incremental budgeting is easy to implement, it has the potential to destroy the business in the long-term. To avoid such a fate, a business must carry a thorough analysis of its income, expenses (both current and future), and make the budget accordingly.

Last updated on : February 6th, 2019
What’s your view on this? Share it in comments below.