A haircut in the financial world is not pleasant rather painful. It is basically the difference between the market value of the asset used as collateral and the loan amount. For instance, you used a piece of land with a market value of $50,000 as collateral, but the bank gave you a loan of $40,000 on this. In this case, the difference of $10,000 (or 20%) is the haircut.

The amount of haircut largely depends on the lender’s perception of the risk related to the fall in the value of the asset.  A general rule of thumb is lower the haircut the safer is the loan and vice versa. Also, a lower haircut allows for more leverage. The reduction (or the haircut) is expressed in the form of a percentage.

A haircut in finance is not only related to the loan. But, it is the reduction applied to the market value of the asset for calculating the margin, capital requirement, and collateral level.

Why are Haircuts Used?

For instance, a house could be worth $400 million now. But, there is no surety that by the time the house is sold, its value will remain intact. The house could get damaged in a storm, or new government policy could impact the value of the house. Therefore, lenders may go for about 40% haircut in such a case. 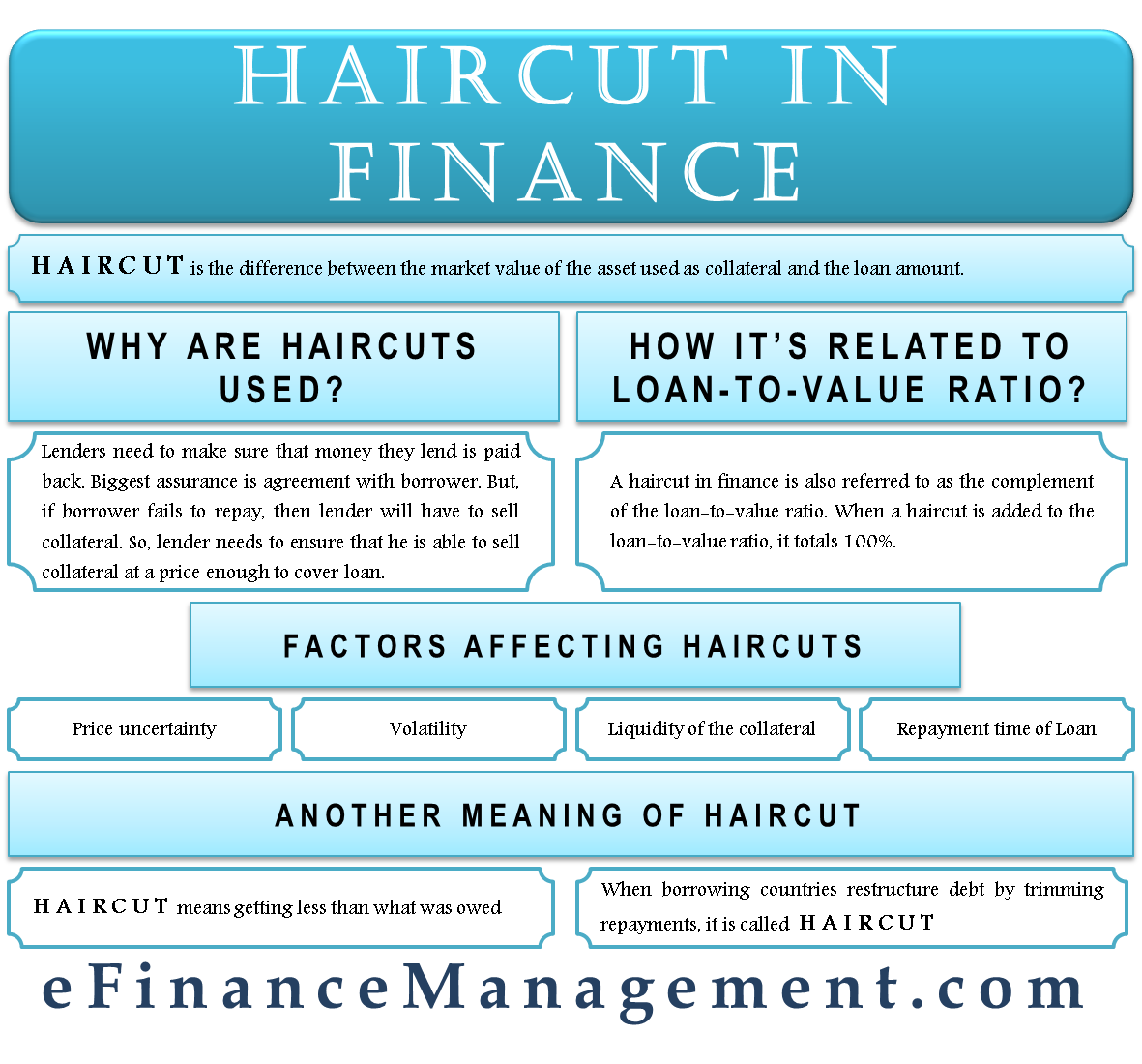 How are Haircuts Related to Loan-To-Value ratio?

A haircut is based on the level of risk associated with the loan. These risks include factors that may lead to a drop in the value of the collateral and also the default risk of the borrower. Some of the variables affecting the amount of haircut are discussed below;

Lenders need to take into account the risk they would face if they fail to sell the collateral for sufficient money after the borrower defaults. Fewer associated risks and greater accuracy in price predictability lead to less haircut. For instance, if a lender is confident about recovering the full loan on selling the collateral, then the haircut will be less.

For example, Treasury bills are commonly used as collateral for overnight borrowing between government securities dealers. Haircuts, in such cases, are negligible or very low due to the confidence in the value and credit quality of the collateral.

Vice versa, the securities that are known to suffer from high volatility and price uncertainty are subjected to higher haircuts. For instance, keeping equity as collateral may lead to a 50% haircut to lack of price predictability. A 50% haircut is common for margin accounts, but it can be increased to a higher level if the security is more volatile and pose higher liquidity risk. For instance, a haircut on leveraged exchange-traded funds, which are considered highly volatile, can rise up to 90%.

Further, the haircut also depends on how liquid the collateral is. If the collateral is highly liquid, then it is easy to sell it quickly. So, a smaller haircut is applied in this case. For assets that are harder to sell at fair market value attract a higher haircut.

Another Meaning of Haircut

Also, the term haircut is used when borrowing countries restructure debt by trimming repayments. Countries could enter into agreements to pay the loan with 20% haircut. In certain situations, lenders could prefer partial repayment than the prospect of not being paid at all.

Last updated on : October 31st, 2018
What’s your view on this? Share it in comments below.
Pin It Tweet