Business managers often face scenarios when they have to choose between projects. Such business decisions are very crucial as resources are limited. Thus, managers need to choose the best project that could maximize their return on the investment. One capital management or capital budgeting method that managers often refer to when facing such dilemmas is the Payback Method. There are various advantages and disadvantages of payback period which we will discuss and critically evaluate the technique.

What is Payback Period?

Payback method helps in revealing the payback period of an investment.  Payback period (PBP) is the time (number of years) it takes for the cash flows of incomes from a particular project to cover the initial investment. When a CFO faces a choice, he will prefer the project with the shortest payback period.

For instance, if the total cost of two projects – A and B – is $12,000 each. But, the cash flows of income of both the projects generate each year are $3,000 and $4000, respectively. The payback period for the project A is four years, while for project B is three years. In this case, project B has the shortest payback period.

Simple to Use and Easy to Understand

This is among the most significant advantages of the payback period. The method needs very few inputs and is relatively easier to calculate than other capital budgeting methods. All that you need to calculate the payback period is the project’s initial cost and annual cash flows. Though other methods also use the same inputs, they need more assumptions as well. For instance, the cost of capital, which other methods use, requires managers to make several assumptions.

Useful in Case of Uncertainty

The payback method is very useful in the industries that are uncertain or witness rapid technological changes. Such uncertainty makes it difficult to project the future annual cash inflows. Thus, using and undertaking projects with short PBP helps in reducing the chances of a loss through obsolescence. 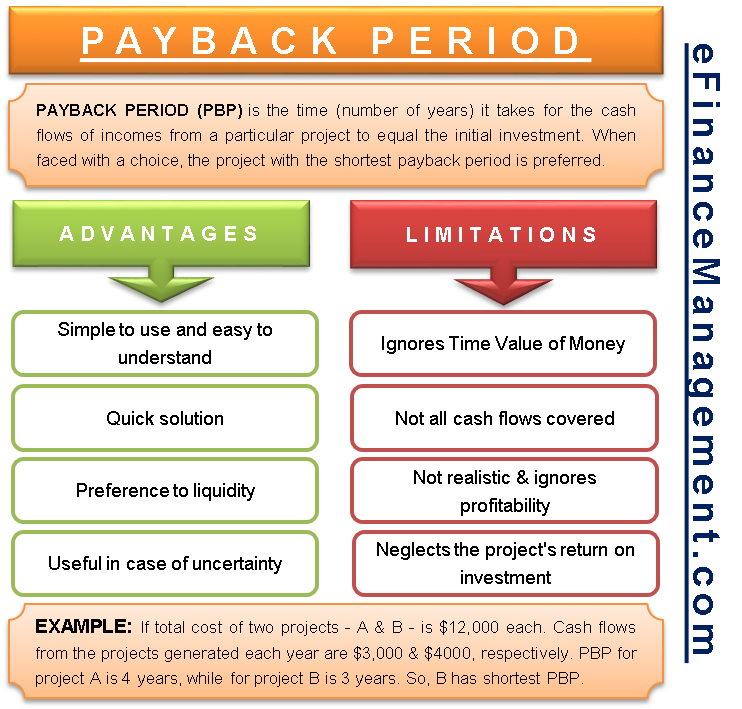 This is among the major disadvantages of the payback period that it ignores the time value of money which is a very important business concept. As per the concept of the time value of money, the money received sooner is worth more than the one coming later because of its potential to earn an additional return if it is reinvested. The PBP method doesn’t consider such a thing, thus distorting the true value of the cash flows. Here, there is a workaround. One can use the Discounted Payback Period that can do away with this disadvantage.

Not All Cash Flows Covered

The payback method considers the cash flows only till the time the initial investment is recovered. It fails to consider the cash flows that come in subsequent years. Such a limited view of the cash flows might force you to overlook a project that could generate lucrative cash flows in their later years.

The payback method is so simple that it does not consider normal business scenarios. Usually, capital investments are not just one-time investments. Rather such projects need further investments in the following years as well. Also, projects usually have irregular cash inflows.

Despite the disadvantages, the payback method is still used widely by the businesses. The method works well when evaluating small projects and the projects that have reasonably consistent cash flows. Also, it is a go-to tool for small businesses, for whom liquidity is more important than profitability.

Even big enterprises use this method. But, due to its limitation in giving a complete analysis, the businesses often use the payback method as a preliminary screening tool to scrap the projects that do not meet their payback criteria, and then, use more detailed analysis or other capital budgeting methods such net present value (NPV) analysis or the internal rate of return (IRR) on the remaining projects.1–5