We have already discussed the importance of capital budgeting. It is a process that helps in planning the investment projects of an organization in long run. Let’s understand all the following capital budgeting techniques with an example.

Now let’s find out the answer by using different techniques. 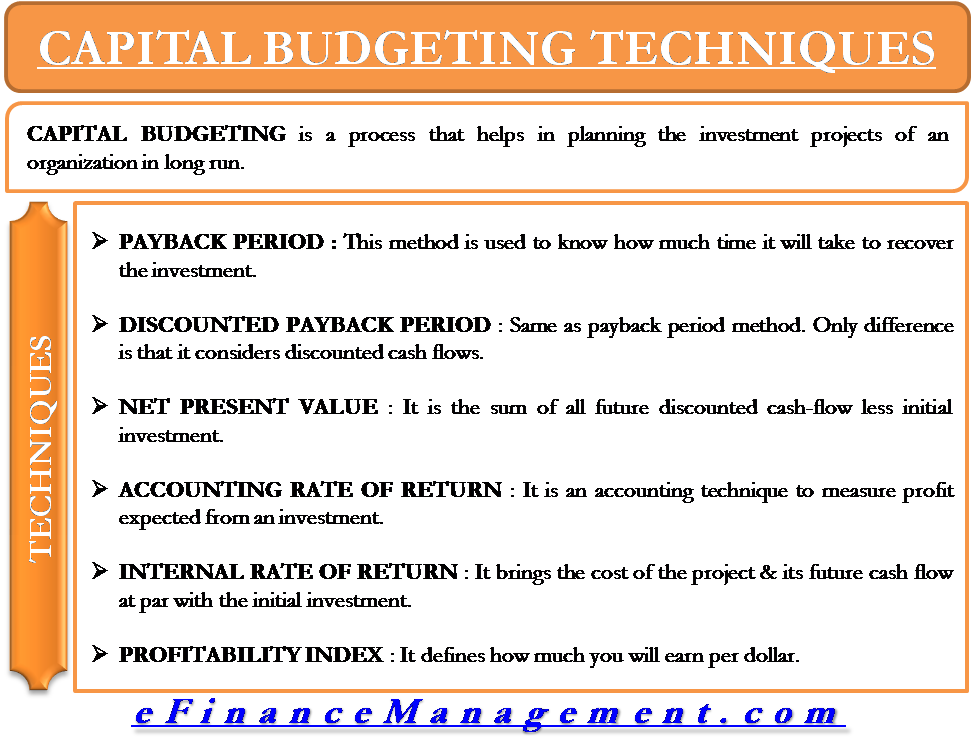 Payback method is used to know how much time it will take to recover the investment.

Here we can see it take 3 years to generate sufficient profit to recover the cost. So the payback period is 3 years.

NPV is one of the most commonly used methods for investment appraisal techniques. It is the sum of all future discounted cash-flow less initial investment. If the amount is positive then the project should be accepted otherwise it should be rejected.

In discounting payback period we can see the sum of all future discounted cash-flow is $ 10.4315 million & initial investment is $ 10 million. It means NPV is $ 0.4315 million. It is positive, hence the project should be accepted.

Accounting rate of return is also known as return on investment or return on capital. It is an accounting technique to measure profit expected from an investment.

The formula of ARR is as follows:

Internal Rate of Return is the discounting rate used for investment appraisal, which brings the cost of the project & its future cash flow at par with the initial investment. It is obtained by trial & error method. We already have discounted value at 10% discounting rate.

Profitability index defines how much you will earn per dollar. The present value of future cash-flow is $ 10.4315 million & investment is $ 10 million.

Profitability Index is 1.04315 which means every one dollar invested is generating revenue of $ 1.04315.If the PI is more than 1 then the project should be accepted otherwise rejected.1

Last updated on : March 8th, 2019
What’s your view on this? Share it in comments below.