So generally, an account wherefrom all significant transactions take place is the concentration account. And, the bank handling that account is called the concentration bank. This arrangement allows the company to focus on handling only one account. It is the account from where it does all significant transactions. In other words, such an arrangement relieves the company from the task of managing several bank accounts.

How does it work?

Assume Company XYZ has ten stores/branches in different regions in the U.S. Initially, every branch/store was responsible for managing its finances. However, such a practice started creating accounting issues. Moreover, it made auditing a time consuming and a costly affair.

To overcome such issues, Company XYZ took up concentration banking. Now, stores/branches transfer the entire collection or a part of their collection into the concentration account. The company can now decide to utilize these funds to its maximum advantage, including investment to get optimum returns. 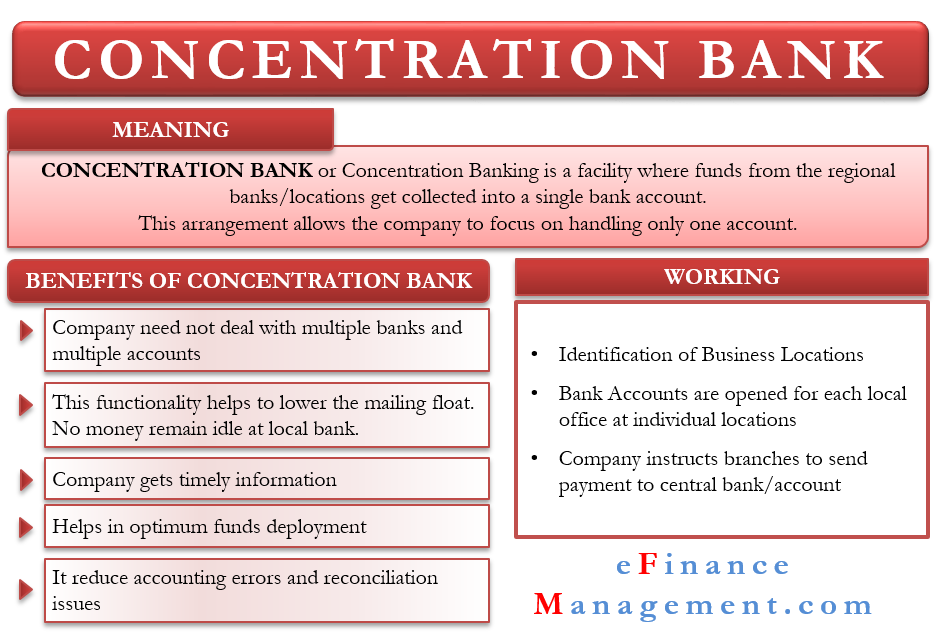 A company requires concentration banking arrangement if it has a large number of stores and offices across different locations.

In the absence of such a facility, the local managers need to take account-related decisions, such as investing idle cash. But, small funds in each account may limit the available options for investment at the local level. And so mostly the funds will remain idle in these accounts, which are spread over multiple locations.

On the other hand, if a company uses such a banking arrangement, the person monitoring the central account would have all the funds at his control. That will ease investment decisions to optimize returns. Moreover, the company can think of hiring an investment manager to invest the funds.

Following are the benefits of such a banking arrangement:

Concentration bank or banking could prove beneficial to a company with multiple stores or offices in different locations. However, for smaller firms with relatively fewer transactions, such a service may not be of much use. For smaller quantum of funds the cost of transfer etc. sometime may not justify the arrangement.1,2