The Celler-Kefauver Act is an anti-merger act that seeks to block the mergers and acquisitions, reducing the competition in the market. Specifically, it was introduced to plug the loopholes and strengthen the Clayton Antitrust Act of 1914.

In both these cases, there could be a situation when the merger or acquisition acts as a barrier to entry or reduce competition. At the same time, it gives a cost advantage to the acquiring company. A point to note is that the Celler-Kefauver Act does not directly ban vertical and conglomerate mergers unless they lower the competition.

The U.S. economy was witnessing a heavy growth around the 1890s. This helped the companies – both new and old – to grow as well. To benefit from the booming economy, bigger firms undertook mergers and acquisitions of smaller firms. The public and investors did not like the companies amassing too much power and getting sort of monopoly power. As we all know the monopoly-like situation has its own disadvantages and vices.

Thus, there were demands for the government to intervene with regulations. The authorities then came up with the Sherman Antitrust Act of 1890. It was among the first regulations targeting mergers and acquisitions in the U.S. However, though it was one step ahead in controlling this menace; still, it had too many loopholes.

In 1914 the U.S. Congress made changes to the Sherman Antitrust Act of 1890 by introducing the Clayton Antitrust Act. This new act was an attempt to clarify the hazy wordings and plug the earlier act’s loopholes.

This new act primarily focused on price discrimination, monopoly, and the takeovers that lower the competition. However, this act also had some loopholes (discussed above). Thus, to plug these loopholes, the U.S Congress came up with another Act, the Celler-Kefauver Act.

Celler-Kefauver Act – How it helps?

As said above, this act was introduced to plug the loopholes of the Clayton Antitrust Act specifically. The Clayton Antitrust Act was able to make laws and stop horizontal mergers and consequent menace.  However, it did not have any provision, or it completely ignored the issues of vertical mergers. It gave importance only to the horizontal mergers in which firms in the same sector or making the same product go for acquisition or merger. This loophole encouraged businesses to go for vertical mergers to get a monopoly-like power in terms of cost and control of resources.

Such thinking, however, was against the free market as it reduces competition. Thus, the U.S Congress came up with the Celler-Kefauver Act to plug the loophole by expanding the Clayton AntitrAct’s scope Act to include vertical and conglomerate merger. 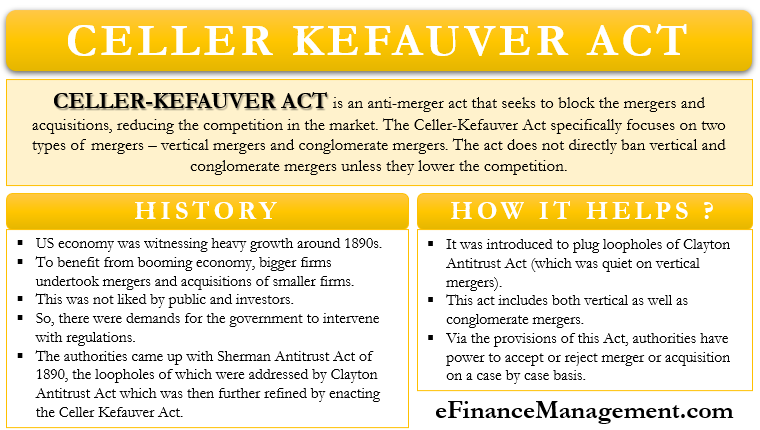 This new act made it mandatory for the public companies to inform the DOJ (Department of Justice) and FTC (Federal Trade Commission) when going for vertical merger or acquisition. The authorities will have the power to accept or reject the merger or acquisition on a case by case basis.

Also, the earlier antitrust laws had legislations in place for certain types of mergers and acquisitions. Also, they prevented mergers and acquisitions by limiting the sale and purchase of shares. The companies circumvent these rules by purchasing the assets of another firm. The Celler-Kefauver Act took care of this as well by plugging this loophole.

In a vertical merger, a company tries to grow vertically by merging or acquiring the vendor company. Such a merger gives the acquiring company more control over the supply chain. These mergers, however, may prove an entry barrier to new firms and reduce competition as well.

For instance, if Company A, a mobile maker, acquires Company B, a major display maker, then it could make it hard for other mobile makers to get displays. In this way, Company A would a get cost advantage, as well as drive the competitors out.

In the conglomerate merger, two different entities that either operate in different segments or geography come together. Such a merger allows companies to expand the market or the product range.

The Celler-Kefauver Act notes that the two firms use resources from two other markets to form a monopoly in another market in case of a conglomerate merger. This form becomes an entry barrier for smaller companies firms and is unfair to the consumers. Because the consumers’ option and right to buying alternate products get substantially affected.