A Bear Market is a phase when the stock prices are falling. Usually, when the price of securities falls 20% or more from the recent highs or in a two-month timeframe, the market is said to be in the bear phase. This phase is primarily due to negative investor sentiment and widespread pessimism among the investors about the economy and politics.

Usually, the bear market relates to the entire market or the index, such as NASDAQ. However, one can also call individual securities to be in a bear market if they witness a drop of more than 20% over a two-month timeframe.

The term bear market takes its cue on how a bear attacks its enemy. A bear, generally, pushes its paws in a downward motion to attack its enemy. Falling stock prices see this dropping motion in the bear markets.

There could be several reasons leading to a bear phase. The most convincing is a weak or slowing or sluggish economy. Some of the signs of a slowing economy are low employment, less economic activity, low investor confidence.

Another reason that can result in a bear phase is unfavorable government intervention in the economy. For instance, if the government announces any change in the tax rate or the interest rate.

Investors’ expectations can also result in a bear phase. For instance, if most investors expect the market to drop going ahead, they would start selling their shares.

Geo-political issues and trade wars could also be the reason for the bear market.

In a bear phase, investors’ confidence is low, or it starts to drop with the drop in the security prices. Since investors grow pessimistic about the overall market conditions, they begin to sell their investment. They do so to save themselves from further losses as they anticipate the prices to drop further.

If more and more investors exhibit the same behavior, it turns into a widespread panic, resulting in a further drop in the prices. During such a market, the trading activity drops along with the dividend yields.

During the bear phase, some investors try to benefit from the market by buying the stocks at such low prices. They reinvest in the market. And, as more investors follow the same behavior, it again ups the market confidence. Now, with more demand, the stock prices start to move up, eventually leading to a bull market. 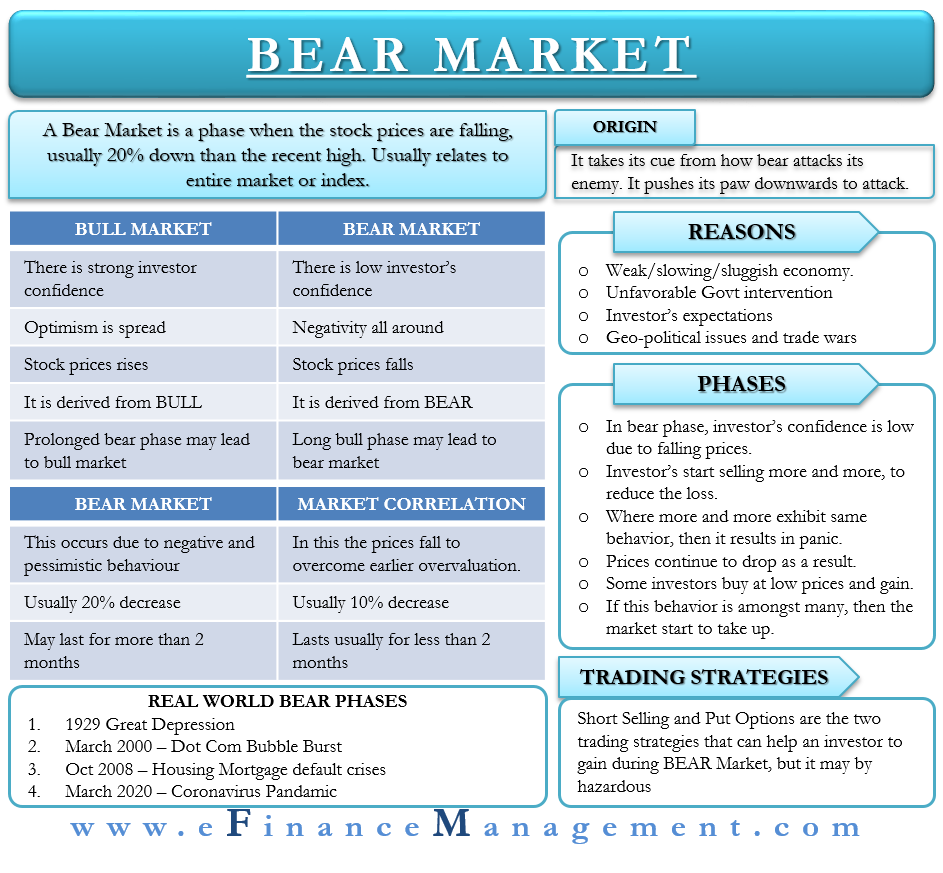 How Is It Different from Bull Market?

A bull market is the exact opposite of the bear market. Following are the differences between the two:

How Is It Different From Market Correction?

During both a bear phase and the market correction, the stock prices drop. However, both terms are very different from each other.

A market correction takes place when the prices rose more than they should have. Or, we can say when there is an overvaluation. In such a case, the market corrects itself with the fall in prices.

Another significant difference between the two is the level to which the prices fall under both phases. A bear phase is usually when the stock prices fall by 20% or more. On the other hand, prices fall by about 10% during a market correction.

Also, market correction usually lasts for less than two months. Bear phase, on the other hand, may last for two months to two years or more.

There have been 123 instances of market corrections and 32 bear phases during the period between 1900 and 2013.

One of the best trading strategies in the bear phase is short selling. Under this, an investor borrows shares and sells it, and later repurchases them at a lower price. However, this strategy is hazardous and could result in huge losses if the prices don’t move as per investors’ expectations.

Another strategy is buying a Put option. This option gives investor freedom, but not the obligation to sell a security at a specific price and a certain date. So, an investor can use it to bet on the stock prices to drop. Such an option also allows investors to hedge their portfolios.

Similarly, there are inverse ETFs. These ETFs move in the opposite direction of the index they follow. For instance, if an inverse ETF tracks NYSE, which goes down by 2%, it (ETF) would increase by 2%.

What To Do In a Bear Phase?

An experienced investor or trader can use the above (and more) strategies to make a profit in a bear phase. But, investors who are new or inexperienced or those who are not able to give time to their portfolio must not use these trading strategies. Such investors must take the help of a financial adviser.

The worst thing to do in a bear phase is panic selling. Every experienced investor will give you the same advice. Though it is impossible to determine the direction in which the market will move in the short-term, you can still make the best of the current situation.

So to ensure you get the maximum from this phase, you may take the help of an adviser. The financial adviser will help ensure if your current asset allocation is in-line with your long-term objectives. During the bear phase, you may also need to rebalance your portfolio among different assets, such as stocks, bonds, and more.