Home
Financial Management
Black Swan Event – What It Is, Examples And More

A Black Swan event in the finance world refers to an extremely negative rare event, which is impossible to predict. Such events are random and have wide-spread ramifications. The term is inspired by the possibility of seeing a black swan among a group of white swans.

The term highlights the risk of making general conclusions with limited data. For instance, if a man sees thousands of swans and all white, he may logically conclude that there are only white swans. However, his conclusion is though logically false. Just because, he never saw a black swan, it does not mean that such creatures do not exist.

Black Swan originates from the Western belief that there are only white swans. However, the belief changed after the Dutch explorer – Willem de Vlamingh, discovered black swans in Australia. The discovery was an important event in the zoology.

Nassim Nicholas Taleb – a finance professor and former Wall Street trader, was the first to use this term in 2007. The term, however, became popular after the 2008 financial crisis. Since such events have catastrophic ramifications; Taleb argues that people must always assume the possibility of such an event and plan accordingly. Using the 2008 financial crisis as an example, he also noted that a broken system if allowed to fail, strengthens against the future black swan events. 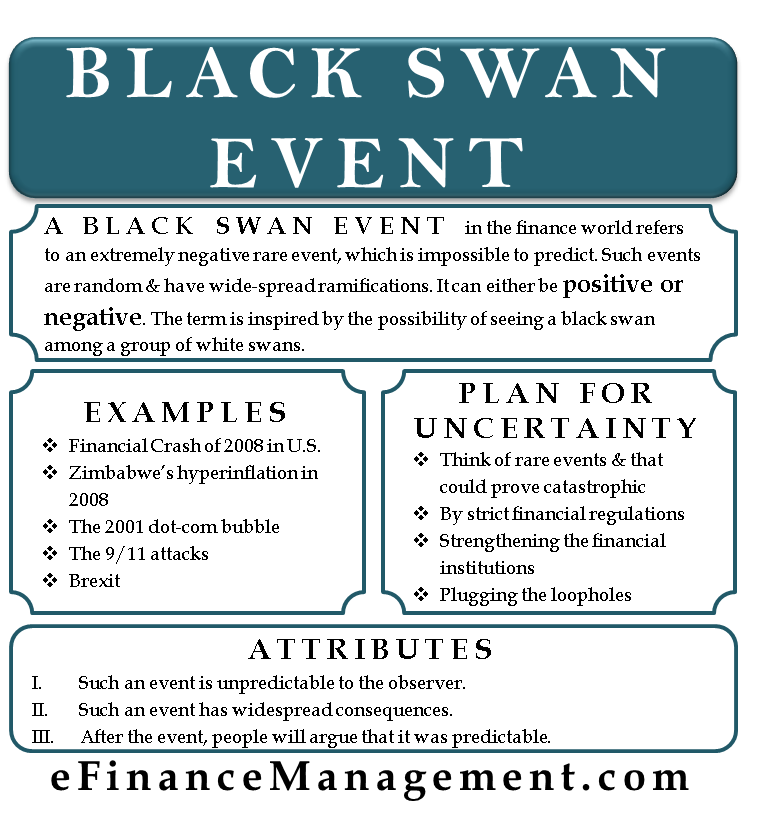 According to Taleb, there are defining attributes of such events:

The 2001 dot-com bubble was also a black swan event and was very similar to the 2008 crash. Since the Internet was relatively new at the time, it attracted massive investments. Later, these Internet companies started going out of business due to a weak business model, resulting in a major crash in the market.

The 9/11 attacks were also black swan events. In the week following the 9/11, the stock markets lost $1.4 trillion in value.

Though the 2008 crash is the last major black swan event, many say the Brexit is also a similar scale event. The news, in June 2016, of the British referendum to exit the European Union (EU) was a surprise to many. As a result, the British pound came down to its 31-year low against the dollar along with wiping almost $2 trillion from the global markets.

Both Positive and Negative

Even though the black swan events have a negative connotation, the idea does not only refer to negative events. A black swan whether positive or negative depends on the perception of the individual affected. For instance, a sudden crash in the stock market is negative for most investors except for those with aggressive short positions.

How to Plan for the Unpredictable?

Even though such events are random, a country (or even an investor or small businesses) must prepare for such events. One can start by thinking of rare events that could prove catastrophic for a business. Business owners must take preventive measures to minimize the damage from such events. For instance, a business can go for fire insurance to protect it from any unforeseen destruction due to fire.

A stock market investor can minimize the losses in case of a black swan event by hedging his risk appropriately. Similarly, a country can avoid such events by coming up with strict financial regulations, strengthening the financial institutions and plugging the loopholes that may invite such catastrophic events.

Last updated on : November 27th, 2018
What’s your view on this? Share it in comments below.
Pin It Tweet