What is a Merger Model?

A merger model is primarily used by investment bankers and M&A professionals. A detailed analysis of the prospective combination of two companies is carried out. The goal is to ascertain whether or not there exist benefits to an amalgamation.

A merger model is an information intensive tool. It is based on several assumptions and tailored to incorporate the specific characteristics of the subject companies to provide as realistic results as possible. A merger model can be considered as a feasibility study that is carried out beforehand to ensure the success of amalgamations. Corporations hire investment professionals and valuation specialists to determine the consequent value of the resultant merged entity. It would be only on the green signal of the investment bankers that the corporations would consider further action viable. 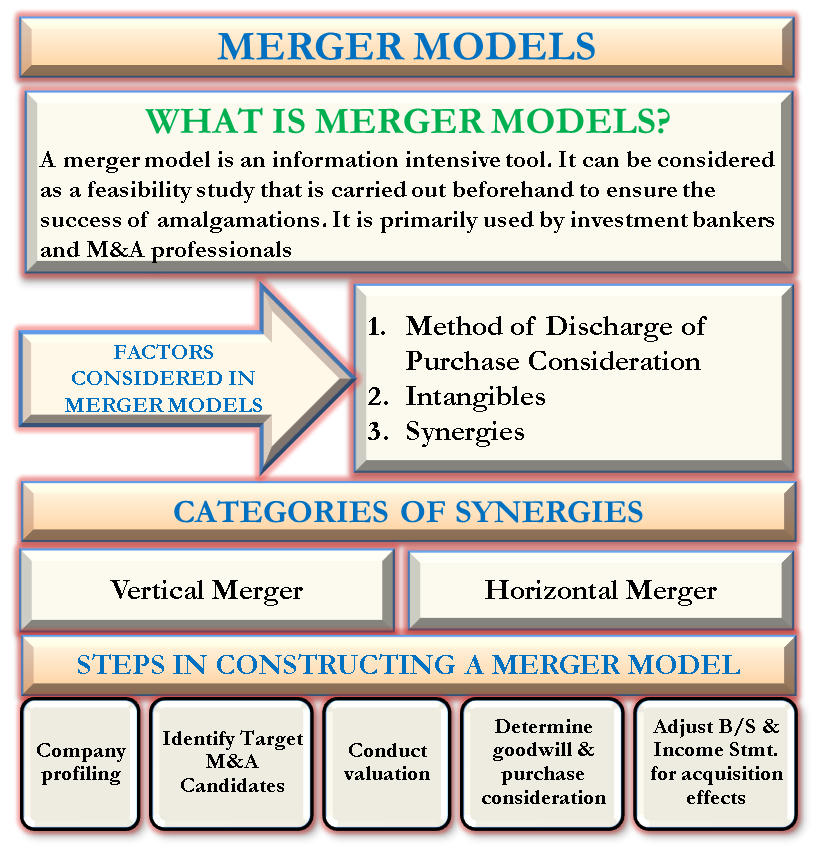 Method of Discharge of Purchase Consideration

The fundamental sources of funding an acquisition are shares, debt, and cash. The foremost consideration that the acquiring companies have in mind while issuing a consideration is whether it would lead to accretion (increase in EPS) or dilution (decrease in EPS). It also must ensure that in the process, the company does not take on more debt than it can sustain. The company must also be conscious of not giving away such amounts of cash to jeopardize its liquidity. An ideal discharge combination would be any mix of cash, debt, and stocks that satisfy the long-term goals of the company.

The following example shall provide a better understanding
Co. A (acquiring company) is in the process of taking over Co. B (target company).

The board of Co. A resolves to discharge the PC in the following manner:

Based on this the purchased consideration would look something like this:

As seen in the above example, the purchase consideration discharged exactly matches the worth of the company. However, in many cases that may not be the case. In practice, the consideration may be more or less than its fair value. This may be for several reasons. The acquiring companies may be fine with paying a premium for firms with high synergy benefits or with valuable assets on its books. Conversely, a sick unit or a firm undergoing turmoil may be sold off at much below its fair value. Such scenarios give rise to intangibles on the balance sheet.

The below-mentioned key must be remembered:

The following example will clarify the idea.

Go through the following balance sheet of Co. X

One of the biggest motivations to initiate a merger are synergies of scale that arise only due to strategic amalgamations. Synergies refer to the abnormal benefit that would accrue to a company by virtue of which it is positioned significantly ahead of its competitors. The revenues earned by the merged entity shall be greater than the combined revenue of each of the single entities had the merger not taken place. Such is the impact of an effective and well thought out merger. There are two broad categories of mergers that lead to synergies:

Occurs when a player acquires another player in the same channel but placed at a different point. For example, a merger with a manufacturer, distribution channel or consumer of a product is a vertical merger. This kind of a merger model brings about cost efficiency, prevents redundancy of operations and aids in making a company self-sufficient.

Refers to a competitive merger strategy where firms at the same level but in different industries shake hands. The fundamental rationale behind a horizontal merger is to pool resources with your competition or contemporary to eliminate peer to peer competition. A fast-food company incorporating with a desserts chain is an example of the same.

The following merger model based on synergies will further clarify the concept:

It is a situation of vertical merger and combining the two firms will create economies of scale in the form of effective integration of the supply chain. This will reduce the cost of goods sold from 70% to 65% of revenues. The tax rate applicable is 40%.

Let us have a look at how synergies cause a difference in valuation before and after the merger.

After Merger
After merger, the COGS reduce to 65% of revenue.

Steps in Constructing a Merger Model

Literally speaking, the steps involved in a merger model are vast and elaborate. Initiating and concluding an amalgamation of two giant corporations is a mammoth task and entails a multitude of minute steps. There lies no margin for error and therefore the IB professionals must carefully scan each parameter. Through this write-up, an effort is made to narrow down the complex procedure and briefly discuss the basic steps involved.

Growth opportunities available in the market must be scanned. The acquiring company must determine the dimension in which it wants to expand- horizontally, vertically or laterally. It must also set objective in terms of partnership it seeks via the merger- strategic, financial or cost-effectiveness.

Out of the vast universe of potential takeover available, the company must boil down to the best few. Based on the objective statement drafted in the above step it must determine the firms that best align with it. It must also inquire whether such companies are open to a sale.

Carry out a valuation study that may be based on variables such as forecasted cash flows, customer base, synergy benefits, patent monopoly, PE multiples etc. There is no prescribed criteria to value a company. However, buyouts normally do not take place unless the seller offers a premium over the existing value of the target. In the absence of the same, there is absolutely no incentive to sell.

Once the preliminary surveying is done and valuations have been determined a buyout price is offered to the target. The seller must tailor an optimum mix of common stocks and cash for the shareholders of the target. Moreover, an important consideration for the seller is also to ensure that only such number of stocks are issued which do not dilute its prevailing EPS.

This is a simple procedure and requires a line by line addition of various items in books of an acquirer. If the assets and liabilities of the target company are revalued they are required to be recorded at such revalued figures. Along the way, adjustments are also made for goodwill or reserves that arise during such a merger. Additionally, deferred tax assets (liabilities) as the case may be, are offset against one another to offer a consolidated picture.1,2

Last updated on : December 31st, 2018
What’s your view on this? Share it in comments below.