Explicit costs are paid in the form of wages, rest, material, salary, electricity bills, and other overhead miscellaneous expenses. To know more about material, labor and expenses click here.

Explicit costs are easy to recognize and keep track off. They are recorded when they arise and are calculated in terms of cash. Keeping a record of explicit cost proves to be very important as it helps in purposes of calculation of profits, cost controlling, decision making, etc.

Implicit cost is also known as economic cost and do not require an outflow of cash from the business. Implicit cost it the value of sacrifice made by the company at the time of conducting some other action. The cost arises when the asset is utilized as a factor of production instead of renting it out.

Implicit cost cannot be easily measured as they are not incurred in monetary terms. Only an estimate for these can be prepared. These costs are not reported or recorded in the books of accounts. Implicit cost is determined as they assist in the decision-making process regarding replacement of any asset. These costs impact the performance and profitability of the company. Examples of implicit costs are the salary of proprietor and interest on owner’s capital.

After gaining insight on both, explicit and implicit costs, let’s have a look at the difference between them. 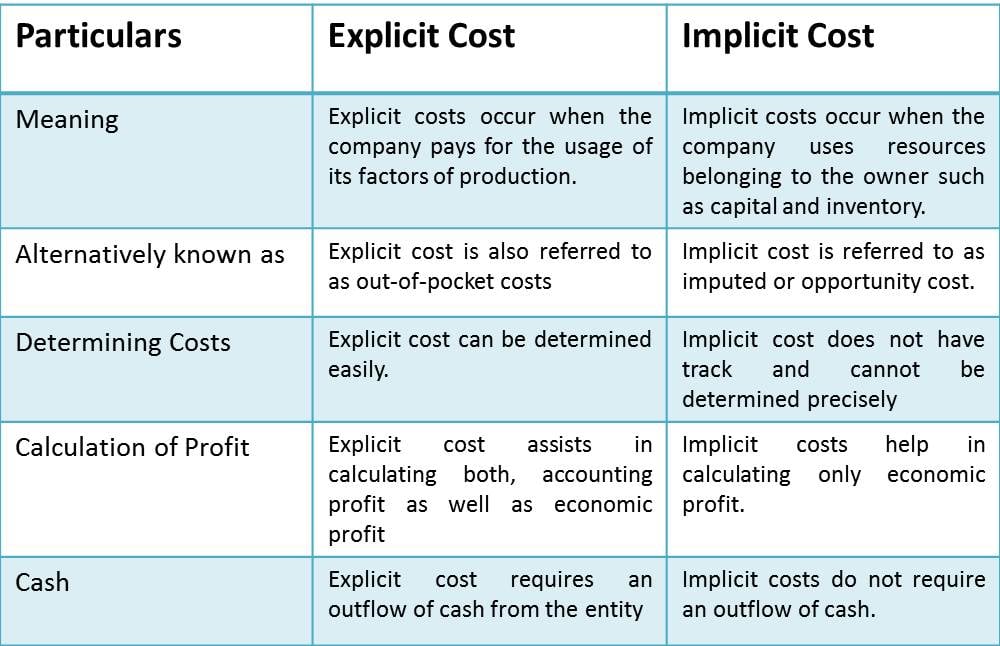 The following are the differences between explicit cost and implicit cost:

Implicit and explicit costs relate to a firm’s opportunity, costs, and cash expenditures. A business may incur explicit costs from a variety of sources. As opposed to implicit costs which are difficult to quantify. However, the company endures both the cost and conducts decisions keeping both the costs in consideration.

To know more about the different types of costs, click here.1–3