Negative working capital (NeWC) is the surplus of current liabilities over the current assets. It is regarded as bad if it disturbs the business operating cycle of a company more or less consistently. It may be considered good if a company has NeWC without disturbing the operating cycle consistently. Such companies may include Walmart, Amazon, etc., which buys on credit and sells in cash and the inventory turnover is also fast, almost instantaneous. Let us see about the disadvantages of negative working capital.

Here, we will not talk about the exceptions and will discuss the disadvantages of negative working capital in the normal course of business.

Companies with negative working capital are using the money of creditors to finance current assets and a part of fixed assets. Buying fixed assets with this money can pose some financial trouble anytime.

When the payment of accounts payable is due, the company may fall short of cash. And it will be challenging to sell the fixed assets where the money from current liabilities is stuck. This will lead to bankruptcy risk for the company. 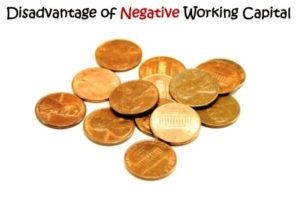 Business with NeWC is struggling to make payments to the creditors and cannot collect money or sell the lying stock. The credit rating of such companies is bound to go down—lower rating results in higher interest rates charged by the banks.

Investors and Bankers don’t find it worth Investing

Normally, if a company has NeWC, it is understood that the accounts payables are not paid on time, which will vanish the trade discount, which is only allowed if paid within a certain period.

Not only does a company having NeWC lose on trade discounts, but it also loses its financial reputation in the market.

Non-paying and late paying both are crimes for supplier relationships. A bad financial reputation is a slow poison, and it reaches a point when all suppliers in the market stop releasing credit to the company. How will the company do business without suppliers supplying raw materials or goods?

Winding Up Petition by Creditors

When the creditor’s concern changes from late payment to probably no payment, there are good chances that they may file a petition for winding up of the company for the sake of their hard-earned money.