What is Chapter 7 Bankruptcy?

Bankruptcy under Chapter 7 is like Liquidation Bankruptcy. Filing bankruptcy under this is most suitable when there is a lag in paying bills, and there are no other means to honor the monthly commitments and expenses. It is the last remedy to help you reshape your finances. In the process, you may have to liquidate some of your assets and further affecting your creditworthiness.

Upon filing under this Chapter, the Court grants a temporary stay on current debts. It stops creditors from recovering their dues, foreclosing on your home, etc. Then, the Court appoints a bankruptcy trustee who takes charge of the assets and, most importantly, liquidates the “non-exempt” assets to settle the overdue creditors. The trustee’s job is to review the asset-liability position and meanwhile also arrange for the creditor’s meeting. He further categorizes the debts into different classes based on their priorities and arranges for their payments.

Prerequisites for Filing under this Chapter

Before filing under this Chapter, the debtor needs to comply with specific conditions:

Steps for Filing under Chapter 7

The applicant must first undergo credit counseling from an approved agency within 180 days before filling. If no approved agencies exist in the state, this step can be avoided. Grant of other relaxations happens on a case-to-case basis. The applicant must complete the filing of several forms entailing details like personal information, debtor’s finances, creditors, properties, incomes, and expenses. A petition also has to be filed in the Court, based on which grant of an automatic stay takes place that prevents the creditors from collecting the debts.

Appointment of Trustee and Creditor’s meeting

The Court engages a Trustee who takes the hoard of all the assets and categorizes those that can be liquidated to settle the creditors. Post this, the creditors’ meetings happen to confirm the validity of the petition and the claims. It further allows them to meet the debtor as well as the trustee and ask questions.

Classification of Assets and Repayment of Debt

The assets of the debtor are classified under the Exempt and Non-Exempt categories by the trustee. It is required to sustain the basic standard of living of the debtor. The exemptions vary from state to state, and in many cases, they are allowed to continue ownership of their primary homes, car, and personal belongings. The Non Exempt assets are seized, liquidated, and settled against the creditors.

Most of the obligations get their due under this process, which releases the debtor from personal liability. Post this, the creditor may no longer avail of future recourse. There are certain debts as per the US Bankruptcy Code that cannot be discharged under this Chapter.  The list, as per the Code, consists of 19 categories. Some of them are Alimony, Child Support, Income tax, federal student loans, etc., which are not allowed to be released during the process of bankruptcy.

The below table gives a glimpse of the debts that can be discharged under this Chapter along with their discharge rates:

Recent studies indicate up to 99% of discharges in credit cards and medical bills. Of the same, more than 90 % are fully discharged. Taxes and student loans follow it at 61 % and 15 %, respectively.

Also read Absolute Priority for learning more about the process or rule of settling debt.

Unlike Chapters 11 and 13 bankruptcy which usually take a long time to discharge the debts with low success rates, the turnaround time in Chapter 7 is much better and affordable too.  About 90 % of the applicants who filed for Chapter 7 had their debts settled in six months or less. About 85 % of them got further relief, such as no phone calls for recovery because the Court issues an automatic stay. 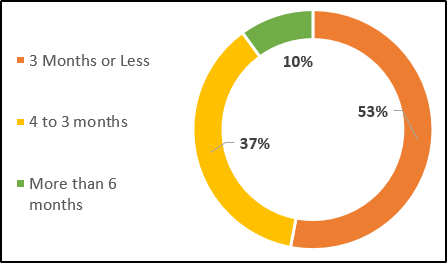 Although it is much simpler to file bankruptcy under this Chapter, It is equally important to know the pros and cons associated with it to decide the best options for your needs. The below table features some of them:

Continue reading about other What is Bankruptcy & its Types.