You may have heard that the ultimate goal of any organization is to maximize the wealth of the shareholders by generating greater amounts of profit. And aiming for a sustainable and consistent growth in profits is impossible without managing the costs efficiently. It is out of this predominant requisite that the Capital Structure and its study derive significance.

What is Capital Structure and Why is it Important?

Capital structure in the simplest terms refers to the proportion of debt and equity representing the total capital of the business which is required to fund the investments and day to day operational activities.

The need for deciding upon a suitable capital structure stems from the fact that it is typically less expensive to obtain debt financing when compared to equity. The businesses, therefore, must be careful to employ such proportion of debt, the cost of which does not outweigh the returns on its investment, consequently leaving a greater chunk of returns for the shareholders. Such an analysis, we call as ‘Capital Structure Analysis’.

Determining the best fit capital structure is equally relevant for small businesses as it is for huge corporations. The ideal capital structure strikes a balance between the risk and returns seeking to maximize the price of the stock while minimizing the cost of capital.

Moreover, it also influences the organizations’ risk profile, ability and to obtain funding and its cost, resilience to economic and industrial downturns, appeal to various stakeholders and their expected return on investment. 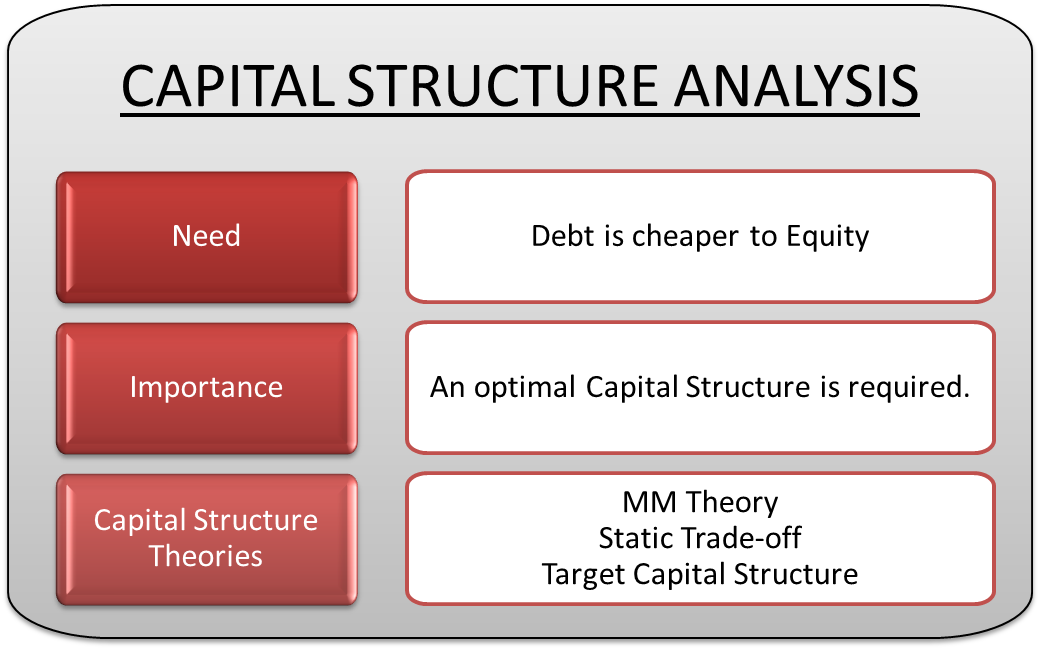 While this theory has been replaced by several modern theories, the study of capital structure analysis cannot be complete without understanding the MM approach. It explains the fundamental relationship between the capital structure and cost of equity introducing the impact of taxes and financial distress.

MM Proposition I (No Taxes): In the absence of taxes, the value of firm remains unaffected by capital structure since interest on the debt will not provide any tax shield. Therefore the firm is indifferent to debt and equity financing.

MM Proposition I (With Taxes): With the introduction of taxes, benefits of tax saving on interest will be maximum when the proportion of debt is maximized. As per this proposition, capital structure is optimal at 100 percent debt.

MM Proposition II (No taxes): Debt is typically cheaper than equity. However, increasing proportions of debt in the capital structure makes the firm prone to risk leading to a corresponding increase in the cost of equity. This increase offsets the benefits of lower cost debt in a manner such that the WACC remains constant.

MM Proposition II (With Taxes): This proposition also suggests that in a scenario where taxation exists, including 100% debt in the capital is the optimum structure due to tax shield on interest.

A significant distinction between the theories of proposition II is that in the no tax scenario, the WACC remains constant for various proportions of debt and equity due to the absence of tax benefit on interest. While in the latter, the WACC continues to decrease as the proportion of debt increases since the benefits of tax savings are efficiently harnessed.

As the name suggests, this theory seeks to trade off the cost of risks and exposures with the tax saving benefits of using debt. It contends that there exists an optimal proportion of debt for an optimum capital structure.

Unlike the MM propositions which emphasize on maximum debt to be idealistic, this theory quantifies the proportion of debt. Borrowing beyond this proportion would actually increase the WACC which is illustrated below:

The point at which:

In simple terms, the point beyond which increasing the proportion of debt adds to the financial distress of a firm thus making it riskier is the point of optimal debt. At this point, WACC minimizes.

The target capital structure is better defined as a flow concept rather than a stock concept. It is the structure that the organization uses over a period of time while making decisions about raising additional capital. There is no stringent number suggesting a target structure. However, it is generally a mix which offers value maximization while keeping the costs to the minimum.

In practice, the firm’s actual structure only hovers around the target structure. This is mainly for two reasons:

Stocks may be trading at higher prices tempting the firm to issue more stocks. Thus, leading to a higher proportion of equity.

The weight of stocks and bonds are determined by its market value. Since market value fluctuations constantly occur the firm’s actual structure will always float around the target.