Relevant and Irrelevant costs are the classification of cost based on their importance. Cost data is vital for a business as it helps in decision making regarding maximizing profit or meeting other business objectives. But, not all costs are essential to a company when making a particular decision. Thus, to improve decision making or to make better decisions, a business needs to understand the difference between relevant cost vs. irrelevant cost.

When a company faces two or more alternatives, the choice depends on the more profitable option. The profitability, in turn, hinges on the revenue and cost of each option. Some costs would vary for each option, while some costs are the same. Thus, we must classify costs as relevant and irrelevant to make a better decision.

Relevant costs, as the name suggests, are the cost that is affected by the decision that the company or manager takes. Or, we can say these costs change with each choice. On the other hand, managerial choices do not affect irrelevant costs. Since irrelevant costs remain unaffected by a decision, businesses often ignore these costs.

What does it include?

Irrelevant costs, on the other hand, include sunk costs and unavoidable costs or fixed costs. Sunk costs include the actual costs or the expenses that the company has already incurred.

Relevant costs are generally variable. Or, we can say they are operational or recurring expenditures. Irrelevant costs, on the other hand, are usually fixed in nature or relate to the capital or one-off spending.

Relevant costs usually relate to the short-term. Irrelevant costs are generally for the long-term as they are mostly capital or one-off expenditures. In the long-term, however, most costs are relevant. For instance, if a company is planning for ten years ahead, then it would consider all types of cost, including the fixed and sunk cost that it might incur. 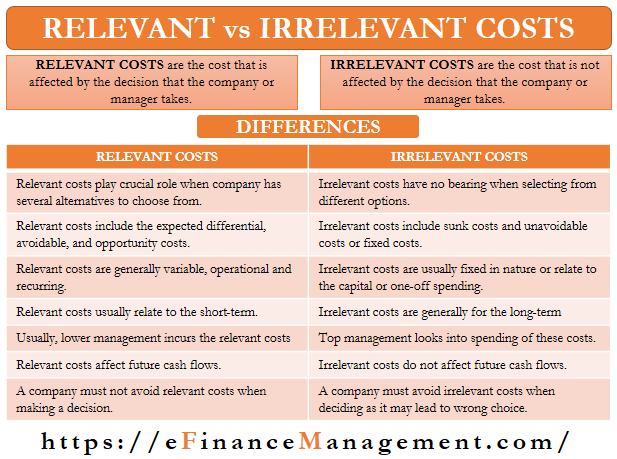 Company A is using a two-year-old machine costing $24,000. The company uses straight-line depreciation, while the machine has a useful life of 10 years.

Company A is considering buying another machine costing $45,000 with a useful life of 9 years. The new machine won’t have any effect on the number of units that a company produces. Company A, however, expects the variable cost to come down from $34,000 to $22,000. Fixed costs will also be the same at $20,000.

Thus, the depreciation on the new machine and variable cost saving is the only relevant cost. Based on these two costs, Company A will have a net saving of $7,500 ($12,000 Less $4,500) if it buys a new machine.