Cost Behaviour is the change in the behavior of a cost (or costs) due to a change in business activity. The study of this change is the cost behavior analysis. For example, the electricity cost will move up if a business extends the working hours.

Before analyzing the behavior of costs, a manager needs to understand the crucial business activities that may impact the costs. Usually, a manager can define activity levels in terms of dollars, units; miles were driven, and more. Moreover, the manager should try to determine the correlation between activity levels and costs. 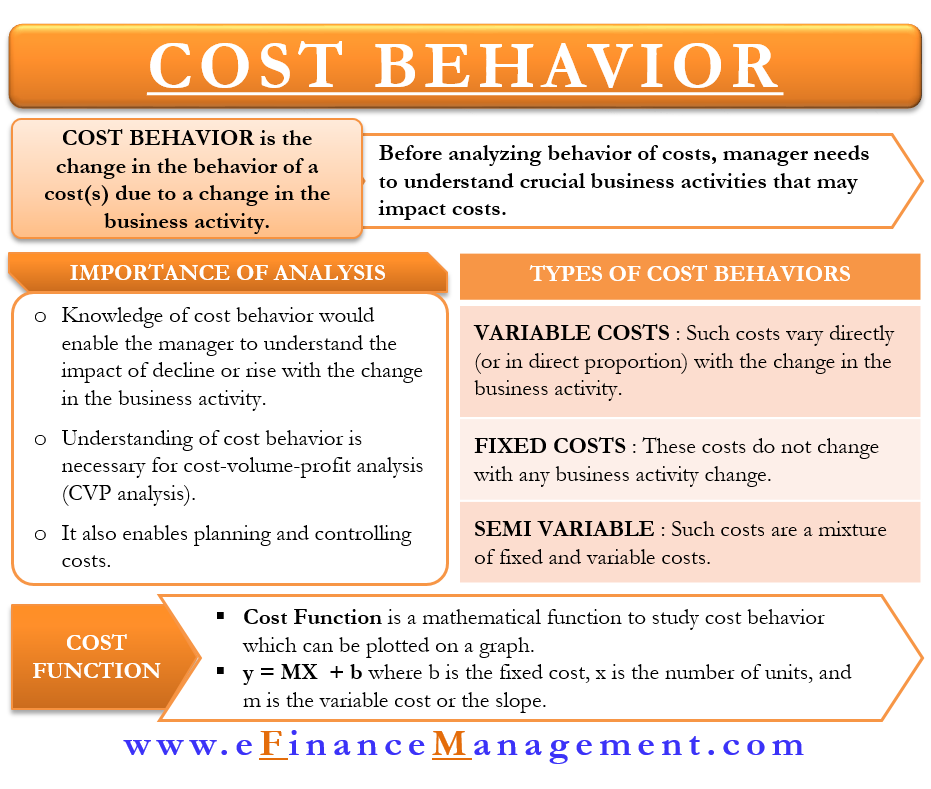 Types of Cost by Behavior

Primarily, there are three types of cost by behavior:

These costs do not change with any change in business activity. For example, a business will still need to pay rent even if it is generating zero sales. Depreciation is another example of a fixed cost.

Such costs are a mixture of fixed and variable costs, and thus, contain the elements of both. For example, an internet bill includes a fixed monthly charge plus a variable fee based on usage. Generally, these costs are not very useful to the company in its original form. So, accountants usually split them based on their fixed and variable components. To do so, they use cost behavior analysis techniques, such as Scatter Diagram, Regression Analysis, High-Low Method, and more.

As said in the first paragraph, companies use mathematical cost functions to study the behavior of costs, usually the Mixed price. A cost function is often in the form of a mathematical equation, such as y = MX + b. One can also plot it on a graph. In the equation, b is the fixed cost, x is the number of units, and m is the variable cost or the slope.

To effectively or simplify the use a cost function, one needs to consider the following assumptions:

One can use quantitative techniques to define a cost function, and in turn, analyze the cost behavior. The simplest technique is the high-low method, which considers the highest and lowest values of the cost driver and the total costs to which that cost driver contributes.

Alternatively, we can use regression analysis (or the method of least squares) for the cost behavior analysis. Unlike the high-low method, the regression method uses all the values and not just the highest and lowest values. We can use the regression function in MS Excel for this.

Cost behavior is an important concept in accounting. The efficient use of the concept would assist the management in exercising and managing control costs, and in turn, boost the profit margin.