The difference between absorption costing vs variable costing methods pertains mainly to the allocation of fixed manufacturing costs. As a result, they pose a difference in the value of inventory, and that consequently affects the reporting of operating income. Both absorption and variable cost methods are based on the accrual concept of accounting.

We are trying to explain the difference between absorption and variable costing under the following different aspects of each type of costing method.

What is Absorption Costing?

What is Variable Costing?

Treatment of Types of Costs under Both Methods

Table Showing Types of Costs whether Inventoried or Period Costs

We can notice that the principal difference between the two methods is the treatment of fixed manufacturing costs.

Let’s assume a company A is producing and selling pencils.

Following is their inventory data for the year 20XX.

The following is the cost data for the year 20XX.

Income statement under both method of costing i.e., Absorption and Variable Costing 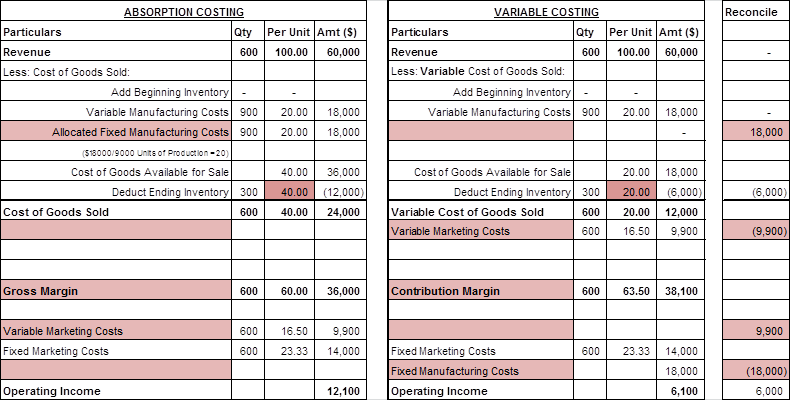 In the example above, we have highlighted areas where these two methods differ from each other.

This is the main difference between these two costing methods. In absorption costing, these costs worth 18000 are part of the cost of goods sold hence impacting the inventoriable cost by 20 per unit. In variable costing, they are deducted after contribution margin to find out operating income. However, this 18000 is part of both the income statements. Just that the place of the deduction is different.

In variable costing, variable marketing expenses are part of variable costs and hence deducted before contribution margin. On the other hand, in absorption costing, these costs are deducted after gross margin.

We can clearly see in the income statement, absorption costing reports an operating income of 12,100, whereas variable costing says an operating profit of 6,100. This is the same difference that we noticed in the value of inventory.

Thus, income reporting differs under both cost accounting methods. Based on the above example, we can clearly note that under the variable cost accounting method, the company usually ends up with a lower net income. The reason behind this is – all the fixed manufacturing costs are expensed in the same year, in which they are incurred. However, absorption cost accounting can also lead to inflated profitability and hence requires careful judgment when analyzing profitability. 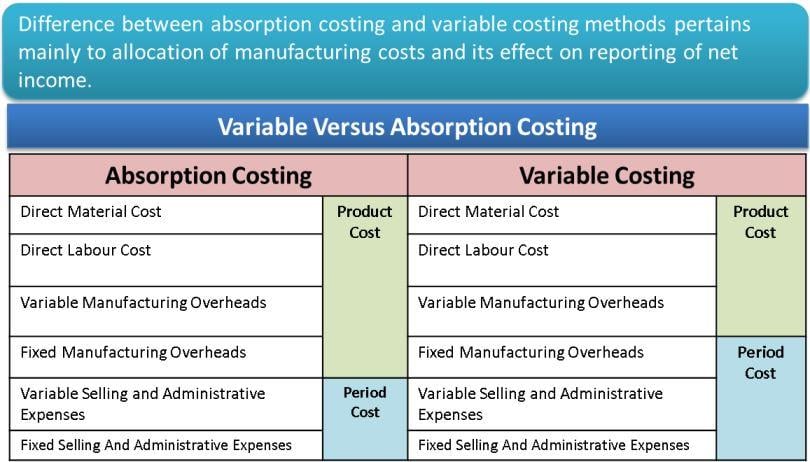 Most importantly, variable cost accounting is useful for internal management’s decision making purposes. On the other hand, absorption cost accounting is helpful for creditors, government agencies, suppliers as well as for the internal control. Absorption cost is also useful when the company doesn’t end up selling all of its manufactured goods and, as a result, creates inventory. This helps some cost base to be shifted to inventory.1–3