Collusive pricing or price collusion is a scenario when several companies agree to set the price of the good or service unanimously. Their objective could be to earn more profit or gain more market share. Such collusive pricing is often practised among duopolies or oligopolies. Price collusion is usually a non-competitive and secretive tactic, which may also be illegal.

Price collusion usually takes place when there are a small number of companies that offer the same product. These companies agree to set the prices. Collusion could be formal agreement either in writing or orally.

Let us understand collusive pricing with the help of a simple example. Suppose there are four companies A, B, C, and D. All four sell a very similar product but at different prices – $5, $6, $4, $7. Company A, B, C, and D agree on price collusion and set the price at $7. It benefits all four companies. Those selling at less previously will now get higher rates, while the one selling at $7 already won’t have to worry about competition.

Collusion is not just limited to price but may extend to other business activities as well. These activities could be marketing, production, output setting, and more.

Companies may agree for price collusion to: 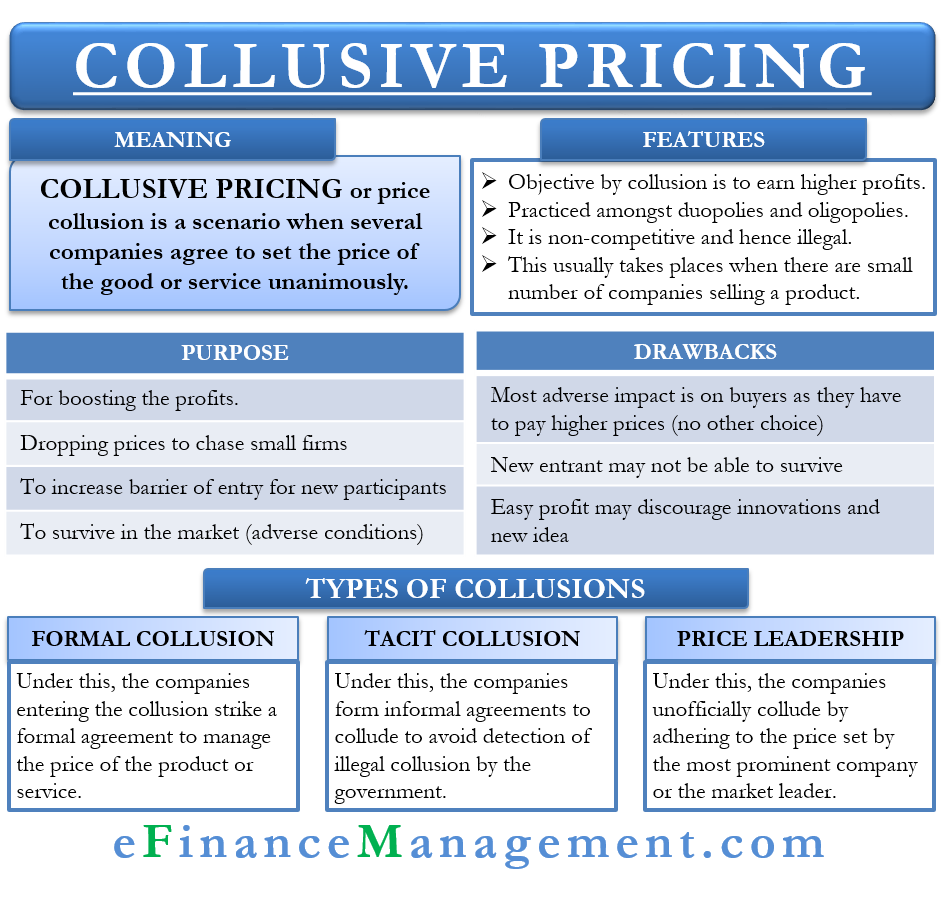 There are usually three types of collusive pricing:

Under this, the companies entering the collusion strike a formal agreement to manage the price of the product or service. It can result in a cartel, such as OPEC, which is an organization that controls the oil prices and decides about the production levels.

Under this, the companies form informal agreements to collude. The primary reason to do this is to avoid detection by government regulators.

Under this, the companies unofficially collude by adhering to the price set by the most prominent company or the market leader. Such a tactic allows the companies to earn more profit without even officially talking to the rival companies. For the authorities, it gets tough to detect such type of collusion as they are unable to prove if the collusion is intentionally or usual market tactics.

There are a few drawbacks of price collusion not just for the buyers or other companies, but for the colluding companies as well. These are:

Collusion – in any form – is unethical and harms market efficiency. Also, it keeps the buyers away from the benefits of the competition. Thus, many countries have laws prohibiting it, such as COMPETITION ACT 1998 in the U.K. Collusion is illegal in the U.S. as well. Several antitrust laws are in place to prevent companies from colluding.

Apart from the laws, another thing that discourages collusion is defection or cheating by any company part of the cartel. It means if a firm that first becomes a member of the collusion, but later starts to work against the interest of other members. It may happen when a company tries to cheat to take advantage of the high prices.

It may also happen that the company that cheats work as a whistleblower. This company may complain to the authorities about the colluding companies. Usually, whistleblowers do not face any penalty.

Can Collusive Pricing be Justified?

Mostly collusion in any form can’t be good for society as a whole. However, there are a couple of cases that can justify the collusion:

The first scenario is when an industry is facing a crisis. In such a case, the companies may collude to try and save each other. The dairy suppliers used similar reasoning in 2002/03 following issues from foot and mouth disease.

In 2007, British Airways and Virgin entered into illegal price-fixing arrangements. To offset the rising oil prices, the two companies made arrangements to fix the fuel surcharges.

In 2014, Apple, a distributor of e-books, made an out-of-court settlement after it faced allegations that it made arrangements with five of the biggest publishers to fix e-books price.

In 2018, several companies in the Canadian bread industry were found to be fixing the price for several years. Companies including Walmart Canada, Giant Tiger Stores, Loblaws Companies, Metro and more allegedly raise the rates of bread over the years.1–3