The first step to starting a due diligence process is to create a hypothesis. A hypothesis is a supposition for which further evidence is required. It is the starting point for further investigation. To start the process of due diligence, the hypothesis can be an assumption such as – “The valuation that the target company has submitted is correct”. Now the acquiring company has to conduct due diligence to conclude whether this assumption is true or false.

Once the hypothesis is decided, an investigation is started in every area of the company. Let’s look into it. 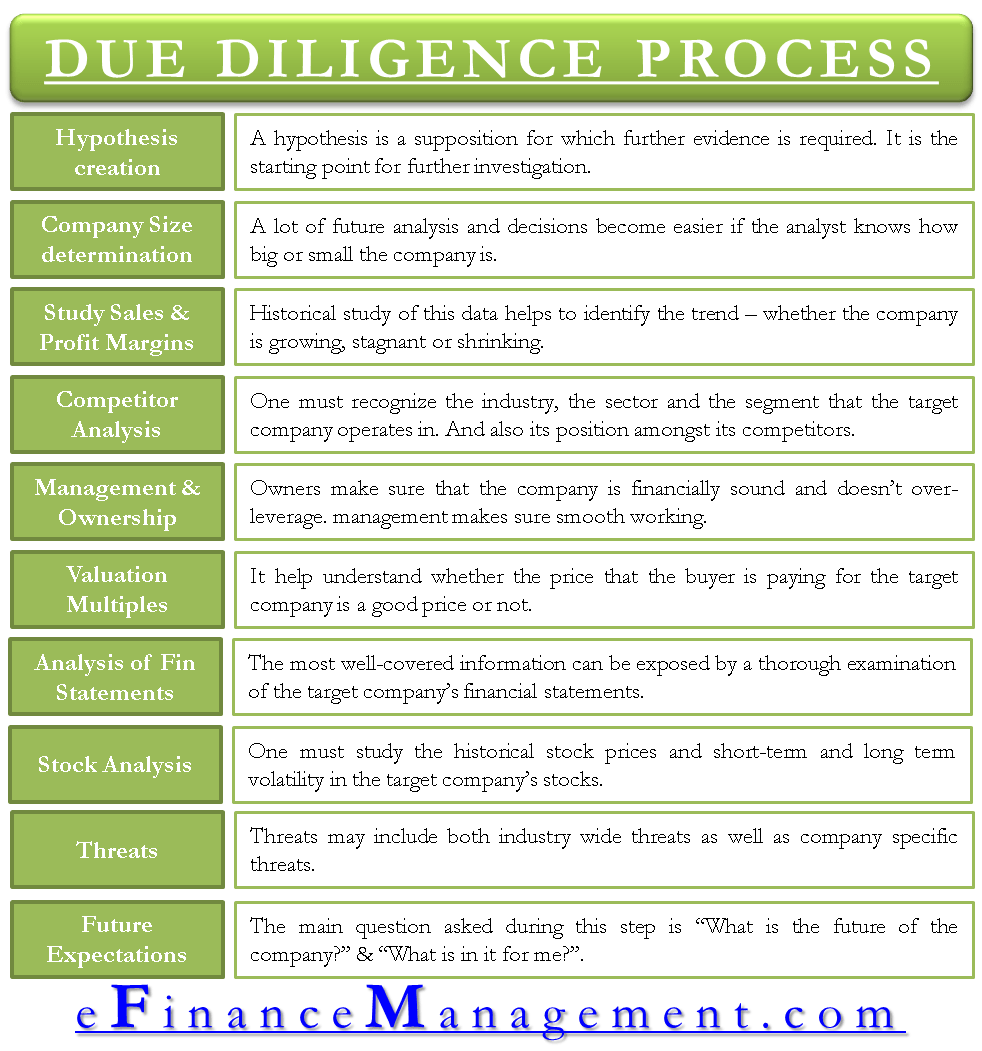 This will give the analyst a rough map as to what he is dealing with.

It is very important to study the revenue and profit margins of the company. Historical study of this data helps to identify the trend – whether the company is growing, stagnant or shrinking. Thereafter the analyst finds answers to questions such as – If the company is growing, what are its growth drivers? Are these sustainable? Can the merger bring any value addition to the target company’s revenue and profit margins? This will give insights to test the hypothesis.

The previous three steps show how the target company from outside, now it’s time to take look inside. The most important part of any company is its ownership and management. The ownership or the owners make sure that the company is financially sound and doesn’t over-leverage. On the other side, the management makes sure that the company is working smoothly, efficiently and its internal culture is that of harmony. A company that doesn’t have good owners and management staff eventually makes mistakes and fails.

One cannot stress enough about the importance of analyzing the financial statements of the company. A thorough examination of the target company’s financial statements can expose so many important information. One can find fairly simple facts such as the company’s cash flow and cash conversion cycle, how leveraged the company is, how efficient it is, etc. However, the analyst also find eye-opening information such as – has the company set us sister concerns just to deleverage itself? Is the majority sale of the company from one customer or multiple customers? Etc.

These answers can reveal a lot about the company and can raise questions for further investigation.

When an entity targets a public company for an M&A deal, it has to pay a price that is partly determined on the basis of the market price of its stock. One must study the historical stock prices and short-term and long term volatility in the target company’s stocks. Furthermore, one must also look into the future planning of stocks which includes factors such as future stock splits, dilutions, buy-backs, etc.

When investing in a company, an investor must understand the threats that he will have to deal with after the acquisition of or investment in the target company. These threats can be industry-wide such as slow economy, shortage of raw material, etc. or they can be company specific such as a very strong competitor, high debt expense, technology obsolescence, and its replacement expense, etc.  A SWOT analysis is useful in this step of the due diligence process. Further precautions can be taken during the deal to reduce the effect of threats.

By this time the analyst has a rough estimate about everything from future revenue, profit, etc. to future investments in assets, future exit strategies, et.. The main question asked during this step of due diligence process is “What is the future of the company?” & “What is in it for me?”. Now the investor has a rough idea of where the company is standing today and what can be expected in the future. Further, the investor asks

Finally, after the step-by-step due diligence process is conducted, the final report is made. This final report concludes and draws assumption about the current and future valuation of the target company, the fair price that can be paid for the company, and how the target company will add value after the merger/ acquisition. These conclusions are tested for the hypothesis established in the first step of the due diligence process. If the hypothesis is true the investor will move further, otherwise, there are chances of the deal falling apart.1

Last updated on : August 19th, 2019
What’s your view on this? Share it in comments below.
Pin It Tweet