Depending on various economic and social parameters like climatic impact, conflict among union and others there might be uncertainties, which could possibly have an impact on the company’s performance. Therefore, LTM draws a reliable conclusion and average out the impact of such parameters. For example, The balance sheet of the company remains unaffected by any of such parameters, as it is framed at a static time and date.

How to Calculate LTM Revenue?

Analysts use LTM revenue to evaluate the value of the firm or to rate it like neutral, below average and so on. Evaluation classifies the potential growth of the company and compares it with the peers. Furthermore, to gauge the latest trend of a company, the company’s previous 12 months performance is compared with the performance of the peer companies. To ascertain the company’s financial ratio, LTM assesses the latest trend. For a US-based company, LTM figures are calculated by the company’s 10-K and 10-Q reports. 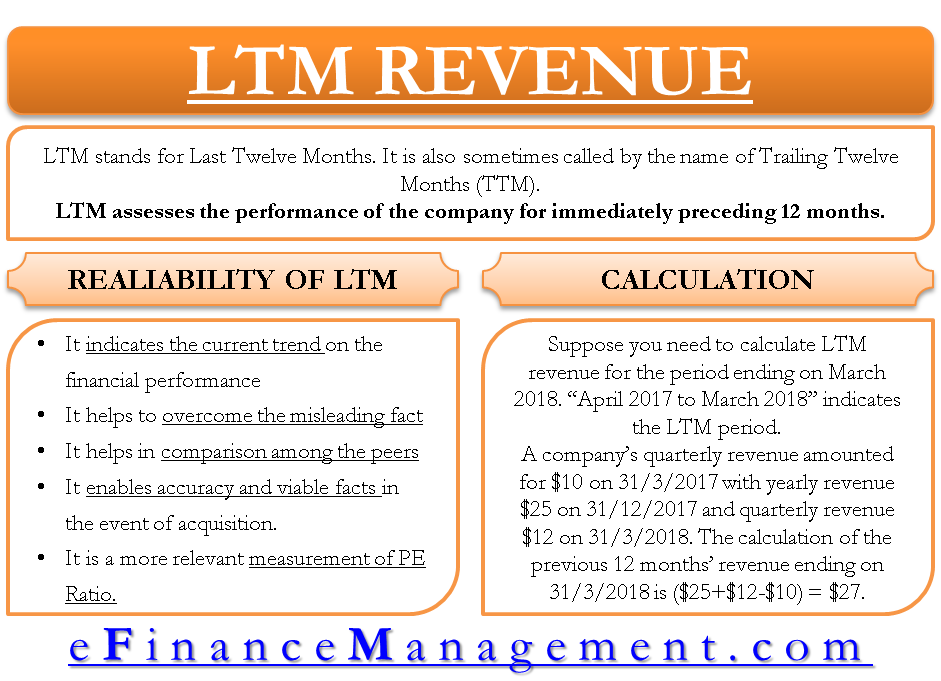 Why Does Analyst consider LTM a reliable parameter?

LTM represents an appropriate and true picture of finances, without any dependence on economic and social factors. Further, LTM uses financial ratios to ascertain the true value of the company like eps and dividend yield. An alternative method for LTM evaluation is on Pro-Forma basis. Besides the past 12 months of performance, LTM also includes the impact of any specific event that might have occurred. This event can be the induction of a new product, acquisition or expansion of manufacturing unit. Pro-forma indicates the picture of finances if a specific event had taken place.1234