It is one of the popular methods of financial analysis as it is simple to implement and easy to understand. Also, the method makes it easier to compare the performance (even line by line) of one company against another, and also across industries.

Moreover, it also helps in comparing the numbers of a company between different time periods (trend analysis), be it quarterly, half-yearly or annually. For instance, by expressing several expenses in the income statement as a percentage of sales, one can analyze if the profitability is improving. Thus, it also helps in keeping a check on the expenses.

For example, if the selling expenses over the past years have been in the range of 40-45% of gross sales. For the current year, they suddenly jump to say 50%, this is something that management should check.

Such a technique also helps in identifying where the company has put the resources. And, in what proportions have those resources been distributed among the balance sheet and income statement accounts. Moreover, the analysis also helps in determining the relative weight of each account, and its share in the revenue generation.

Such an analysis also helps in understanding the percentage/share of the individual items, and the structural composition of components, such as assets, liabilities, cost, and expenses. Additionally, it not only helps in spotting spikes but also in determining expenses that are small enough for management not to focus on them.

How it’s Different from Horizontal Analysis?

In the above example, the year 2000 is taken as the base year. Horizontal Analysis helps to identify the trend more easily. Like the example above clearly shows that the selling expenses of a firm have grown each year. 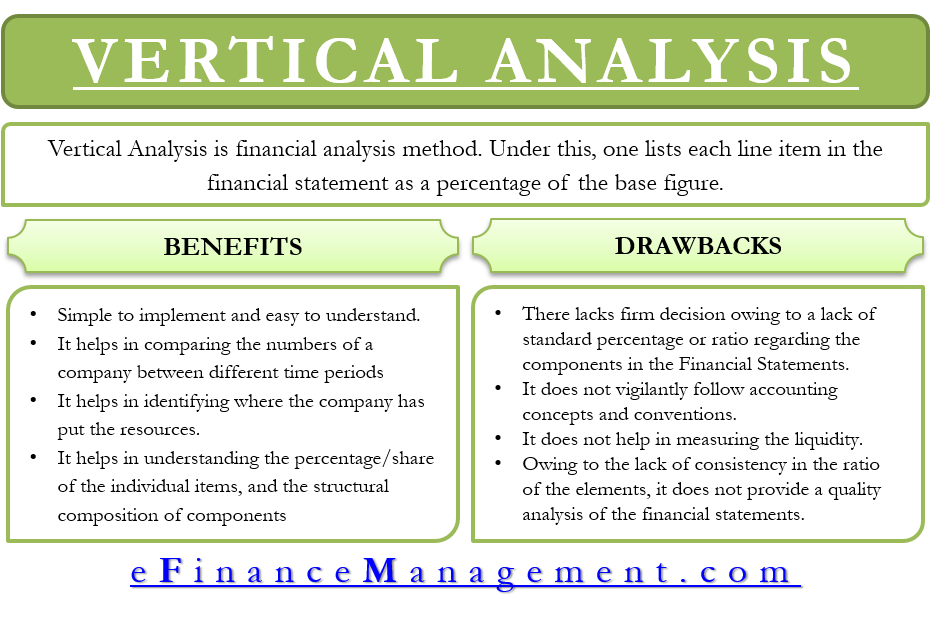 In the vertical analysis of a balance sheet, a major question is what to use as a denominator. Usually, it is the total asset, but one also can use total liabilities for calculating the percentage of all liability line items. For the equity line item, we can use a total of all equity accounts. Such an analysis helps in evaluating the changes in the working capital and fixed assets over time. Investigating these changes could help an analyst know if the company is shifting to a different business model.

Following is an example of vertical analysis for a balance sheet where each line item is a percentage of total assets:

In the above table, we see that COGS (Cost of Goods Sold) for the company spiked in year three. Such a spike leads to a significant drop in gross profits. Such a drop could be due to the higher cost of production, or from the drop in the price as well. Though the example shows an increase in the COGS, we can’t be sure unless management confirms it.

To make it clear lets’ take a simple example. Suppose it takes $50 now to produce a product which sells for $100. In this case, COGS will be 50% of the sale price. Now, assume that the company reduces the cost of the product to $90, but the cost to produce it remains the same. The COGS to sale price will now be about 56%.

So, we can say that vertical analysis is a good tool to know what is happening in the financial statements. But, it can’t really answer “Why.” Like, in the above example we know cost is a major reason for the drop in the profits. But, we can’t be sure if the costs have actually risen, or the management has cut the prices of the product.

Thus, it will be best not to use vertical analysis as a tool to get an answer, but use it to figure out what questions one may ask.1,2

Last updated on : August 19th, 2019
What’s your view on this? Share it in comments below.
Pin It Tweet