Fixed cost as the name suggests is the expense that does not change very frequently and is recurring. For instance, a company will have to pay a fixed rent every month irrespective of the revenue it generates. This cost to the company might not change under normal business circumstances. 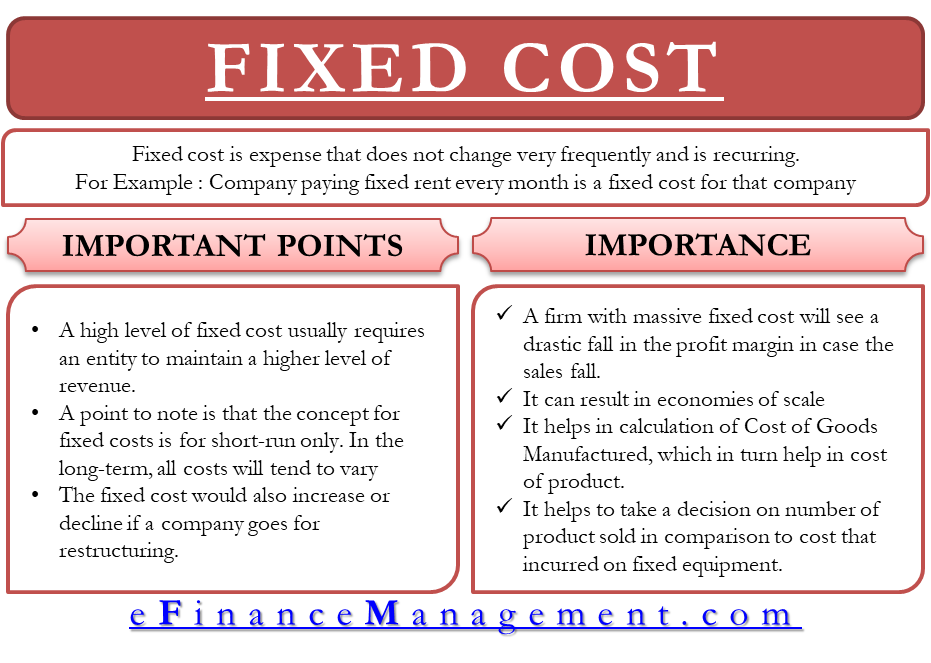 What Does it Include?

Every company needs to understand the nature of the fixed costs that they are incurring. A high level of the fixed cost usually requires an entity to maintain a higher level of revenue. There are various types of fixed cost that a company incurs. These are Depreciation, Interest Expense, Amortization, Insurance, Rent, Utilities, Salaries and more.

Moreover, there are various manufacturing overhead costs that are fixed and the amount for a large proportion of the company’s total expenses. Some examples are depreciation of machinery and equipment, salaries and benefits of manufacturing supervisors, factory administration costs, and more.

Accountants face a challenge when they have to assign the fixed cost to different individual output units. Such allocation is important for valuing inventories and cost of goods sold (COGS). In various manufacturing facilities, a manager assigns fixed cost using machine hours. However, one should consider that the cost rate per machine hour does not reveal how the cost occurs or behaves.

A point to note is that the concept for fixed costs is for short-run only. In the long-term, all costs will tend to vary, be it rent, salaries, depreciation, maintenance cost, and more.

The fixed cost would also increase or decline if a company goes for restructuring. A company that is looking to pay less in rent would shrink the space and vice versa. The idea is that fixed costs are not as dynamic as the variable cost, and a company can’t avoid it.

Fixed cost is not the same across all the industries. An industry with higher fixed costs generally presents a challenge for newer competitors to enter the space. A capital intensive industry would incur long-term fixed costs compared to the other businesses. For instance, auto manufacturers, airlines and companies involved in the drilling operations might incur higher fixed costs.

On the other hand, businesses with a focus on services such as insurance and tax will be more dependent on labor. Therefore, a comparison of such costs is apt between companies in the same industry, and not with different industry.

Last updated on : July 5th, 2019
What’s your view on this? Share it in comments below.
Pin It Tweet