What are Exchange Rates?

“Exchange rates is an amount of the domestic currency you will have to pay to obtain a unit of a foreign currency.”

Imagine for a moment, the new year is just around the corner. You have finally been able to approve your vacation leave from your boss and you have painstakingly managed to accumulate savings needed to go backpacking across Europe. Like an arrow shot from a bow, you take the first flight out and finally land on European land. The flight was a long one and you feel famished and look for a Subway at the airport. Having custom-made your own lip-smacking Sub you pull out a wad of dollars and slide it across the counter to make the sandwich yours. The cashier throws you a puzzled look. Just then you come across the sign “We Only Accept Payment in Euros”. It finally sinks in!

The Sub was selling at a price of €3. Since you only held US Dollars, you rushed to get your money converted into Euros from the currency exchange. The exchange rate quoted for the day stood at $1.17 per €1. In simplified terms, a person wishing to convert dollars will have to give up $1.17 to obtain a unit of Euro. Therefore, the amount in dollars given up to pay for the Sub equal (1.17 * 3) $3.51.

A fixed exchange rate, also known as the pegged exchange rate, is “pegged” or linked to another currency or asset (often gold) to derive its value. Such an exchange rate mechanism ensures the stability of the exchange rates by linking it to a stable currency itself. Also, a fixed currency system is relatively well protected against the rapid fluctuations in inflation. Some countries following a fixed rate system include Denmark, Hong Kong, Bahamas & Saudi Arabia.

A country with a fixed exchange rate system is attractive to foreign investors who are lured to invest in that country due to the stability it offers.

The government of a country following such a system has to maintain a huge amount of foreign exchange or gold reserves to maintain its value. This system thus proves to be an expensive one.

Flexible or Floating exchange rate systems are ones whereby the rate of a currency is determined by the market forces of demand and supply. Unlike the fixed exchange rate they do not derive their value from any underlying. Some economists argue that a floating system is more preferable since it absorbs the shocks of a global crisis and automatically adjusts to arrive at an equilibrium.

The central bank of the country may interfere in economically extreme situations such as the recession or boom to stabilize the currency. They may buy or sell an amount of the currency to prevent the rates from going haywire. This phenomenon is known as the managed float.

The rates under this system are determined by a self-sufficient mechanism. Therefore, the dependence on government or international monetary organizations is minimum. Also, the determination of rate by the market forces of demand and supply promotes efficiency and robustness of operations.

Floating rate systems are prone to greater volatility since they are determined by the market forces. The increased volatility increases the risk quotient in such markets consequently making it a relatively expensive place for foreign investors.

A forward rate is one that is determined as per the terms of a forward contract. It stipulates the purchase or sale of a foreign currency at a predetermined rate at some date in the future. A forward contract is generally entered into by exporters and importers who are exposed to Forex fluctuations. The forward rate is quoted at a premium or discount to the spot price.

A forward contract freezes the rate of exchange for both parties and thus eliminates the element of uncertainty. Therefore, it provides a complete hedge against all unruly movements in the market.

A forward contract is not backed by any exchange. Therefore the possibility of default is quite high. Also freezing the rates may prove to be a loss-making decision in some situations. For example, a long forward in a bearish market or a short forward in a bullish market are instances of the forward backfiring.

The spot rate is the current exchange rate for any currency. It is the rate at which your currency shall be converted if you decided to execute a foreign transaction “right now”. They represent the day-to-day exchange rate and vary by a few basis points every day.

Trading at a spot rate does not require deep mathematical or statistical analysis. It is what it is. It is a straightforward rate without any ambiguity.

Spot rates can be a misleading indicator in times of economic crisis, unreasonable demand or supply patterns or temporary transitional phases in an economy.

In this type of system, the currency rate is maintained separately by two values-one rate applicable for the foreign transactions and another for the domestic transactions. Such systems are normally adopted by countries that are transitioning from one system to another. This ensures a smooth changeover without causing much disruption to the economy.

Countries enforcing a dual exchange rate can enforce separate rates for capital and current account transactions. Therefore a significant amount of control is with the government whereby it can influence revenues from capital or current sources depending upon the need of the hour. It also becomes easier to regulate international trade and at the same time protect the domestic markets.

A dual exchange rate system may cause a mis-fixing of the exchange rate and consequent misallocation of resources in various industries. Because of these several economic anomalies such as black markets, arbitrage opportunities and inflation may emerge. 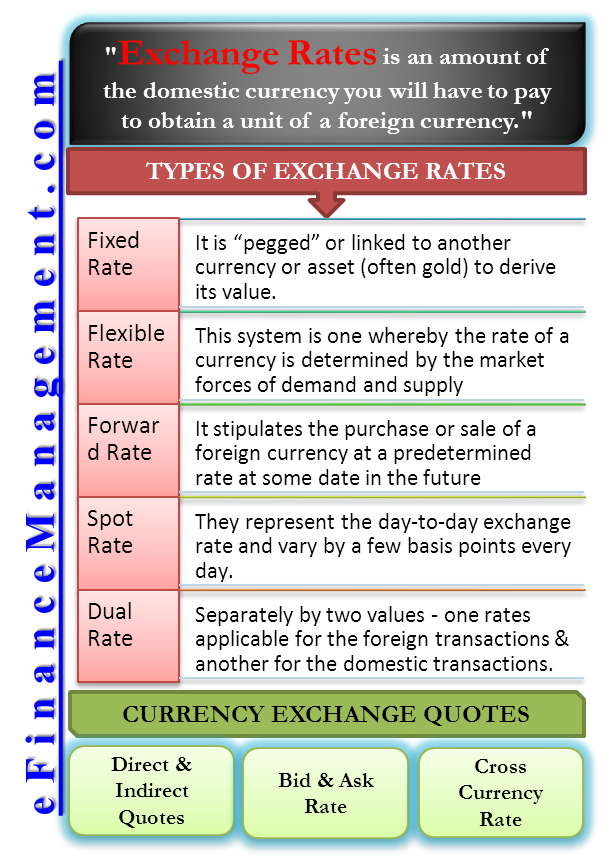 An indirect currency quote denotes the domestic currency as the quoted currency. Or in simpler terms, the value of our home currency is expressed in terms of the foreign currency sought to be acquired or sold. For example, EUR/USD 0.87. This means that a European Currency holder will have to give up 0.87 Euros to acquire 1 USD.

The former part of the quote USD/EUR 1.1681 is known as the bid rate. Bid Rate is the rate at which the bank will pay you should you go to it to buy Euros against USD. It is nothing but the buying rate for the bank.

The latter part of the quote USD/EUR 1.1685 is known as the ask rate. Ask Rate is the rate which the bank “asks” from you to obtain a unit of Euro against the value in the dollar. It is nothing but the selling rate for the bank.

It is important to know that the ask rate will always exceed the bid rate. The bank will always buy at a lower rate and sell at a higher rate. The simple reason for it is that the difference is the margin that the bank earns for facilitating such currency exchange.

Reserve currency or an anchor currency is essentially the one in terms of which most other currencies are expressed. Such currency is held in large amounts by governments as Forex reserves. The US Dollar is currently the most widely held reserve currency followed by the Euro.

Consequently, a currency quote not expressed in terms of USD is known as a cross rate. All dominant and frequently traded currencies are translated in terms of USD. However, certain transactions may be such that they do not contain the dollar component at all. In such cases, the currency quotes are required to be expressed at a rate relative to one another to facilitate that exchange.

The following example shall clear the concept.

A manufacturer in Germany wants to obtain certain automobile parts from a supplier in Australia. The supplier only accepts payment in Australian Dollars (AUD). Therefore, the German manufacturer will be compulsorily required to convert EUR to AUD to close the contract. The amount payable to the Australian Supplier is AUD 350,000.

The following quotes are quoted by the exchange.

The quote relevant to the German manufacturer is EUR/AUD

Therefore, the same is obtained by carrying out the simple working mentioned below

The simple multiplication of (bid*bid)-(ask*ask) gives the required cross rate.

Quiz on Types of Exchange Rates

1 thought on “Types of Exchange Rates”