Euro Commercial Paper (ECP) is an unsecured, short-term debt instrument that is denominated in a currency differing from the domestic currency of the market where it is issued. The ECP works to be an attractive short-term financing tool for firms that wish to reduce forex market risk.

On knowing the meaning of Euro Commercial Paper, let us know about the characteristics for the same.

The following are the characteristics of Euro Commercial Papers:

After understanding the characteristics of Euro Commercial Papers, we will see the benefits involved with it. 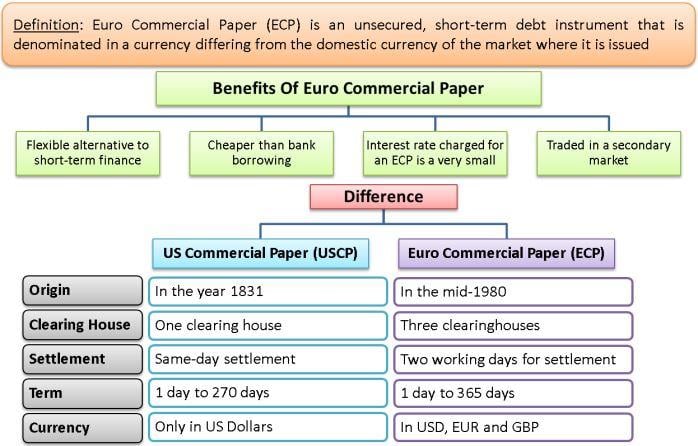 The following are the benefits of a Euro Commercial Paper:

The principals and operations of US Commerical Paper (USCP) and Euro Commercial Paper are similar; however, some distinct features for both have been identified below:

The USCP market started in the year 1831 as a prime source of short-term funding in the US domestic market. However, the ECP market is relatively new and originated in the mid-1980.

The issue of USCP is only in US Dollars. Whereas, an ECP is issued in USD, EUR, and GBP.

Euro Commercial Papers have grown in popularity over the years and attracted the interest of large European companies in the requirement of short-term loans.

Also read: Bill of Lading and its types and International Financial markets.1–4