Solvency ratios are useful in measuring a company’s solvency thereby evaluating the company’s financial health. A company’s solvency is determined by how much money it has borrowed as debt & its ability to repay this debt apart from its regular obligations. A leveraged firm can deliver to its shareholders only if its rate of return on investments financed by debt is greater than its cost of debt. In order to grow, it is inevitable for any company to borrow on interest, but it is important to monitor how the borrowed funds are used. Solvency ratios give an indication of this usage and try to answer the question – “whether a company’s debt is actually bringing value to the company?”

Following are the solvency ratios:

Solvency ratio as the name itself suggests is a ratio to measure a firm’s ability to remain solvent in long term. It is the key ratio to determine a company’s ability to pay its long-term debt and other debt obligations. For better understanding, let us have a look at its formula:

The formula of solvency ratio is

Solvency ratio is a more comprehensive measure of solvency as it takes into account cash flows instead of net income. It is good to have high solvency ratio, the higher the better. In general terms solvency ratio above 20% is good. So in our example, the solvency ratio of 24.92% is solid. It can be said that if Apple Inc. is consistently having same business every year, then it will be able to repay all its debts in 4 years (24.92% X 4 years = 100% approx.) 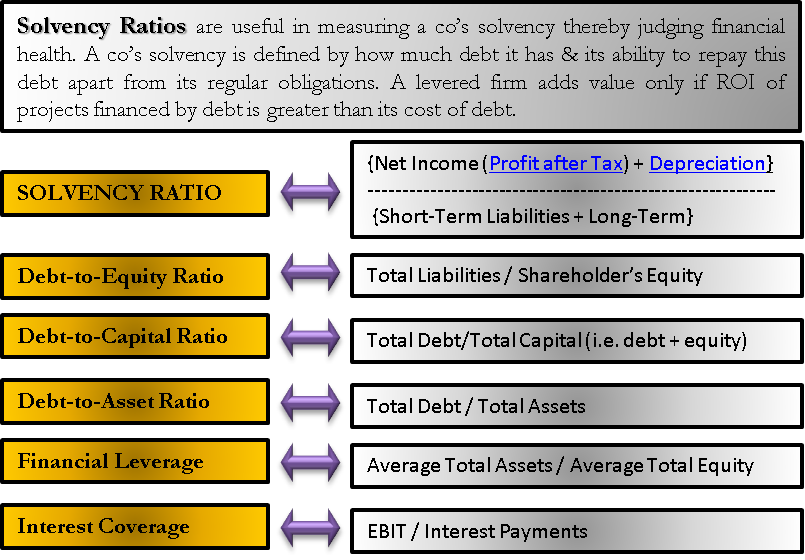 There are some other measures of solvency in different terms which are discussed below:

The formula of debt-to-equity ratio is:

The formula of debt-to-capital ratio is:

The formula of debt-to-asset ratio is:

The formula of financial leverage ratio is:

The formula of interest coverage ratio is:

Learning with an example

From the above example, we can interpret that –

From Debt-to-equity ratio, we can interpret that the company’s debt is 97% of equity, i.e. for 1 dollar of equity, the company has USD 0.97 of debt. The company is highly leveraged because it has a very high amount of debt liability. It is important to know if the company is generating enough returns to repay all the debt & interest liabilities.

From Debt-to-capital ratio, we can say that 49.23% of company’s total capital comes from debt. This can be interpreted similar to debt-to-equity ratio and needs further analysis.

From Debt-to-assets ratio, we can interpret that only 17.52% of the assets are financed by debt. This actually indicates good financial standing because even though the company is financed by almost 50% debt, almost 82% of its assets are debt free.

Furthermore, it is extremely important to understand that ratio analysis is very subjective. An analyst must consider solvency ratios in a broader context. That being said, the ratios of a company must be compared to its competitors as well as industry & sector benchmark ratios. Also, it is important to consider not only solvency ratios but also profitability ratios, liquidity ratios activity ratios & other valuation ratios of the company. A clear big picture analysis is required to reach a conclusion about long-term prospects of any company.1