Upon winding up of company on account of insolvency, the company liquidates its assets to settle the outstanding claims of its creditors and shareholders. How these claims will be settled from the liquidation proceedings is determined by the rule known as Absolute priority.

What is Absolute Priority?

Absolute priority is a rule that determines the order of the payments to creditors and shareholders of the company. The other name of absolute priority is the liquidation preference rule. It is applicable in cases of bankruptcies for settlement of payment of the outstanding amount in the preferential order of claimants.

The absolute rule also applies to the individuals who liquidate their assets to settle their outstanding claims. The secured claim invariably has priority in case of payments over the unsecured claim. It also even applies upon the liquidation of assets of a deceased person. All the outstanding debts of the dead will be settled before distributing any of the assets to the beneficiaries.

Section 1129(b) (2) of the U.S Bankruptcy Code safeguards the interest of the creditors by ensuring the liquidation plan to be fair and reasonable to them. The absolute priority rule prioritizes the payments in the following order to provide fair and equitable treatment: 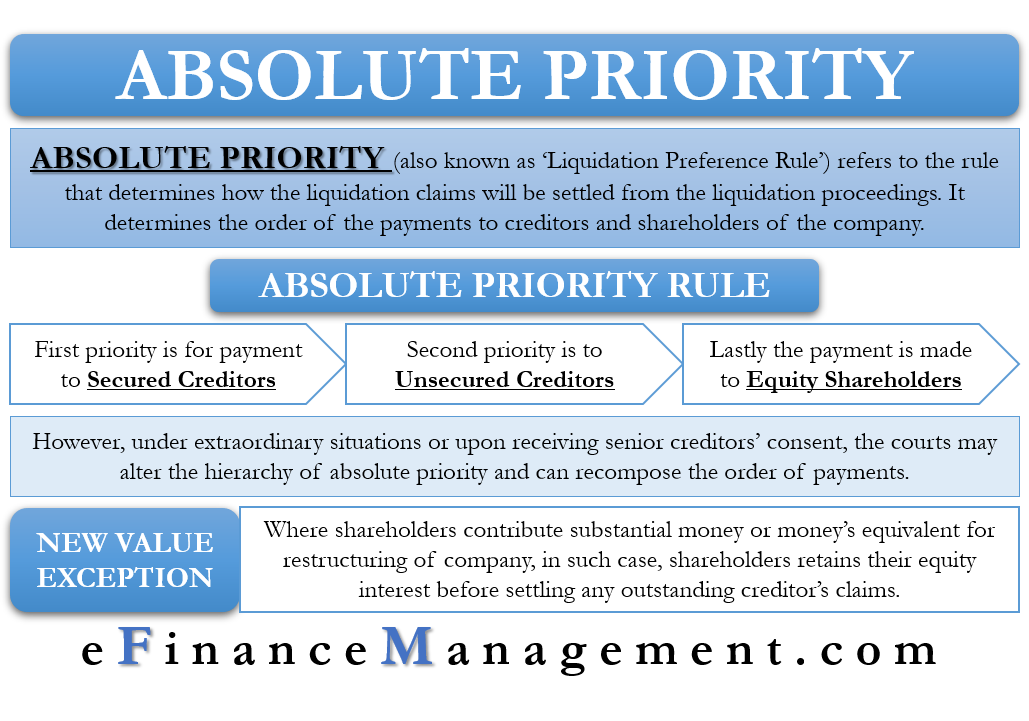 Note: Before any compensation to the creditors, a certain amount of funds are kept aside for disbursement of unsecured priority claims like back pay, such as wages, tax claims, and welfare benefits.

Sometimes when a company files for bankruptcy in court, some disputes regarding the settlement of claim upon liquidation may occur. In such a case, the courts affirm the absolute priority rule. For example, if the group of creditors and debtors upon mutual consent tries to exclude some participants from the distribution of the liquidation proceedings. In this situation, the courts maintain that first payment to the secured creditors, then to the unsecured creditors, and finally, equity holders provided the availability of resources, if any.

However, under extraordinary situations or upon receiving senior creditors’ consent, the courts may alter the hierarchy of absolute priority and can recompose the order of payments.

There is an exception to the absolute priority known as New value Exception. This exception helps the shareholders to retain their equity interest before settling any outstanding claims of the creditors. Such an exception is applicable if shareholders contribute money or something equivalent to money’s worth for the restructuring of the company. And when that contribution for equity holders is substantial and essential.