Return on Invested Capital or ROIC attempts to measure the returns earned on capital invested by a company. It is a profitability ratio and it measures the return generated for those who have provided capital to the company. ROIC evaluates how good a company is at allocating capital and generating maximum profits.

In order to increase earnings, a company has to invest in its capacity for production of goods and services. This investment may be in plant and machinery, technology, inventory, supply chain and the likes. For every dollar that is spent by the company, an additional level of earnings can be expected in future. For example, a company that earns $1 spends that $1 to buy additional inventory. This additional inventory is then sold @ say $1.10 the following year. This means the company has earned a “return on invested capital” (ROIC) of 10%. 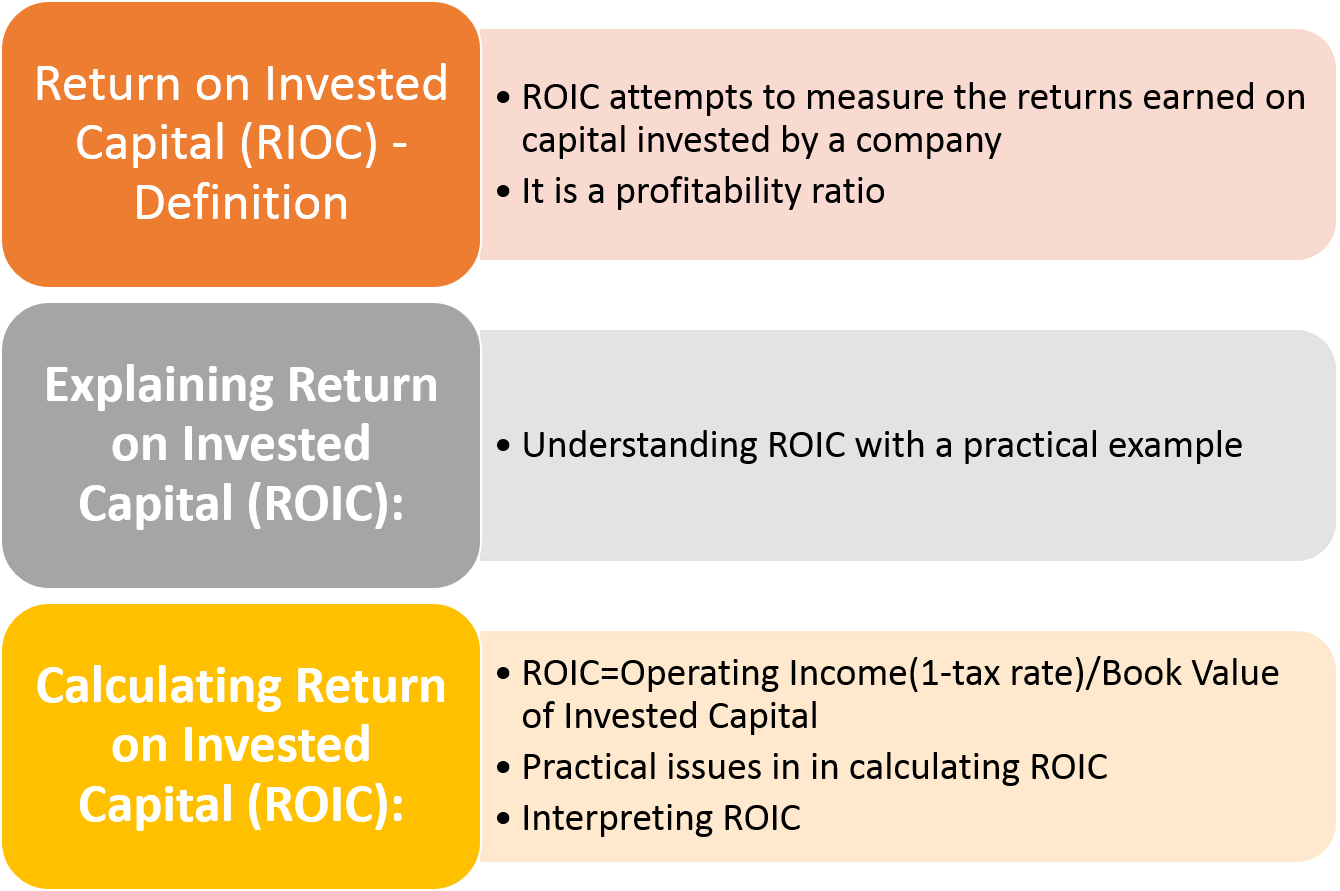 Calculating ROIC can be a little complicated as the formula contains nonstandard values. This means the values cannot be found in any standard financial statements. They must be calculated.

The formula for Return on Invested Capital (ROIC)

There are five key components of this formula

Even though calculating ROIC is conceptually straightforward, there are many practical issues that have to be considered. This is mainly because invested capital doesn’t take into account intangible assets such as goodwill or money spent on development of human capital and the likes. Even though such investments increase operating income and are reflected in cash flow, they are not reflected in ROIC.

A truly great business must have an enduring “moat” that protects excellent returns on invested capital.” – Warren Buffet Shareholders letter 2007.

In the above sentence, Warren Buffet tries to explain the importance of ROIC in determining a company’s “competitive advantage” which in Warren Buffet’s words is “moat”. Return on Invested Capital (ROIC) by itself doesn’t tell much about a company’s competitive advantage in the market. A company creates value for its investor only if its ROIC is higher than its weighted average cost of capital (WACC). WACC measures the required return on the company’s debt and equity. It also takes into account the risk of company’s operations & its use of debt. Generally, companies that generate ROICs higher than their WACC for many years creates values for its investors and have a competitive advantage in the sector.

When a company’s ROIC is lower than the return on shareholder’s equity (ROE), it exhibits that the company’s returns are the result of the use of borrowed money i.e. leverage. Borrowed money can boost returns when markets are bullish and everything is working out well.  As soon as the markets slow down or face even minor dips, such leveraged companies will feel the sting. Especially during the credit crisis, if the borrowing costs rise, a highly leveraged company will see its ROIC fall.

Return on Invested Capital (ROIC) is an extremely powerful tool – it looks at earnings power relative to the amount of capital that is tied up in a business. It’s easy to grow earnings by pumping more money into a business, but it’s a lot tougher to do so without affecting ROIC. Even though a positive ROIC is a good indicator of company’s competitive advantage, it is important to look at the company holistically before coming to any conclusion. Especially qualitative factors such as high barriers to entry, huge market share, low-cost production, corporate culture, patents, or high customer switching costs, which create an economic moat around a company’s profits should be considered.

It is also important to note that achieving high ROIC maybe easy but maintaining an ROIC above WACC is not an easy task. If a company is earning a high ROIC in a particular market, it will naturally attract competition until excess returns are eroded away. It is the most natural economic phenomena. It is important to ask questions such as – How does current ROIC compare to historical ROIC? The companies in which ROIC is high, what are the chances of it can be maintained?1,2