CAPE Ratio stands for Cyclically Adjusted Price Earnings Ratio. It is the price-earnings ratio calculated for ten years instead of being calculated for a particular date or year. The ratio was first coined by the prominent American economist Robert Shiller. Therefore, it is also known as “Shiller P/E”. Another name for the ratio is the “P/E 10” ratio.

The formula for calculation of this ratio is:

This financial ratio uses to assess whether a stock is overvalued or undervalued over a while. The share price is divided by the company’s earnings per share for calculation of the Price Earnings ratio. EPS or Earnings per share is calculated by dividing the Annual Net Income by the total number of outstanding shares.  The only difference between the P/E ratio and CAPE ratio is that the P/E ratio is for a particular point of time. In contrast, the calculation for the CAPE Ratio happens for ten years.

Investors use this ratio to ascertain if the pricing of the stock is correct or not. It also shows that investors are willing to take risks and invest to receive one unit of its earnings. Cyclical adjustment of the earnings shows the effect of business cycles and ups and downs. Also, it takes into account the impact of inflation, deflation, and even stricter situations like depression on the earnings of business over the last ten years. Thus, it helps to give a broader picture of a company’s sustainability of profits and earnings over so many years. 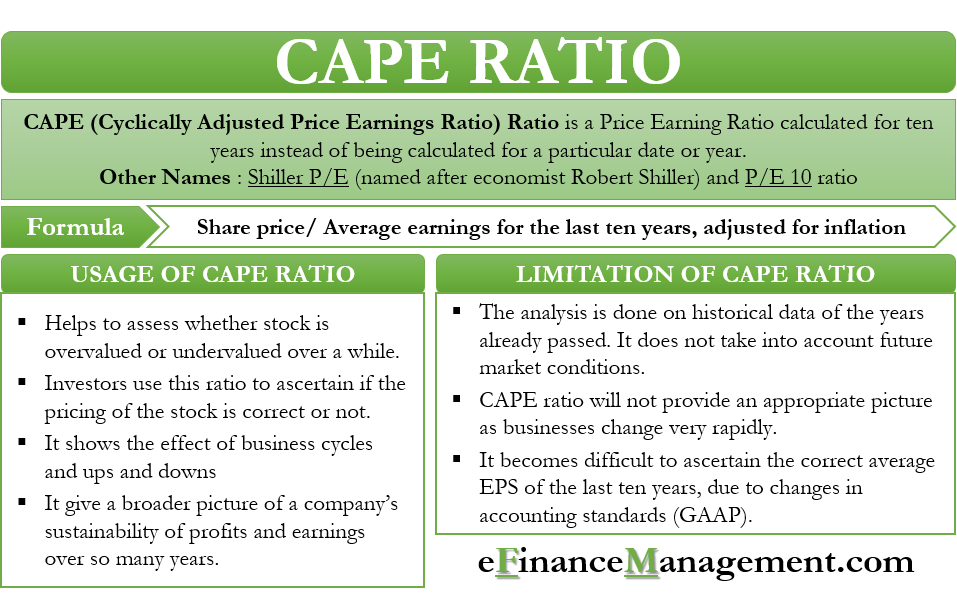 CAPE ratio provides a broader picture than the P/E ratio since one year is too short to judge the real earning potential of any business. Also, business conditions can be volatile in a particular year12. It will present an incomplete picture to the investors, which might result in ill-informed investments.

Some of the limitations of the CAPE ratio are:

CAPE Ratio is another way of looking at the market direction. But this is based on the past averaged earnings. Hence, it can’t be relied on entirely, as the stock market is the most dynamic. There would have been significant changes during the past, and thus the results may not be accurate. CAPE Ratio interpretation happens along with other indicators.