After knowing the meaning of economic exposures, let us know how to determine the same.

The following are the two factors that help in determining economic exposure:

After gaining an insight on how to determine economic exposure, we will have a look at how to manage the same. 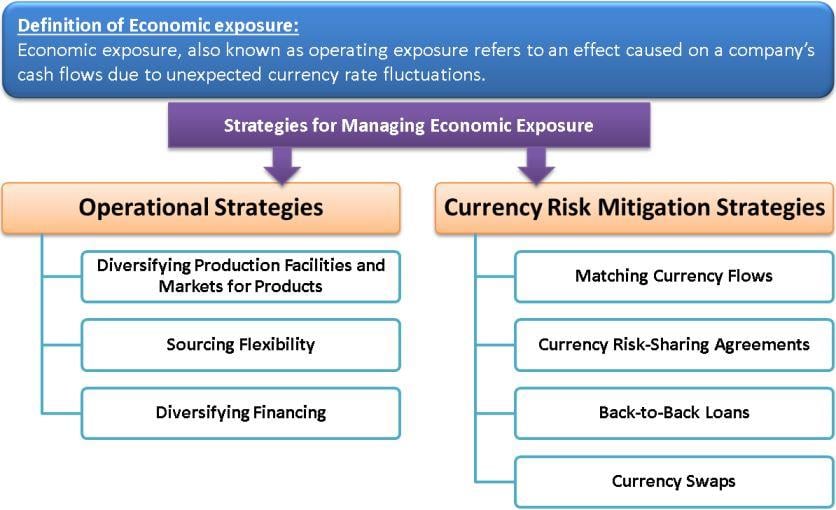 The risk of economic exposure can be hedged either by operational strategies or currency risk mitigation strategies.

The following are the operational strategies which can be used to alleviate the risk of economic exposure:

Diversifying the production facilities and sales to a number of markets rather than concentrating on one or two markets would mitigate the risk inherent. However, in such cases, the companies have to forgo the advantage earned by economies of scale.

Companies may have alternative sources for acquiring key inputs. The substitute sources can be utilized in case the exchange rate fluctuations make the inputs expensive from one region.

A company can have access to capital markets in a number of major regions. This enables the company to gain flexibility in raising capital in the market with the cheapest cost of funds.

The following are the currency risk mitigation strategies which can be used to alleviate the risk of economic exposure:

This is the simplest form of mitigating economic exposure by matching foreign currency inflows and outflows. For example, if a European company has significant inflows in US dollars and is looking to raise debt, it should consider borrowing in US dollars.

This method, also known as credit swap involves two companies located in different countries entering into an arrangement to borrow each other’s currency for a fixed period of time. Once the defined period is over, the currencies are repaid.

The currency swap method is similar to the back-to-back loans method, however, does not reflect on the balance sheet. This method involves two firms who borrow currencies in the world market where each can benefit from the best rates and then swap the proceeds.

An awareness of the impact of economic exposure can help firms take steps to mitigate this risk. Investors should identify stocks and companies that have major exposures and make better investment choices during times when exchange rate volatility is at its peak.1,2