What is Agency Cost?

Types of Conflicts and Parties Involved in Agency Cost

Due to the above problems, the business faces two types of agency costs, they are 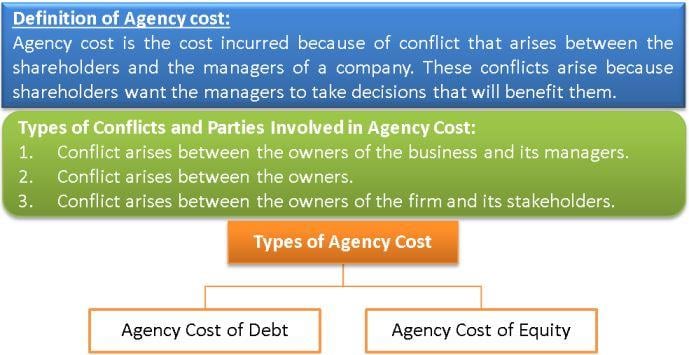 How to Reduce Agency Cost

Dealing with agency problems is never free. It involves agency cost to cope up with the conflicts. In the accounts, the cost incurred is usually categorized under operating expenses.

One of the examples of agency cost is, expenses incurred by the managers on booking most expensive hotels for business trips. Shareholders may find this as unnecessary cost leading to an increase in the operating costs of the company. Therefore, the cost incurred on monitoring the managers regarding such personal expenses is what forms agency cost.

Agency cost can be reduced by introducing monitory techniques in the organization. Such techniques include establishing budgets, following proper accounting procedures, getting approvals, etc. These techniques can eliminate or put a limit on the expenditures.

Agency cost is a part of every organization. These costs hurt the organization and the shareholders. Thus, it is the duty of the business owners and managers to be vigilant and prudent in decision-making. These costs can be avoided if the management is proactive and willing to take quick actions in case of any conflicts in the organization.1–4