Contribution margin helps in studying how revenue or sales affect profits or net income. It is expressed as a percentage, and we can calculate the contribution margin ratio by subtracting sales from variable expenses and dividing it by sales. Basically, it tells the marginal benefit of making or producing one more unit. In absolute terms, it represents the earnings available to pay for the fixed expenses.

We can calculate contribution margin in three forms – In total; Per unit and As a ratio. All three forms together help us understand how different factors – sales price, sales volume, variable costs, and fixed costs – connect to each other. Thus, they allow managers and management to make better decisions when it comes to sales and costs. 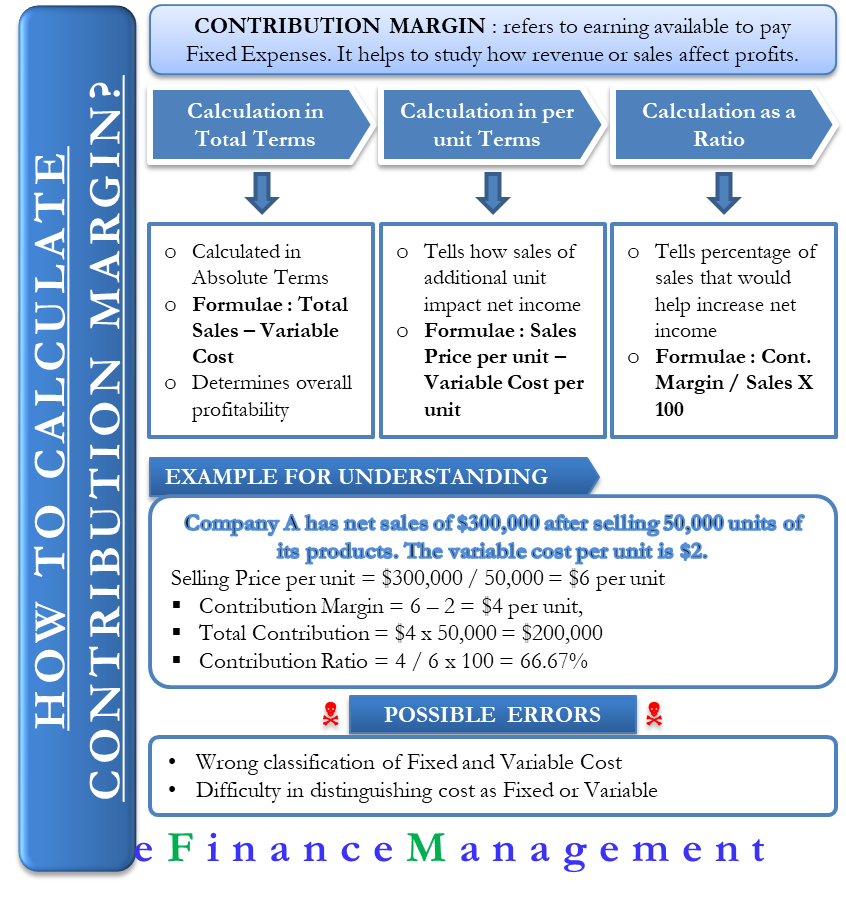 Calculating per unit of contribution margin tells how sales of additional unit impact the net income. We can calculate it by subtracting the sales price per unit from the variable costs per unit. For example, a smartphone sells for $1000 and the variable cost of each unit is $600. In this case, the contribution margin per unit is $400, or we can say selling each unit increase the net income by $400. We can also say that any increase in the selling price won’t affect the variable cost, and thus would lead to more profits only.

Lets’ understand the concept with the help of a formula. Suppose a machine sells for $1000, while its variable cost is $500. The contribution margin, in this case, is 50%.

To understand how the sales will affect the net income, all we need to do is multiply the margin ratio by sales amount. In the above example, we can say that $1000 sale increases the net income by $400.

Let us understand all three forms of contribution margin with the help of a simple example. Company A has net sales of $300,000 after selling 50,000 units of its products. The variable cost per unit is $2.

Error to Look for When you Calculate Contribution Margin

One common mistake that many make while calculating the contribution margin is that they wrongly classify the fixed and variable costs. Thus, to avoid such error and accurately calculate the ratio, it is imperative to have a clear understanding of what the company classifies as a fixed or variable cost.

Last updated on : October 5th, 2019
What’s your view on this? Share it in comments below.
Pin It Tweet