What is Altman Z-Score

The Altman Z-Score is a statistical measure used to predict the probability of a company going bankrupt. It is an important measure to gauge the creditworthiness of a company using data publicly available in the annual report of a company.

Use of Altman Z-Score?

As we are all aware, the fundamental idea to make higher profits in a stock market is “Buy Low – Sell High”. Which means, we need to buy a stock at its lowest possible value and sell when it reaches its highest possible value to make higher returns. Hence, it happens many times that a potential investor waits for the stock to go as low as possible before entering into it. Therefore, in a haste to buy a stock at its lowest value, one should not neglect its chances of going bankrupt. Hence, investors use the Z-score formula to check the creditworthiness of a company and decide for safer investments. During the big financial crisis in 2008, the Z-Score formula has helped Altman to predict the crisis beforehand. The formula is highly effective and has a reliability of 80-90% in predicting distressed companies in advance.

The Formula for Altman Z-score

The Z-Score formula is composed of a combination of a few financial ratios. Each ratio captures information on different aspects of the heath of the firm. The equation for Z-Score is the sum of all the ratios multiplied by pre-determined weights. The formula for publicly listed companies is: 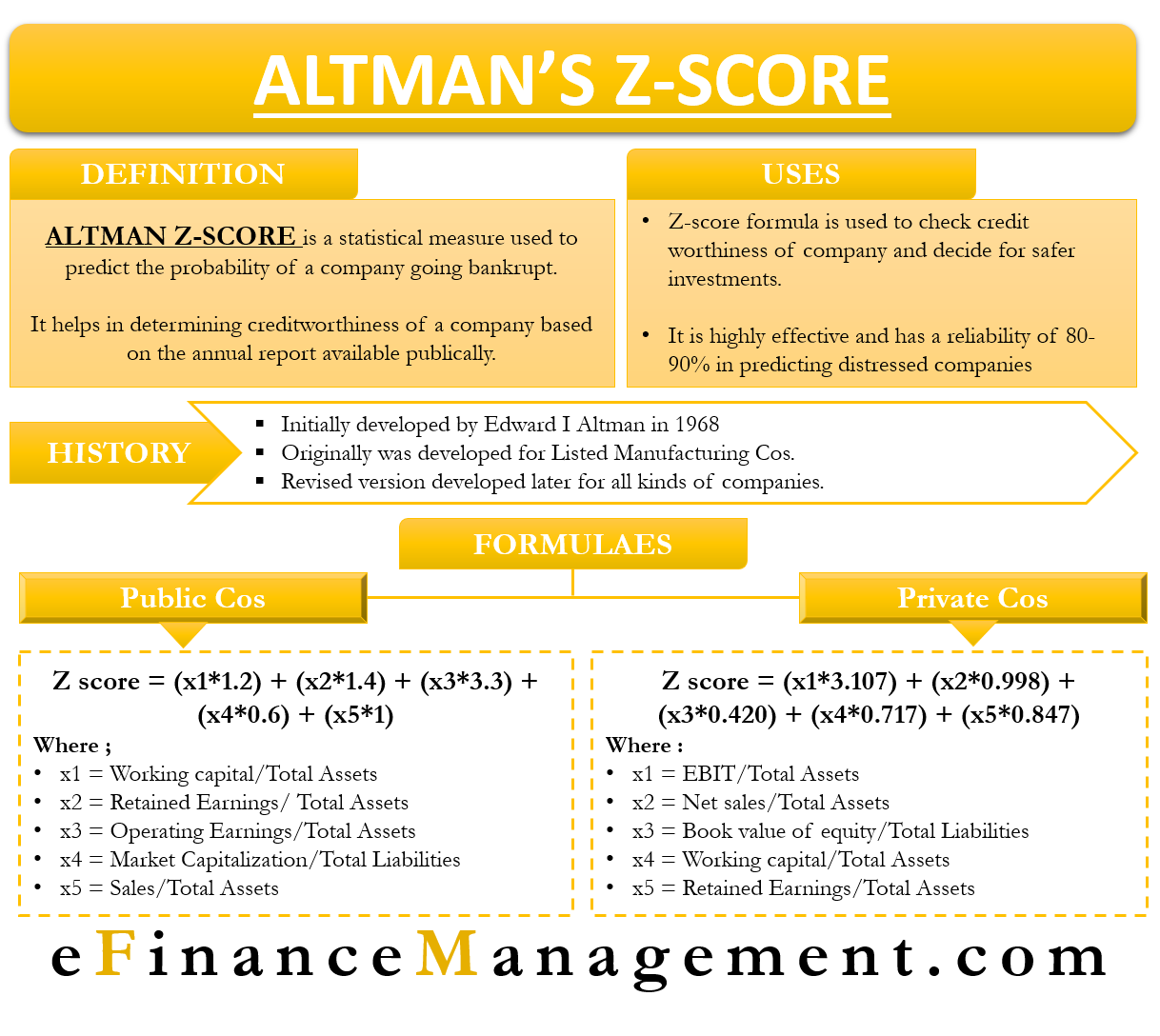 In general, lower the Z-score value, higher is the probability of a company going bankrupt.

A value of less than 1.81 means there are high chances for the company to file bankruptcy or high distress company

If it is between 1.81 and 2.99, the company has medium chances of going bankrupt or medium distress company

and a score higher than 2.99 is means the company is far from filing bankruptcy or low distress company.

The above score has proved to predict if a company is likely to bankrupt before one year with 95% accuracy and before two years with 83% accuracy.

If the score is less than 1.23: high chances for the company to file bankruptcy or high distress company

Between 1.23 and 2.9: Company has medium chances of going bankrupt or medium distress company

Higher than 2.9: Company is far from filing bankruptcy or low distress company

Last updated on : October 30th, 2019
What’s your view on this? Share it in comments below.