Comparative advantage refers to the ability of a country to produce particular goods or services at lower opportunity cost as compared to the others in the field. Due to differences in geographical situations, efficiency of labour, climate and natural resources, a country may have the ability to produce a commodity at a lower cost as compared to the other.

In such cases, every country specializes in producing the commodity in which its comparative productions cost is the least. Therefore, all the entities can mutually benefit from voluntary trade and cooperation. This economic law was recognized by a political economist, David Ricardo in his book, ‘Principles of Political Economy and Taxation’ in 1817.

After understanding the meaning of comparative advantage, let us have a look at the assumptions of this theory.

The following are the assumptions of the Ricardian doctrine of comparative advantage: 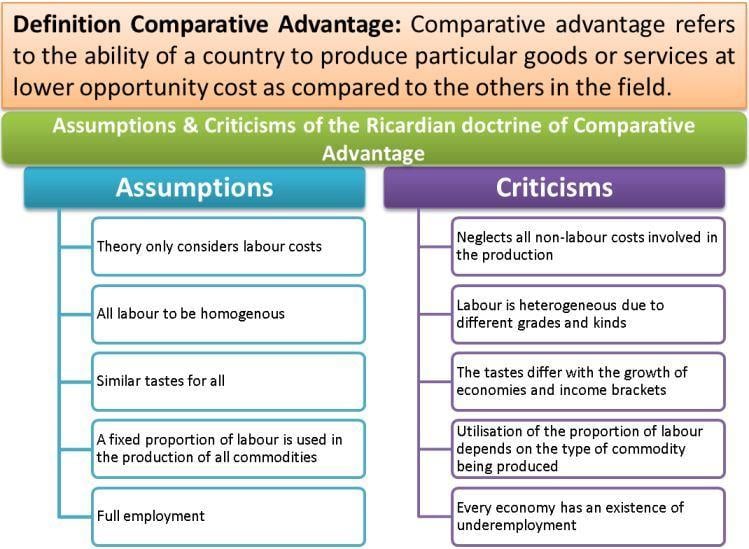 After knowing the assumptions of comparative advantage, let us also know the criticisms for the same.

The following are the criticisms of the Ricardian doctrine of comparative advantage:

Despite weaknesses, The Ricardian theory of comparative advantage has remained significant over the years. The basic structure of the theory still exists with a few refinements. It is believed that a nation that neglects this theory may have to pay a heavy price in terms of potential rate of growth and living standards.