What is Public Finance?

In simple layman terms, public finance is the study of finance related to government entities. It revolves around the role of government income and expenditure in the economy.

Prof. Dalton in his book Principles of Public Finance states that “Public Finance is concerned with income and expenditure of public authorities and with the adjustment of one to the other”

By this definition, we can understand that public finance deals with income and expenditure of government entity at any level be it central, state or local. However in the modern day context, public finance has a wider scope – it studies the impact of government policies on the economy.

The scope of Public Finance

Prof. Dalton classifies the scope of public finance into four areas as follows –

As the name suggests, public income refers to the income of the government. The government earns income in two ways – tax income and non-tax income. Tax income is easy to recognize, it’s the tax paid by people of the country in the form of income tax, sales tax, duties, etc. On the other hand non-tax income includes interest income from lending money to other countries, rent & income from government properties, donations from world organizations, etc.

This area studies methods of taxation, revenue classification, methods of increasing government revenue and its impact on the economy as a whole, etc.

Public expenditure is the money spent by government entities. Logically, the government is going to spend money on infrastructure, defense, education, healthcare, etc. for the growth and welfare of the country.

When public expenditure exceeds public income, the gap is filled by borrowing money from the public, or from other countries or world organizations such as The World Bank. These borrowed funds are public debt.

This area of public finance explains the burden of public debt, why it is necessary and its effect on the economy. It also suggests methods to manage public debt.

As the name suggests this area of public finance is all about the administration of all public finance i.e. public income, public expenditure, and public debt. Financial administration includes preparation, passing, and implementation of government budget and various government policies. It also studies the policy impact on the social-economic environment, inter-governmental relationships, foreign relationships, etc. 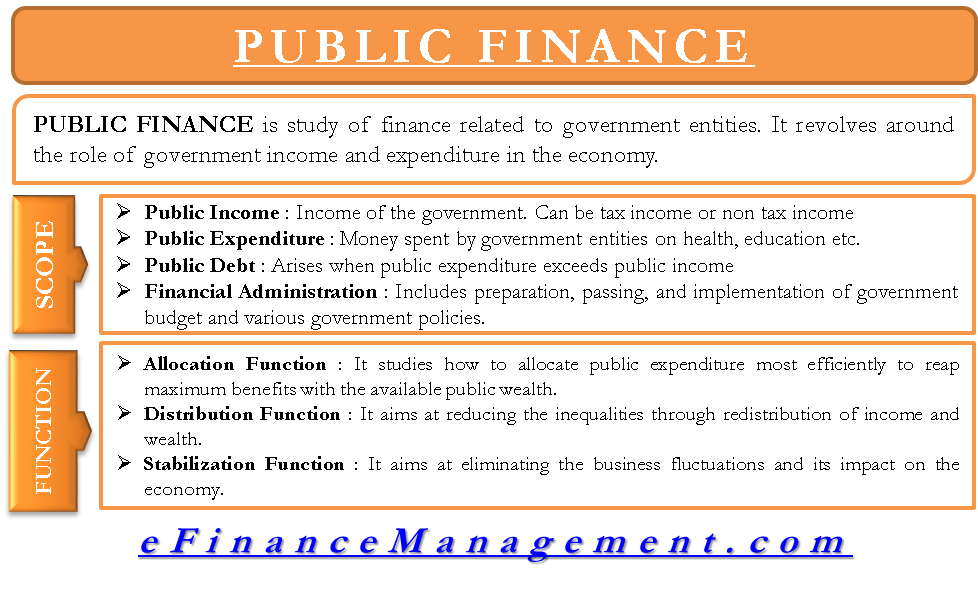 There are three main functions of public finance as follows –

The allocation function deals with the allocation of such public goods. The government has to perform various functions such as maintaining law and order, defense against foreign attacks, providing healthcare and education, building infrastructure, etc. The list is endless. The performance of these functions requires large scale expenditure, and it is important to allocate the expenditure efficiently. The allocation function studies how to allocate public expenditure most efficiently to reap maximum benefits with the available public wealth.

In public finance, primarily three measures are outlined to achieve this target –

Every economy goes through periods of booms and depression. It’s the most normal and common business cycles that lead to this scenario. However, these periods cause instability in the economy. The objective of the stabilization function is to eliminate or at least reduce these business fluctuations and its impact on the economy. Policies such as deficit budgeting during the time of depression and surplus budgeting during the time of boom helps achieve the required economic stability.

A lot of public finance professionals eventually go on to become professors and teach public finance in universities and colleges. Not only limited to teaching, but they also participate in university researches to improve understanding of the field and create new tools for efficient practical applications.1