Scenario Analysis is the process of calculating the value of a specific investment, or a certain group of investments, under a variety of scenarios i.e. future possibilities. In other words, we estimate expected cash flows and asset value under various scenarios, with the intent of getting a better sense of the effect of risk on value.

These scenarios may be very likely to occur or their occurrence might be doubtful, yet quite possible. A key point to consider here is that scenario analysis is not dependent on past results. Historic data mainly provides a framework within which we can conduct future scenario analysis.

Scenario analysis can be done for many reasons such as – 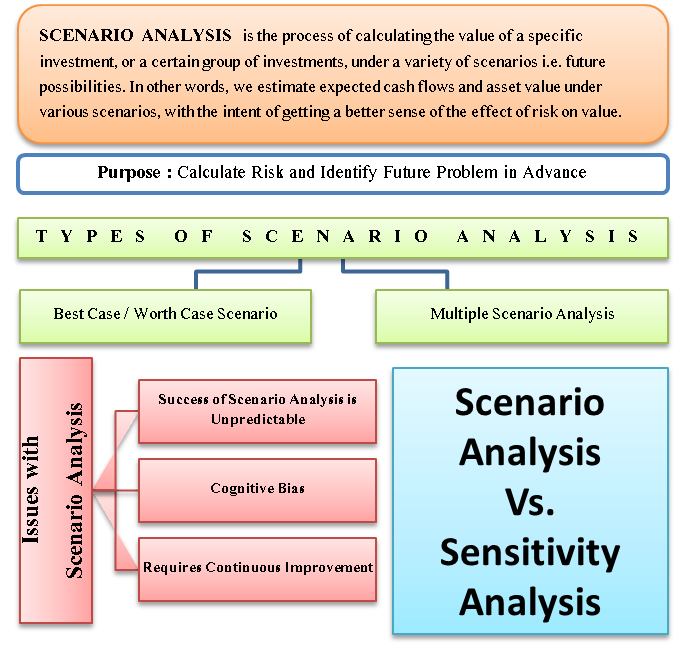 There are mainly two types of scenario analysis that are widespread & used by most executives, managers, and investors. Following are the two types:

Many times we realize that the actual outcome of an investment is much different than the one we have assumed. This is because we make assumptions and predict the outcomes based on our assumptions. But we never question whether our assumptions are right or wrong? Are there any other possibilities?

When we do best case/ worst case scenario analysis, we consider multiple assumptions. In the best case scenario, each input value is set to the best. For example, the economy & industry will grow at 6% (best growth rate), we assume best projections and so on. Then we determine an outcome. This brings us to the situation where we say “if every factor works out to the best, we will have X amount of returns”

On the other hand, when we take worst case scenario, each input value is set to the worse and we can conclude that “if every factor works out to the worse, we will have Y amount of returns”

Success of Scenario Analysis is Unpredictable

We might do a proper detailed scenario analysis, get facts right, make clear assumptions about all the scenarios, but we can never know if the scenario will play out exactly as we expect it to. For example, suppose a manager of a chocolate manufacturing company might assume that in the year 2017 if world chocolate consumers increase by 20% then his sale would rise by 10%. He came to this conclusion after following step by step structured approach to scenario analysis. But when the year ended he realized that the world chocolate consumers increased by 22% but his sales increased only by 5%. After further investigation, he found that the increased consumers preferred white chocolate, while he manufactured milk chocolate. By this example, we can conclude that while making a scenario we may consider some factors, but we can’t possibly consider all factors as thousands of factors affect a situation.

There are times when decision-makers take multiple scenarios – say best, average & worst. This is a dangerous situation because as human nature we consider that occurrence of average scenario is the most likely. Thus we are biased to make decisions based on average scenarios. The human brain is wired in a certain way & its perceptions affect all decision making.

Scenarios require continuous revision, refinement & control by an expert or a specialized team. In this fast growing times, a scenario considered today may take a very form in next 3-month period. One must periodically update the scenario analysis & make wise decisions to get maximum benefit out of scenario analysis.

Many people confuse scenario analysis with sensitivity analysis. Even though the base of both the concepts is similar i.e. predicting outcomes given certain situations, they differ a lot. Sensitivity analysis is used to understand the effect of a set of independent variables on some dependent variable. On the other hand, scenario analysis would require the financial analyst to describe a specific scenario in detail. Let us understand both with an example.

Scenario analysis example – What would be the sales growth of Apple iPhones if GDP growth rate in the USA will be between 1% & 2% (low), 2% and 3% (average), more than 3% (high). After specifying the details of the scenario, the analyst would then have to specify all the variables, so that they align with the scenario. The result is a very comprehensive picture of the future (a discrete scenario).

Sensitivity analysis example – What will be the effect of Apple Inc.’s net working capital (independent variable) on its net profit margin (dependent variable). The analysis will involve all the variables that have an impact on the company’s profit margin such as the cost of goods sold, workers’ wages and managers’ wages, etc. The analysis will isolate each of these fixed and variable costs and record all the possible outcomes.1,2