Meaning Of Ocean Bill of Lading

An ocean bill of lading is a contract between the shipper and the ocean carrier. The document acts as a carrier receipt to the shipper. The bill contains every detail of goods that are being transported. This document is submitted to shipper while picking up goods. The shipper later gives it to the receiver on the delivery of goods. Visit “Bill of Lading and its Types” to learn more about the concept.

Is Ocean Bill of Lading Negotiable or Non-Negotiable?

Ocean bill of lading is of many types. The most commonly used are as follows. 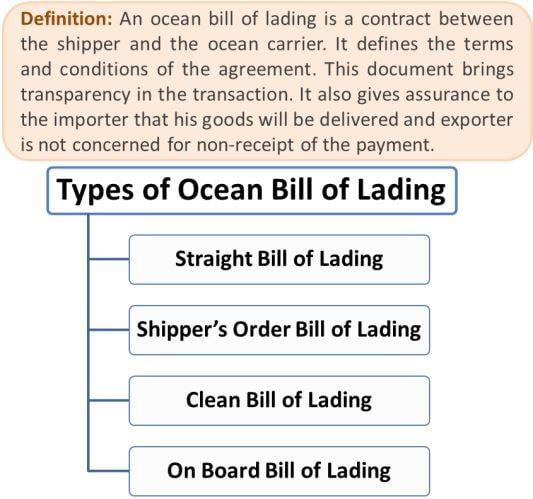 Types of Ocean Bill of Lading

It is a non-negotiable instrument. In the straight bill of lading, only the person whose name appears on the bill can claim the goods. This type of bill is used mostly when the exporter is not concerned about the receipt of payment from the importer upon receiving the goods.

It is a negotiable instrument. The shipper’s order bill of lading consists of conditions while delivering the goods. The conditions may include fulfilling the terms of the letter of credit before receiving the goods.

On Board Bill of Lading

The master of the vessel signs this bill of lading. It is issued when the cargo is placed abroad in a vessel.

An ocean bill of lading is a contract between the shipper and the carrier. It defines the terms and conditions of the agreement. This document brings transparency in the transaction. It also gives assurance to the importer that his goods will be delivered and exporter is not concerned for non-receipt of the payment. In some cases, if there is default in payment the banks are authorized to take control of the goods. Thus, ocean bill of lading is a boon in international transactions.1–4