Investment Banker Salary is probably the most important question in the mind of aspiring investment bankers. However, this is also an area where aspirants get fooled by wrong portrayal and inflated salary figures.

Let’s understand that if you want to become an investment banker, how much money you will make.

Salary of an investment banker can be divided into four components as follows:

This means whether you are a great performer or a lousy one, you will be getting the base salary as long as you are hired as an investment banker.

From the table, it may seem that investment banking salaries vary too much from one location to another, but that is not the case. Let’s understand this by taking an example of associate salary in New York vs. associate salary in Mumbai. If we consider an associate’s base salary in New York, it is US$ 120K per year, if converted into Indian Rupees the salary comes to ₹8.4M per year which is much higher than the ₹1.2M per year that an associate is paid in Mumbai. But consider the fact that the rent of a small apartment in New York will cost approx. US$ 2k (₹140K) per month, whereas a similar apartment in Mumbai will cost around ₹30k per month (which is less than one-third of its counterpart in New York).

Thus we can conclude that taking into account factors such as cost of living, economy, inflation, etc. investment banker’s salaries across the globe is similar at similar designation. 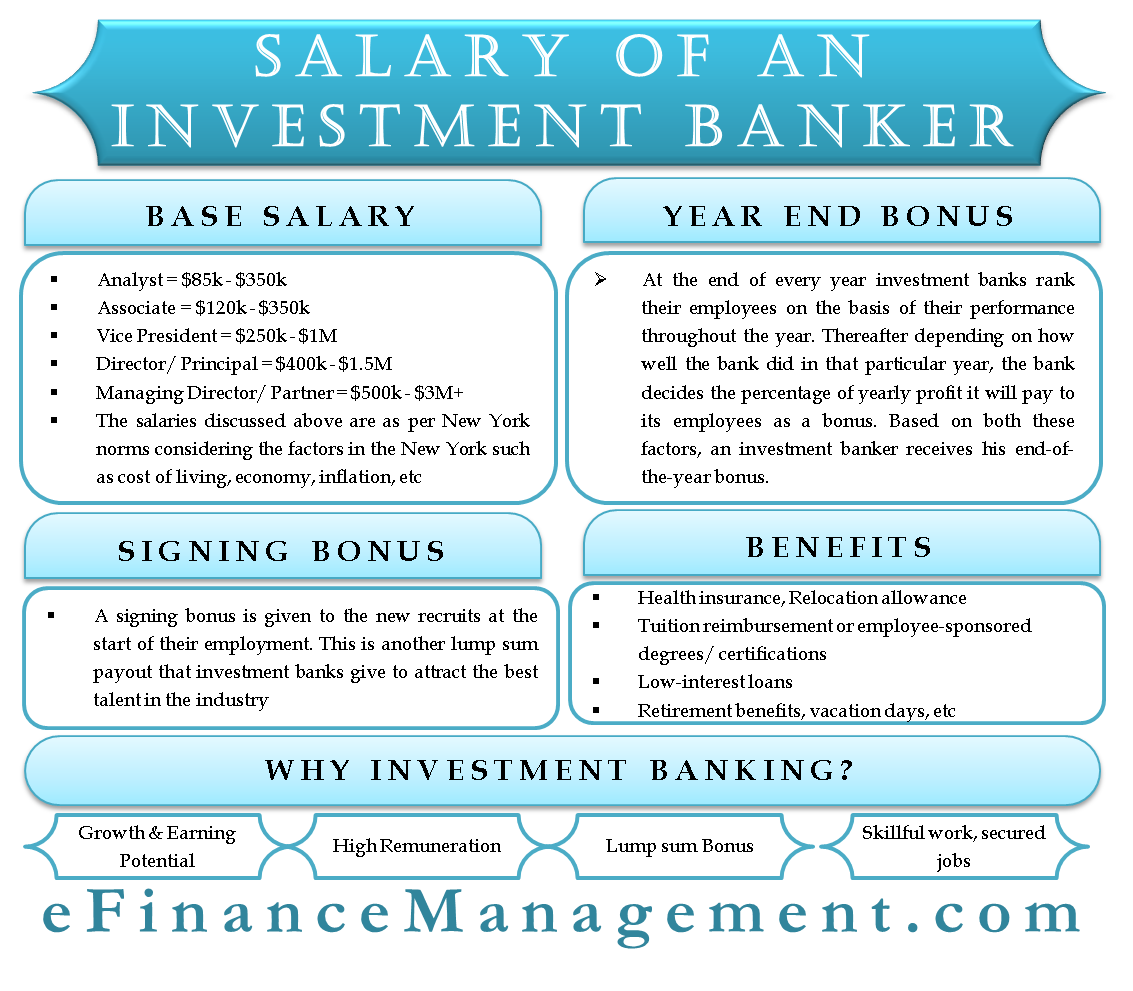 This is the second component of an investment banker’s salary. At the end of every year investment banks rank their employees on the basis of their performance throughout the year. Thereafter depending on how well the bank did in that particular year, the bank decides the percentage of yearly profit it will pay to its employees as a bonus. Based on both these factors, an investment banker receives his end-of-the-year bonus.

Now, this is the component where the magic happens. An investment banker’s end-of-the-year bonus can range from anywhere between 70% and 200%+ of their base salary. So a star performer can get double his salary as a bonus payout. Let’s take an example, suppose a second-year associate in New York has the yearly base pay of $200k. He is a top performer at his bank, so the bank decides to give him a 100% bonus on his base salary. Therefore, his year-end bonus would be $200. Which makes his salary $400k, that is approximately half a million dollars!

These are the figures that newspapers and social media talk about when they publish articles with headlines such as “28-year-old investment banker makes half a million dollar a year!” Such information is actually misleading. Most people read such articles and decide to try their luck at becoming rich investment bankers. What they don’t realize is that this 28-year-old dude is a star performer in a job where 100% of the people work at least 90 hours a week.

This is another lump sum payout that investment banks give to attract the best talent in the industry. A signing bonus is given to the new recruits at the start of their employment. In the USA, a fresh graduate starting out as an analyst get signing bonus anywhere between $5k and $15k. An associate gets anywhere from $15k up to $30k+. The purpose of this bonus is not only to attract but also to retain top talent.

Different investment banks provide different benefits to their employees. These benefits include –

Now all this is not hard cash so it might not look so good in the first go, but let’s consider a situation – an MBA degree from NYU Stern comes at a sticker price of approx. US$ 120,000 and the tuition is similar for all the Ivy League Schools. Given the situation, the tuition reimbursement benefit would be very appealing to fresh graduates and MBA pass outs.

The salary of all investment bankers includes these four components, regardless of banker’s designation or function. As the bankers move up the ladder, they get additional benefits such as stock options, part of the profit and deferred compensation. However, these benefits are extremely subjective and differ from an investment banker’s performance in one deal to another.

Do Investment Bankers make a Lot of Money?

Then What is the Fuss all about?

So the bottom line here is that investment banking is a great career option, you might make a lot of money too, but you have to be good at it and you must be committed and prepared to put in 100 hour work weeks on regular basis, keep yourself updated and really drill in the job.1–3

Last updated on : November 3rd, 2018
What’s your view on this? Share it in comments below.
Pin It Tweet