Supermajority, as the word suggests, is the requirement of more than a simple majority (of 51% or more). In the financial world, this word comes into use as an anti-merger or anti-acquisition move. Basically, it is an amendment in the company’s charter, which mandates the requirement of a vast majority, usually 67% to 90%, to approve crucial matters, such as a merger or acquisition.

Another word for it is “supermajority amendment.” Vote for supermajorities can take place at an extraordinary general meeting or the company’s AGM (annual general meeting). However, its use hinges on the nature and urgency of the proposal.

Though such a provision helps to ensure the independent survival of a company, it may restrict the powers of a board of directors’ even when a company is facing a friendly takeover. Or, we can say, its use makes it much more challenging to arrive at a consensus. On the other hand, a decision that enjoys the backing of supermajority is acceptable to almost all, and thus, is much more sustainable.

Usually, a provision for a supermajority for certain specific decisions is required by corporation bylaws or condo association bylaws. Many also view such a provision as a defensive tactic against hostile takeovers.

The use of supermajority dates back to the classical Rome era, where juries used it to conclude. Later, the concept was adopted by the medieval church for its election. In 1996, Pope John Paul II made efforts to change the requirement, but the rule to elect a pope with supermajority still exists.

Usually, the decisions that have the potential to significantly impact the future of an organization falls under the supermajority provision. Following are some of the cases, where more than a simple majority is needed:

How Much Majority Needed?

Usually, supermajority requires the backing of two-third members. But, a company may mandate it to be as much as 90%. A simple majority is over 50%. If any action is decided with a simple majority, it could mean that almost half of the shareholders do not agree with the decision. Thus, to avoid such issues, the companies go for a supermajority. 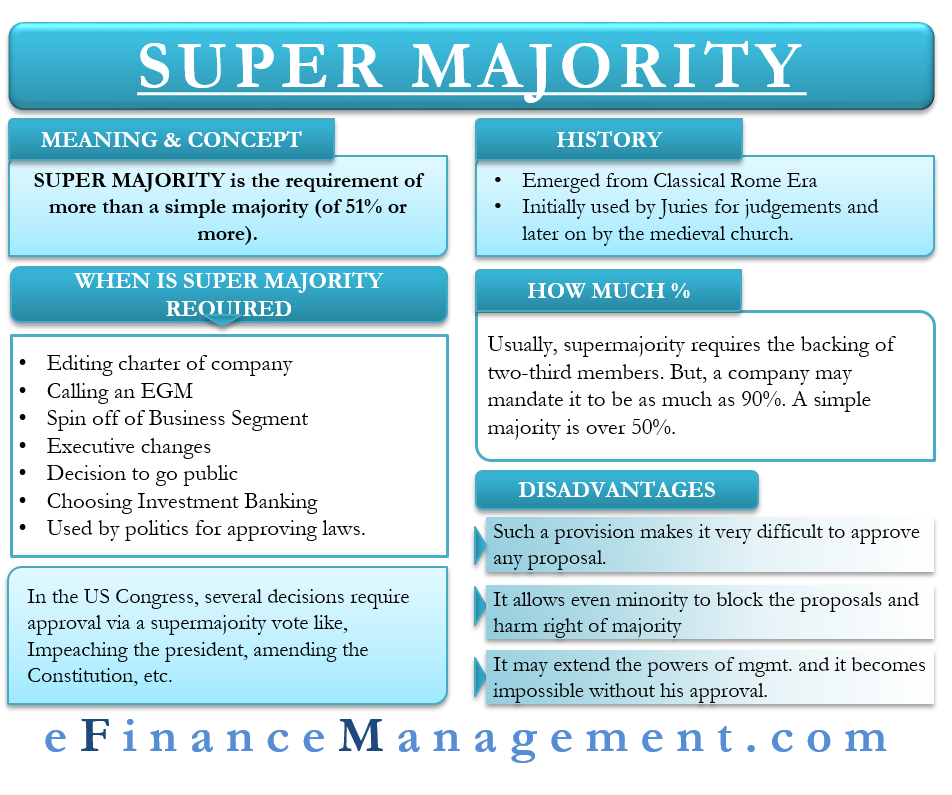 A couple of years back, Duke Energy said that its sponsored proposal failed to win the required 80% votes. The proposal that was up for a vote was for the abolition of the supermajority requirements in Duke’s Restated Certificate of Incorporation.

Another example: Electric vehicle maker, Tesla also has a provision for supermajorities for certain crucial matters. The company’s charter requires at least two-thirds votes to approve certain proposals. Last year in June, the company voted to cancel the supermajority provision, but the proposal failed to win the approval.

Though supermajorities make sure that a decision enjoys the backing of most shareholders and is acceptable to all, it has a few drawbacks as well:

Supermajority Vote in US Congress

In the US Congress, several decisions require approval via a supermajority vote. Following are some of the actions that require such voting: