Bank rate and Repo rate are both parts of the interest rate policy of the country’s central bank. Both these rates come into use during transactions between a country’s central bank and commercial banks. The central bank use both repo rate and bank rate to regulate the supply of currency in the economy. However, central banks use the repo rate more frequently in comparison to the bank rate. Though both terms serve a similar purpose and involve the same parties, they are very different from each other. To better understand the meaning, importance, and usage of both these terms, we need to see the differences between bank rate vs repo rate.

Bank Rate vs Repo Rate – What They Are

Following are the differences between bank rate vs repo rate: 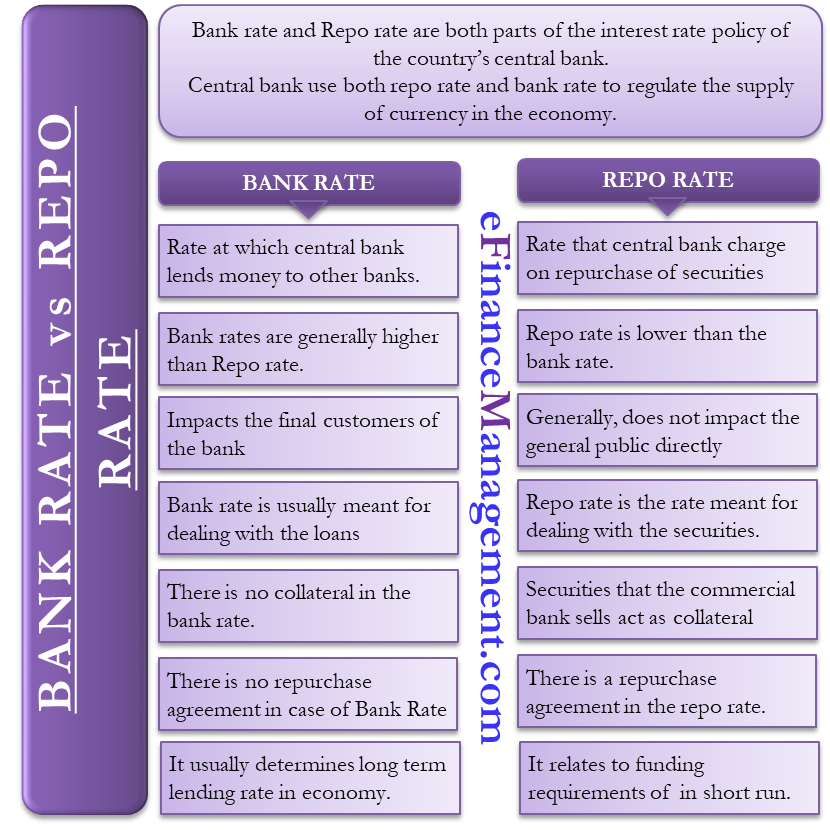 In the case of repo rate, the underlying security is government security. Moreover, the securities that the commercial bank sells act as collateral as these remain with the central bank until commercial bank repurchase it. On the other hand, there is no collateral in the bank rate.

There is a repurchase agreement in the repo rate. No such agreement is in the bank rate.

Impact on the Economy

Repo rate relates to the funding requirements of the commercial banks in the short run. Therefore, an increase in the repo rate generally helps in reducing the liquidity in the economy. It has no direct bearing on the customers, who are looking to avail of the loan from the commercial banks. However, an increase or decrease in the bank rate directly affects the general public. Bank rate usually determines the long term lending rate in an economy.

Despite the differences between bank rate vs repo rate, the central bank, on paper, use both to control the money supply and inflation in an economy. However, the bank rate is not much in use now as banks hardly borrow from the central bank. They only approach the central bank when they are in dire need of funds.1,2

Last updated on : February 7th, 2020
What’s your view on this? Share it in comments below.
Pin It Tweet