Home
Financial Management
GDP vs GNP – All You Need To Know

Gross Domestic Product (GDP) and Gross National Product (GNP) are important measures that define the health of the economy. GDP defines the total value of the goods and services that a country produces. On the other hand, GNP defines the total value of goods and services that the residents of a country produce irrespective of where they reside. Even though both terms convey similar things, they are very different. However, people often use them interchangeably when talking about the economic health of a country. To better understand what both these terms mean and convey, we must know the differences between GDP vs GNP.

Following are the differences between GDP vs GNP:

The core concept of GDP revolves around the location. For GNP, it is basically the citizenship. Similarly, GDP talks about productivity at a country scale, while GNP includes productivity at the international level.

GDP includes all economic activities inside the country by nationals and foreigners. GNP, on the other hand, includes production and services by citizens of a country.

Following is the formula for calculating Gross Domestic Product:

Since Gross National Product takes into account the value of economic activities of those who are not residents of the country as well, formula for the same is:

For instance, if a US company is manufacturing automobiles in the United Kingdom, the production will add to the UK GDP. But, if the US firm takes the profit and sends to the shareholders in the US, then the amount will come in the US GNP as United Kingdom residents won’t benefit from this profit.

Gross domestic product helps us to understand the overall economic health of the country. On the other hand, economists use gross national product to know how the nationals of the country are doing and what their economic status is. Governments and economists use the GNP to gauge the contribution by the residents to the economy. 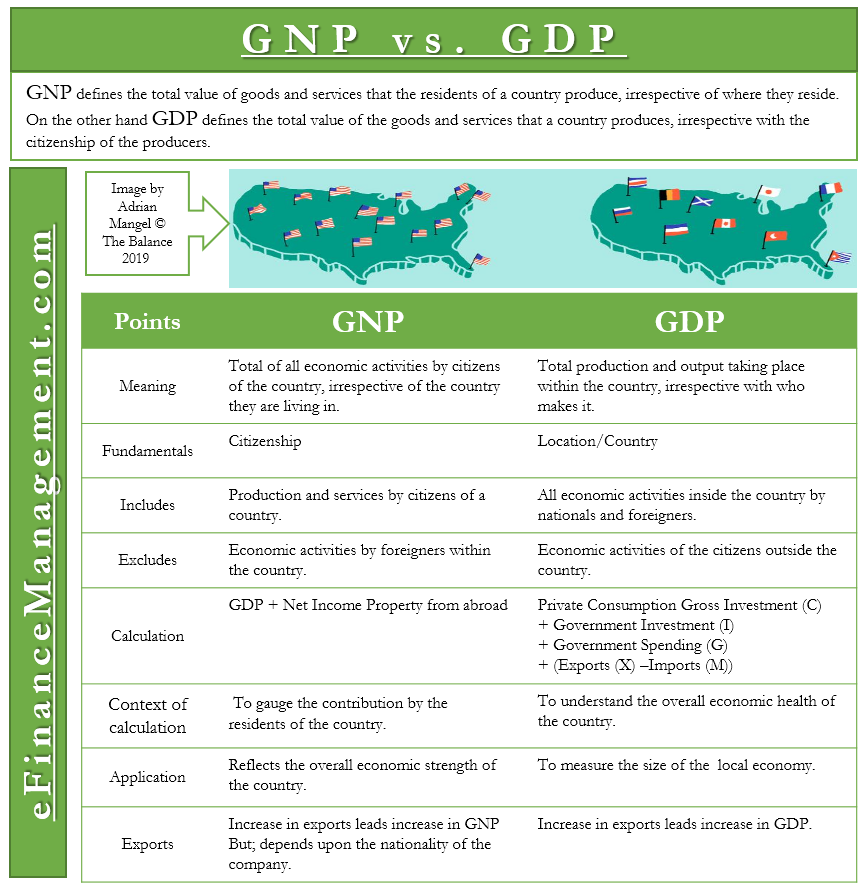 Difference in Treatment of Certain Items

There are different situations or items that are treated very differently in the calculation of Gross Domestic Product and Gross National Product. Let’s review each of such situations:

Domestic residents owning company and producing goods for global consumption – assume a case where a mobile manufacturing company produces smartphones for global consumption and remits the profits to the countries that have liberal corporate tax policies. Gross national product, in this case, will include the economic activity or remittance of profit to other countries. GDP, on the other hand, being the measure of the economic output of the nation’s economy does not take into account the international activity, including the money remitted to other countries.

Net income from foreign investment – while calculating gross national product, net income receipts from the international investments by the residents are taken into account. Gross domestic product, on the other hand, does not include this income.

GDP helps to measure the size of the local economy, while GNP reflects the overall economic strength of the country. One can use these measures to study the average purchasing power, distribution of wealth and more.

Usually, an increase in exports leads to an increase in both GDP and GNP. Sometimes, a jump in export may not increase GNP. This, however, depends on the nationality of the company. For instance, if a company, where Google holds a 100% stake, exports services worth $5 billion out of India. This $5 billion figure will come in the GDP, but not in the GNP as the export is by a US company.

Gross domestic product holds more significance in comparison to the gross national product. The former metric gives a holistic picture of the total value of all economic activities in an economy. However, there is a criticism against GDP that it does not tell economic well being of society such as the environmental impact of growth, infant mortality rates and more.1,2

Last updated on : January 31st, 2020
What’s your view on this? Share it in comments below.
Pin It Tweet