Absolute advantage and comparative advantage are two very important terms used in economics. Both terms usually come in use when talking about International Trade. Both these are simple terms to define the capacity of a business or a country as a whole to produce or manufacture a good absolutely on their own or chose to allocate resources to the activity that is of maximum benefit to the economy. Though people often use both the terms to convey the same meaning, they are very different from each other. Thus, to understand the real meaning and use of both these terms, we need to know the differences between Absolute Advantage vs Comparative Advantage.

Before we detail the differences, let us see what both terms mean:

Absolute advantage is a scenario where a business or a country is wholly sufficient to continuously produce a higher quality product at better rates compared to others. A country might have an absolute advantage in producing some goods due to its natural resources, climate conditions and so on. For example, extracting oil in Saudi Arabia is easier due to its abundance.

Comparative advantage, on the other hand, means a business or the economy takes into consideration the opportunity cost while allocating limited resources to the production. Countries mostly consider comparative advantage to better allocate resources to the activities they can perform within the country more efficiently and at a lower cost. It is basically the ability of a company or country to make better goods in all respect than others.

We can say that absolute advantage talks about the productivity of a nation and their absolute strength and command over the production of something. Comparative advantage, on the other hand, is all about defining the opportunity cost and enabling an economy to make better decisions.

Following are the differences between absolute advantage vs comparative advantage:

David Ricardo was the first economist to develop the theory of comparative advantage. The theory focuses on the differences in relative opportunity costs between different countries regarding the production of commodities. Adam Smith, the father of modern economics, came up with the theory of absolute advantage in his 1776 publication – The Wealth of Nations.

As with all the theories, both comparative and absolute advantage is also based on certain assumptions. Some of the main assumptions of both theories are: 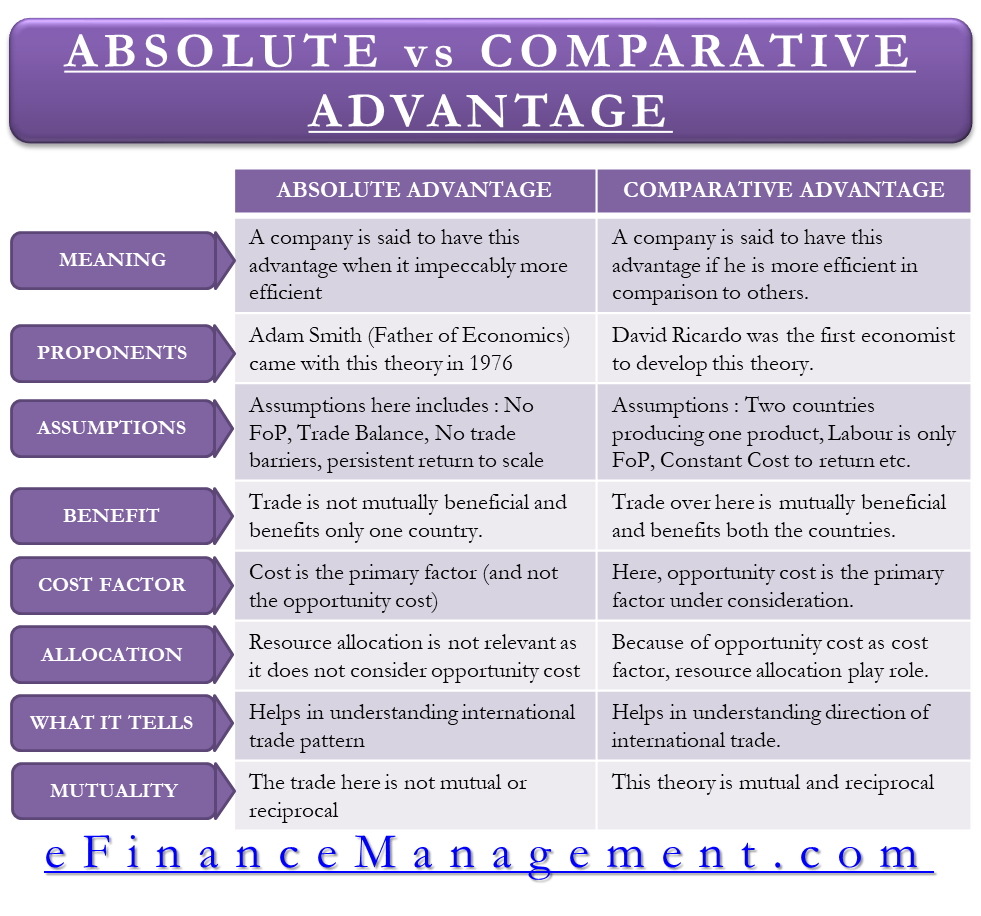 Cost as a Factor

In comparative advantage, opportunity cost comes into play because economies need to decide the best way to utilize their resources. Out of various alternatives, the country chooses the one that is in-line with the resources and also the cost. For instance, assume Japan is better at producing electric cars compared to racing cars. Now, the country would focus on the former and import racing cars. Cost is the primary factor in absolute advantage (not the opportunity cost).

What does it Tell?

Absolute Advantage vs Comparative Advantage: Which is Better?

While the absolute advantage is almost non-existent in a real-world, comparative advantage ensures that countries can always engage in trades and play on their strength.1–3

Last updated on : January 9th, 2020
What’s your view on this? Share it in comments below.
Pin It Tweet