A trademark is a unique characterization given to a product in order to distinguish it from other similar or competitive products. A trademark can take the form of a logo, design, symbol or words which establish the uniqueness of that product. Additionally, trademarks are also a declaration of a product belonging exclusively to a specific organization.  This enables the trademark owners to prevent their competitors from mooching off similar designs or passing off dubious products under their brand name.

Going into the legality of the term, a trademark is essentially a form of intellectual property. In order to have an enforceable trademark protection, one must register it as per the laws and regulations of their home country. In the United States, the USPTO (The United States Patent &Trademark Office) is the issuing agency for trademarks. They remain valid for a period of 10 years from the date of registration, with an option for renewal for additional 10 years.

Why must businesses secure Trademarks?

Registration of a trademark with the USPTO  gives rise to exclusive legal rights and a higher degree of protection. Only a registered trademark owner can move to sue or recover statutory damages in cases of potential infringement. Registration indicates a clear-cut record and undisputed ownership in the eyes of federal court. This makes it easier to get a favorable decision in event of challenge to authenticity.

Trademarks are also an effective branding tool enabling organizations to set themselves apart from competitors. With the use of creative and appealing designs for trademarks organizations always seek to make their presence unforgettable and inviting for customers. After all, the bling and attractiveness is always the first thing which makes a customer choose one product over another.

The Giffen Goods effect dictating how prestige and prides guides customers in making buying choices can also be seen extending to trademarks. Several luxury brands have recognized this and print their trademarks not only on billboards and infrastructure but also extensively on their products. For instance, Louis Vuitton, Prada and Chanel.

Creation of an Asset

A registered trademark gives rise to an intangible asset in the form of an Intellectual Property. A definite value can be assigned to it as well as  can recorded on the balance sheet. Moreover, additional income can be generated by selling, assignment or franchising of the rights.

Once registered, trademark owners are entitled to use the ® symbol along with their logo on every product, service or elsewhere. It conveys conviction and confidence of the organization in their product and also serves to let the competitors know of the seriousness of intention and readiness to litigate in case any attempt to plagiarize is sensed. Additionally, registration also creates an obligation on the USPTO to check all future applications for similarity and decline registration to such applicants. 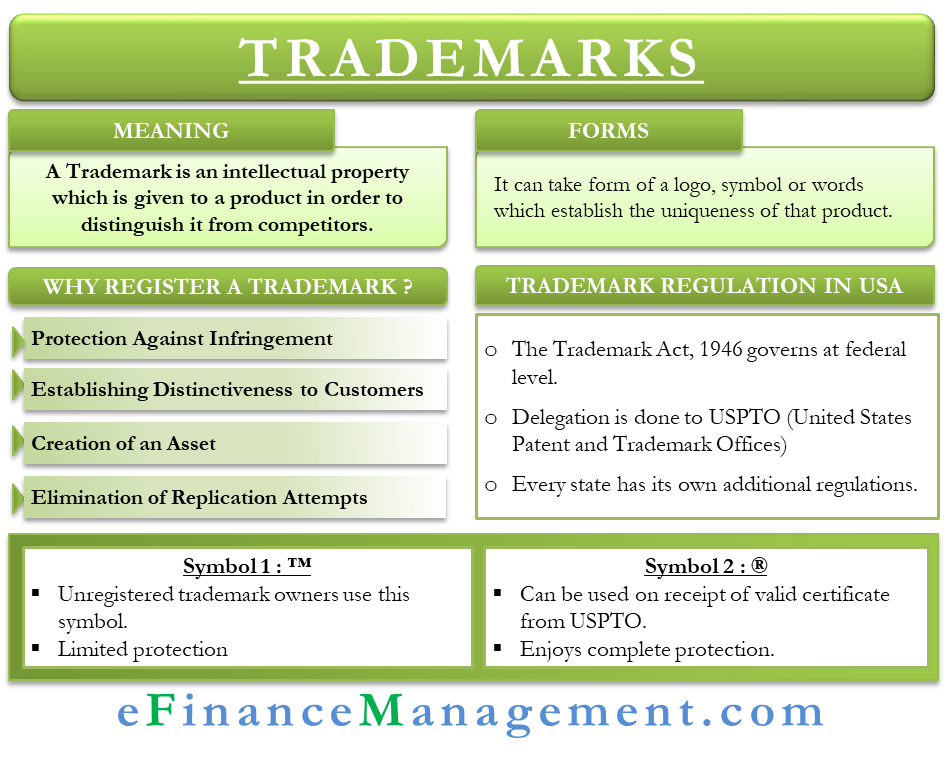 Some Creative Trademarks and Stories behind them

The online retail giant has a seemingly plain logo on the first glance. The name “Amazon” taken after the amazon forests seeks to indicate the abundance of the spread they offer. The same ideology seems to have been applied in their logo, where upon careful inspection, the yellow underline actually looks like an arrow pointing from A to Z. Thus, wittingly pointing out their vastness in scope. And hey, it also looks like a smile 😊 That doesn’t hurt either.

Here is an example of a trademark so iconic, the brand name does not even need to be mentioned. Contrary to popular notion, this logo is not a “check mark” but has a much more deeper meaning. Nike is the Greek goddess of victory. The designer intended to represent the “swoosh” as the goddess’s wings thus embodying movement and speed. Unaware of the monumental status her work would achieve, the designer was paid only $35 at the time!

The apple logo is touted  to be one of the most valuable logs in the world with its trademark worth a whopping $29.5 billion! There are several theories as to why specifically this fruit was chosen to be the lucky one. But all stories were quelled when Mr. Janoff, the original creator of this logo, explained  the Apple was chosen based on Steve Job’s preference who worked in an apple orchard as a boy. As to the bite on the Apple, it was merely included for scale, so that a small apple logo does not look like a cherry!

This list cannot be complete without the FedEx trademark, the recipient of over 40 design awards for its subtle yet sharp branding. FedEx is the syllabic abbreviation for its original name Federal Express. As is widely known, it is a global logistics company taking pride in its super-fast and precise deliveries. This is very cleverly incorporated as an arrowhead found between the orange “E” & “X”, thus indicating the shipping of goods from one place to another.

Trademarks Regulations in The United States

Every state in turn has its own set of additional regulations complimenting the federal law.

It is worthwhile to note the two symbols entailing a trademark and the differences between the two:

Unregistered trademark owners use this symbol. It comes into force automatically on use of a symbol or logo in the course of business. However, this provides very limited legal protection and is difficult to enforce or prove precedence in case of infringement.

Once the USPTO has granted a valid certificate of registration for the trademark, this symbol can be used. Such trademarks enjoy complete protection and enforcement rights. They are also almost impossible to trespass.

Last updated on : January 6th, 2020
What’s your view on this? Share it in comments below.
Pin It Tweet