Game Theory is primarily a mathematical framework but has found applications in many fields ranging from social sciences to the biological sciences. This theory analyzes the decision making of a player based on how he or she expects other players to make a decision. In other words, we can say that it helps in determining optimal rational choices given a set of circumstances.

For instance, one can easily apply this theory to come up with the most likely outcome if there are two or more players, and the payouts are known. Pioneers of this theory are mathematicians John von Neumann and John Nash, and Oskar Morgenstern, an economist.

Before we move forward with the Game Theory, let us see an example to get a better understanding of the theory.

The best example to understand game theory is the prisoner’s dilemma.  Under this ideal hypothetical situation, two criminals arrested for robbing a bank. The police, however, do not have any solid proof against them. But, to get their confession, both the prisoners put in separate cells. There is no way the two can talk with each other. Both prisoners get four options to choose from:

Of the four choices, the best option for both is not to confess (option 4). But, since neither of the two is aware of what the other will do, it creates uncertainty. Thus, as they are not sure if the other will confess, both will likely admit ensuring that they get the lowest prison sentence. Or, we can say that both the prisoners will make a decision that is best for each, but not best for them together.

The two most common types of game theories are cooperative and non-cooperative. The collaborative game theory talks of how groups or coalitions would interact or behave when the payoffs are known. The game theory helps to explain how (or the reason for) groups created, and how they distribute the payoff among the members within the group. In this, players benefit the maximum by cooperating. Moreover, players have nothing to gain by cheating. Cheating will result in the worst outcome. For example, driving on the right side of the road is suitable for all drivers. 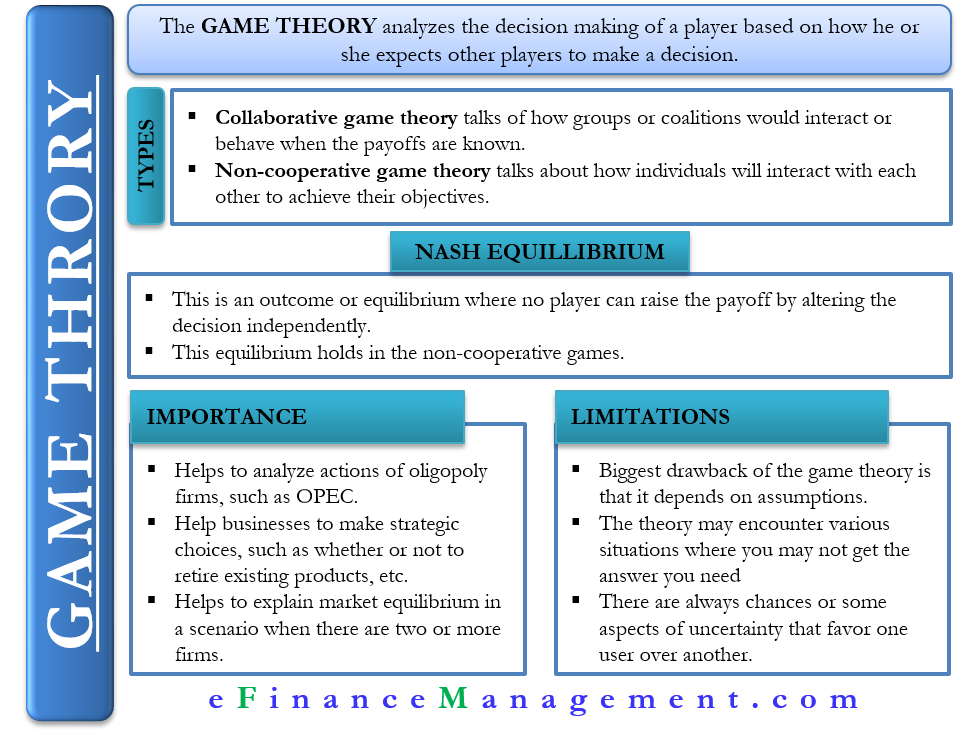 As per mathematician John Nash, this is an outcome or equilibrium where no player can raise the payoff by altering the decision independently. This equilibrium holds in the non-cooperative games.

The movie ‘A Beautiful Mind’ is based on Nash’s life only. As per the film, the mathematician got the idea of the theory by observing all his friends try to hit on the most beautiful girl. Seeing this, he decided to hit on the second or the third most beautiful woman to improve his chances.

Nash’s equilibrium shows that one can reach desirable outcomes (economic, political, or social) without entering into any contracts.

As said above, game theory has practical applications in several fields. Thus, it helps with:

Following are the limitations of the game theory:

The game theory has applications in numerous fields, be it computer science, biology, philosophy, and more. Economists and strategists always refer to this theory to come up with a better product, policy, and a better social or economic environment. Even in our lives, we are always in a game where our actions and decisions depend on the activities, decisions, and feelings of others. 1–3

Last updated on : April 30th, 2020
What’s your view on this? Share it in comments below.
Pin It Tweet