The basis of modern civilization is the economy of buying and selling. Since the time money came into use, there have been three methods by which a sale can take place. The first and foremost is that the seller sets a retail price and the buyer pays for it, this is simply a take-it or a leave-it offer. The second method is when buyers get to bargain. The seller has set a price but it isn’t as inflexible. The buyer and seller can haggle and reach another price point different than the original one. Finally, there is a third method that is our topic of discussion in this article. This method is called an auction.

An auction is a method where many prospective buyers compete for an opportunity to purchase an item. The buyers bid for the item, either simultaneously or over an extended period of time. There are many types of auctions such as English auctions, Dutch auctions, First Price Sealed Bid auctions, Vickrey auctions, etc. In today’s article, we will discuss English auctions in detail. 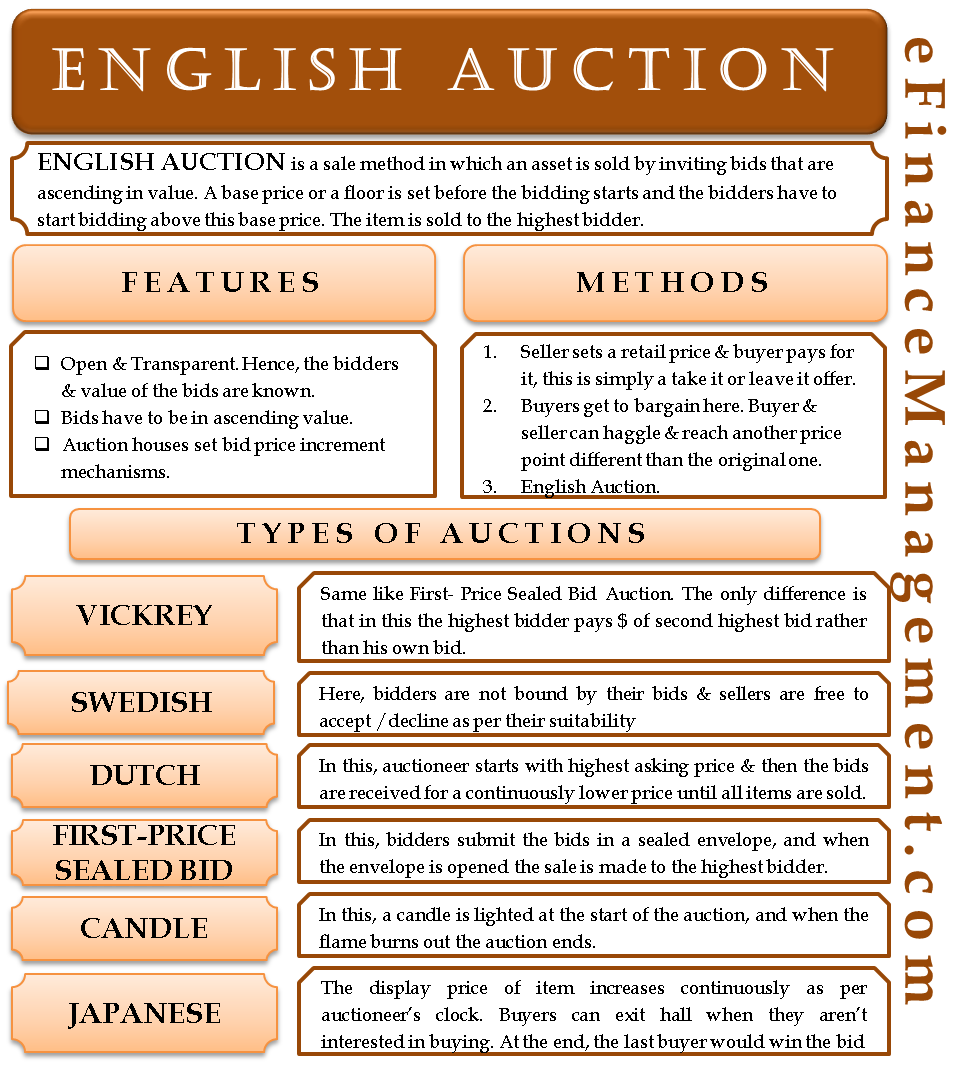 Example of an English Auction

There is an auction for Tiffany Vintage Jewelry at a famous auction house in London. From politicians, business tycoons, film stars and who’s who of the world has turned up for the auction. The auction starts and the first piece on sale is a vintage ruby and diamond choker. The piece is bought out on display in a glass box on the stage. The auctioneer takes the dais and talks about the choker, its history, its craftsmanship, the studded gems, and diamonds, etc.

Following is the conversation in the auction room –

Auctioneer – “The first item on sale today is this intricately carved invaluable vintage choker. Its opening bid is set at US$ 500,000.00, and you can start bidding above this value. What am I offered for this? I invite your bids”

Bidder-3 (his wife poked him to bid, he would rather buy the lamp that’s going on sale later in the auction) – “One million dollars”

Bidder-2 (she wants the choker. Period.) – “One million and two hundred thousand”

Auctioneer (by now sounding extremely excited) – “That’s amazing, any other bids? No? Going, going, gone!” hammer down “sold to bidder-2”

Yes, these auctions are indeed so dramatic and exciting.

Now that we already understand the English auctions, let’s learn the theory part of it.

By definition, the English Auction is a sale method in which an asset is sold by inviting bids that are ascending in value. A base price or a floor is set before the bidding starts and the bidders have to start bidding above this base price. The item is sold to the highest bidder.

There are some noted features of the English auction as follows:

Features of an English Auction

Other Types of Auctions

A Swedish auction is a less regulated version of an English auction. In this, the bidders are not bound by their bids and the sellers are free to accept or decline whichever bid that seems suitable or unsuitable respectively.

The Dutch auction is commonly known as Descending Price auction. In this, the auctioneer starts with the highest asking price and then the bids are received for a continuously lower price until all items are sold. This type of auction is usually used for bulk sale items, so that whole lot can be sold at once.

In this, the bidders submit the bids in a sealed envelope, and when the envelope is opened the sale is made to the highest bidder. It is also known as Blind auction because any bidder doesn’t know the bid submitted by other bidders.

In a Japanese auction, the bidders do not bid at all. The display price of the item on sale increases continuously as per the auctioneer’s clock. The buyers can exit the auction hall when they are not interested in buying any more. The last standing buyer wins the item on sale.1