Dumping is a term common in international trade. We can say it is an unfair strategy by an exporting nation to gain market share in the importing nation. In dumping, an exporting country reduces the price of their product to gain market share in the foreign market. The price at which the country exports are even less than the price they charge for the same product back home.

Moreover, the exporting country may even drop the price below the cost of the product to destroy the local competition. Later, when there is no local competition, the exporting nation raises the price. We can say that a higher price in the home market helps to subsidize the low prices in the foreign market. Dumping is thus a business strategy where price discrimination is practiced.

For example, a Chinese manufacturer sells a mobile in the U.S. for $200, but in China for $350. The cost of producing this mobile is $250. Such a tactic could disrupt the U.S. mobile industry.

The following are the reasons why an exporting nation goes for dumping:

Conditions for Success of Dumping

Dumping of a product by one country may not always be successful. Instead, there are a few conditions that help ensure the success of this international trade strategy. These are:

The following are the types of dumping:

A company practices this if it has a large amount of unsold inventory. In this, the company sells the product in the foreign market at a price that covers its variable and few fixed cost. Such a strategy may get success only if demand for the product in a foreign market is elastic, and the company has a monopoly in the home market. So, whenever there is a large inventory built up, to liquidate the same, this strategy is applied. So this strategy remains temporary to take care of the inventory liquidation.

This type of strategy is permanent, unlike the sporadic, which is temporary. In this, the company regularly sells the product in the foreign market at a price less than the domestic prices. Often, a company sells the product at a loss to gain entry and destroy the local industry. Once the company gains some degree of monopoly in the foreign market or a substantial market share, it slowly starts to raise the price. Previously, Hitachi did face accusations of using this strategy for its EPROM chips. 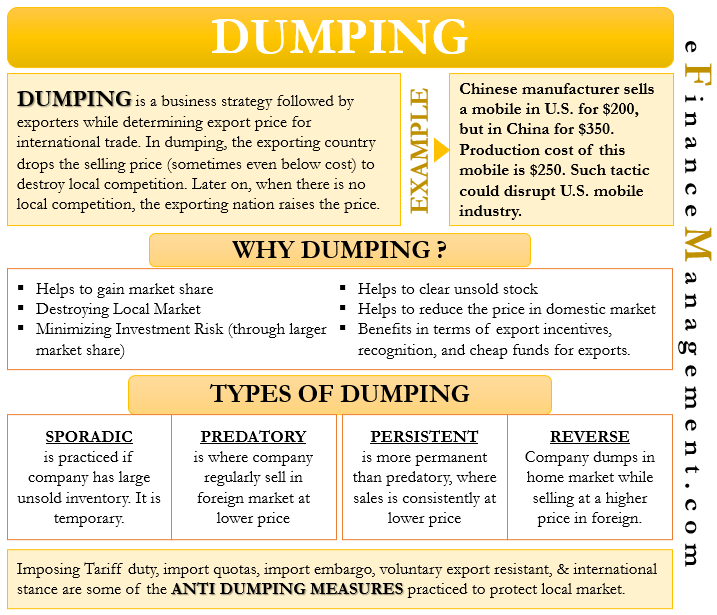 An importing country initially seeks help from international organizations, such as WTO, to prevent dumping. However, proving that a country is violating fair competition rules is practically very difficult. Thus, countries resort to anti-dumping measures to prevent the local industry. The following are the anti-dumping measures that a country may take:

In this, the importing country levies tariffs on the product. The tariff raises the prices of the imported product, and thus, narrows down the gap between the foreign-made and local-made products.

It is more of a retaliatory measure. Under this, a country bans some or all products from the dumping country.

It usually includes bilateral agreements between the countries to prevent the dumping of products. Both countries also decide on the set of rules that will lead to punitive actions and fines. In this case, there is a restriction on the export of products in general or a pre-set quota.

World Trade Organization (WTO) does not support dumping, but it does not prohibit it either. WTO reacts when a specific complaint is made. And Its decision is not universal and is on a case-to-case basis. Dumping is legal as per WTO unless the importing nation can prove its negative impacts on the local producers.

Some countries, however, make dumping illegal as it harms the local industries or companies and result in job loss. These countries use tariffs and quotas to protect the local market. Also, countries enter into trade agreements to save the local economy from the negative impacts of dumping.

Let’s take a real-world example to understand it better. In 2017, the ITA (International Trade Association) came out with a decision that the anti-dumping duty on Chinese silica fabric products is valid. In its investigation, the ITA found that China sells silica products at less than the product’s fair value in the U.S. As per the ITA, if the U.S. removes anti-dumping duty, the chances of dumping would rise.

Dumping may be wrong from an economic point of view, but they may have positive impacts as well. The following are how dumping has a positive effect:

Last updated on : September 10th, 2020
What’s your view on this? Share it in comments below.